A fair measure of black powder trickled down the bore. The joyous stench of the last shot hung all about; white smoke drifted overhead. Nimble fingers rolled two, dry, brown, red oak leaves, both with their stems broken off, into a sphere a little larger than the Northwest gun’s bore. The wiping stick tamped the wad firm on the powder. There was no need to rush. A plump gray squirrel lay in the leaves and duff beside the trade gun’s hunt-scared butt stock.

An equal measure of duck shot rattled down the warming, fouled barrel. The small, cowhide shot bag with the whittled stopper slipped back into the deerskin pouch, the one adorned with dyed deer-hair cones. A finger stuffed a single leaf—hand-sized, also without a stem and rolled snug like the others—in the smoothbore’s muzzle. Again the wiping stick seated the wad tight, sequestering the anxious swarm of death bees. Its work done, the hickory rod slid back into the ribbed brass thimbles.

On that pleasant October morn in 1796, my alter ego, the returned white captive, adopted and raised by Ziibi Ikwe (River Woman), stepped over a main branch of a downed oak top and disappeared back into the forest’s cover. Precious black granules from the bison horn’s spout half-filled the Northwest gun’s pan. The frizzen eased over the priming. The woodsman’s right thumb fidgeted on the hammer’s domed jaw screw as his back pressed against a rum-keg-sized branch. 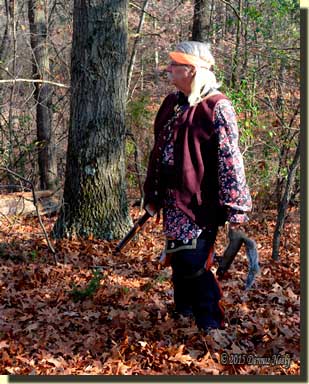 A while later, a pair of fox squirrels chased limb-to-limb, two knobs to the northeast, well beyond “Old Turkey Feather’s” effective distance. Nothing moved near the broken-up top, the fort of opportunity that morning. Even the song birds remained scarce. When a third fox squirrel joined the frolic, the time seemed right to abandon the fort and strike off on an impromptu still-hunt.

A slow, subtle, tree-to-tree stalk did little to disrupt the chasing, spiraling and occasional chatter. The commotion tended to add a sense of urgency to crossing through the little valley. When the trio concentrated on romping on the ground, the still-hunt’s pace quickened. Elk moccasins crept up the rise at a brisk walk. The “crunch, crunch, crunch, crunch” of a hopping fox squirrel forced my alter ego to tree behind a gnarly shagbark hickory. “Old Turkey Feather’s” muzzle eased around the hickory’s trunk. The trade gun’s turtle sight hovered in the direction of the rustling leaves. The moment of truth was at hand…

How Much Shot to Carry?

How much shot to carry on a traditional black powder hunt fueled a lively discussion. Opinions ranged from a few ounces to over a pound, and the answers were just that, opinions. The reasons behind the various expressed choices were numerous, too, with no consensus. No one cited historical documentation, and that is where the debate should have started.

In the late 1970s, when I bought the parts for “Old Turkey Feathers,” my love for bird and small game hunting drove the decision to select a smoothbore. Simply put, I wanted the versatility a barrel “without deep scratches” offers. Setting competition shooting aside, more shot has passed through that trade gun’s muzzle than round balls. And in those early years, the potential number of shots expected on a given jaunt to the Old Northwest Territory dictated how much shot to carry, which wasn’t a lot.

One of the best sources for trade values that is close to the late 1790s is the journal and ledger of Francois Victor Malhiot, a clerk for the North West Company at a fur post south of Lake Superior in the trading season from 1804 to 1805.

From Malhiot’s ledger accounts, a Northwest “gun” traded for ten prime beaver pelts in 1804 (Malhiot, 222). A “Double handful of Powder” and a “Handful of shot” sold for one “Plu” each, or “Plew,” as some other traders spelled the word for a prime beaver pelt (Ibid, 216). “Sixty bullets,” or round balls, cost two Plu, or a Plu (or its equivalent in hides other than beaver) bought a pound of round balls (Ibid, 218). As an aside, at thirty-to-the-pound, the average size round ball was about .537.

Out of curiosity, I measured out a half pint of #4 lead buckshot, and it weighed three pounds three ounces. I next scooped out a cupped handful of shot and it weighed one pound, which is more consistent with 30 balls priced at one Plu. I could not get two scooped-out handfuls to fill the half pint measure. However, if a trader poured the shot from a half-pint measure into a woodsman’s cupped-together hands, you would have “two handfuls” of shot. Now, with both hands full, how is a hunter going to put the shot in his pouch or a shot bag?

Curot’s demiard volume comparison muddies the waters more than it clarifies the trader’s practice. To confuse matters more, Malhiot’s accounts show a number of transactions for two handfuls of shot. Did he use a fixed measure and pour the shot into the hunter’s hands, or did Malhiot twice scoop out shot with his cupped hand? In addition, the three pounds of shot contained in a half-pint measure would have been a real bargain from the consumer’s standpoint, which is inconsistent with the general trading policy of getting the most pelts for the least amount of goods.

Likewise, I find no primary documentation for what type or size of container a backwoodsman kept his shot in in the 1790s, especially among the Native American hunters like John Tanner. It is possible that they just dumped the shot into their shot pouch. But traders offered several sizes of shot and some of the old journals specifically mention a shot size when loading for the chase. So did a hunter carry more than one size of shot? In my research, I never paid attention to whether a hunter hero mentioned multiple shot sizes within the same general time frame, and that is an unforeseen oversight on my part.

For convenience during deer season, I carry my seven round balls (that number is based on an entry in John Tanner’s journal: Tanner, 115) in a small cowhide ball bag. When not deer hunting I carry the balls loose in the pouch, which is what I believe Tanner’s habit was. From in-the-field practical experience, digging around in the pouch for the last one or two balls takes a lot of effort and is not efficient from a veteran hunter’s perspective.

I have never carried my birdshot loose in the pouch. “Messy” and “unworkable” are the first thoughts that come to mind for measuring out a charge when the shot is stored in such a manner. But, as a living historian seeking the knowledge and understanding of how our forefathers lived, survived and hunted in the Old Northwest Territory, I shall test this hypothesis through experimentation in the wilderness classroom. That is not the intention of this post—but worthy of future consideration.

Based on the accounts of Malhiot and Curot, I limit the amount of shot carried to under a pound. This assumes some usage after leaving the trading post with a beaver pelt’s worth of shot. I have a drawstring deerskin pouch that contains buckshot, a “half-kidney” deerskin pouch with a branch-carved spout, fashioned after a late-18th-century example, for #4 lead birdshot, a similar pouch for #4 Bismuth non-toxic shot, and a cowhide bottle-shaped pouch for turkey hunting.

On average, I carry about six or seven 1 1/4 ounce charges of shot, depending upon the location of the hunt and/or the circumstances of the scenario. I don’t recall ever running out of shot while hunting, either for a day hunt or a weekend camp situation. Twice that I can remember, Old Turkey Feathers held the last charge of shot, but neither swarm was ever unleashed. And that includes almost forty years of delivering death messages… 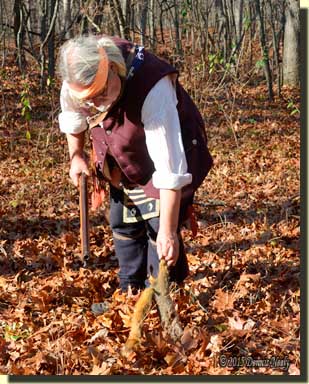 In a flurry of heartbeats, a fox squirrel ran across the leaves, eighteen paces distant. The squirrel scampered westward, then bounded up on a gray, barkless tree trunk, sprawled on the forest floor in a gentle arc. The turtle sight followed. When the fox squirrel reached a broken stub just past the log’s center, it stopped and sat upright with its bushy tail curled up its back and over its head.

The fox squirrel disappeared in a roiling cloud of white smoke and sulfurous stench. Adhering   to the endless circle of life in the wilderness of the Old Northwest Territory near the River Raisin’s headwaters, the death bees delivered another fatal message.

6 Responses to Delivering Another Fatal Message