“…the next best choice…”

Two sizable flocks of Canada geese fed in the small pasture the previous night. An hour before, well to the west, the birds cupped their wings. A stiff east wind aided a gentle, almost mystical, descent. The geese took flight after dark with a great clamor of “ke-honks.” The rain showers started about then, too. This was in the fall of 1794.

At the north edge of that flat, grassy field, the ground fell off to a sharp, abrupt slope. The only tree that grew within a hundred paces, a bushy red cedar, stood guard just ahead of where the geese stopped feeding. Well to the northwest a linen and leather clad woodsman hid under a dozen cornstalks, keeping a keen eye on promising knob in a cut cornfield. 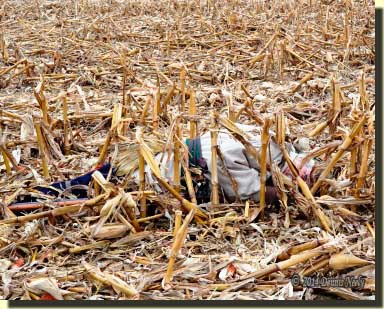 The first flock of nine circled that knob once, swung wide to the west, then curled back east. That was when they set their wings and drifted into the pasture. There is no accounting for why God’s wild creatures do what they do.

A flood of disappointment and frustration swept over the hunter as he eased his thumb from the domed screw that held the sharp English flint firm in the hammer’s jaw. The second flock flew from the south. Their course never changed; the pasture chosen at least a mile away.

At dusk the woodsman rose to his knees, pushed away the tawny-colored stalks, and staying bent forward, made for the security of the oaks and hickories. A quick walk through the trees, a scamper around the cedar grove and a careful snaking up the valley to a massive, time-scarred oak gained a vantage point for the post hunter to observe the geese. With little twilight left, he sat behind the rough-barked monarch and waited until the geese flew off to spend the night on the River Raisin’s tranquil water.

The lone cedar tree kept weaving its way in and out of the hunter’s dreams that night. First light found him twisted in an awkward shape—half sitting, half laying, struggling against the steep slope—under that cedar’s boughs. Twice he had to get to his feet and stretch aching muscles. The second time the wary backwoodsman stood for maybe twenty minutes. Then two Sandhill cranes circled in from the river.

Soaked from the wet grass and a tad chilly, the determined hunter returned to the uncomfortable abode. A couple minutes later the two cranes angled back to the seven-acre parcel’s north boundary and landed a dozen paces in front of the skimpy cedar fort. The fear of the big geese choosing the knoll in the cornfield evaporated. Blood vessels pulsed as they do when a fine buck, head down and sniffing, wanders near on a well-worn trail.

Geese ke-honked unseen in the distance. Nine birds, grouped five and four, winged low over the western tree line. There was no pretense of caution, no circling, no stretching of necks, no spiraled descent, only a muffled, steady honking.

A quarter mile out the great wings ceased flapping and held firm, outstretched. Gray shapes lost height as they came closer; the black wing feathers looked like long slender fingers. Even with the monarch oak, the flock fell silent. Both cranes stood erect and watched.

The Northwest gun’s muzzle slipped from the sanctity of the cedar’s hug and lurked in the direction of the long-legged cranes, but meant them no harm. An impatient thumb pressed hard on the hammer’s jaw screw. The sear dropped into the tumbler’s full-cock notch as I worked the trigger to avoid the loud “click.” The sharp English flint, now at full attention, awaited the impending order to release the death bees. “A clean kill, or a clean miss. Your will, O Lord,” passed over my lips.

The ke-honking faded into silence. Two geese became sentinels for the flock, each standing erect as the cranes had done. The rest, including the two cranes, pecked at the ground as they walked southward. I rolled on my back, content to listen for any sound of alarm as I contemplated the next best choice…

Taking advantage of a circumstance witnessed in the wilderness classroom is common for traditional black powder hunters. Still-hunting enhances the possibility of finding some types of game, but a still-hunt is not always the best choice for migratory birds. Regardless, the first obstacle is studying the game and selecting a location that has a high probability of at least seeing a backwoodsman’s chosen quarry. The second obstacle is getting close enough to affect a clean and humane shot, given the limitations of the arms used by one’s 18th-century persona.

A recent research project found me rummaging through Alexander Henry’s experiences at Fort Michilimackinac during Pontiac’s Rebellion in the summer of 1763. One of the passages marked in his narrative carries several notations, because of the various aspects of daily life contained therein:

“In going down the side of a lofty hill I saw a herd of red deer approaching. Desirous of killing one of them for food, I hid myself in the bushes, and on a large one coming near, presented my piece, which missed fire on account of the priming having been wetted. The animals walked along without taking the least alarm; and having reloaded my gun, I followed them and presented a second time. But now a disaster of the heaviest kind had befallen me; for on attempting to fire I found that I had lost the cock. I had previously lost the screw by which it was fastened to the lock; and to prevent this from being lost also I had tied it in its place with a leather string; the lock, to prevent its catching in the bows, I had carried under my molton coat.” (Armour, Attack, 87 – 88)

This passage generates a number of questions, and each is worthy of further discussion and research. The phrase, “…I had lost the cock…” catches most time traveler’s attention. The ensuing statements about how Henry tried to remedy the situation and the resulting consequences usually spawn either a moment of personal reflection or an outright debate centered on the harsh reality of wilderness survival.

However, on that occasion my focus centered on the word “cock,” meaning the lever that transfers the force of the mainspring into motion that drives the flint into the steel and thus showers sparks into the powder in the pan.

Once in a while a living historian will mention that my writings do not use the proper 18th-century terminology for this portion of the machine we call a flint lock, but rather the modern name of “hammer.” And further, they point out that the “frizzen” should be called the “hammer,” “steel,” or “battery” of the lock if I am to stay true to character in the purest 1794 sense. 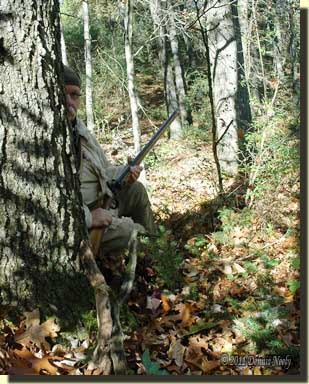 Conscientious living historians feel a deep sense of obligation when it comes to putting forth an authentic and meaningful portrayal. This is true whether engaged in a solitary pursuit on the family farm or at a noted museum, recreated village or remote area of historical significance.

But there are circumstances when measured compromise overrules blind adherence to period-correct terminology. I believe such is the case when writing for general public consumption.

In my experience, the unique nature of this hobby draws interest from a broad cross section of people. The vast majority of my readers are not traditional black powder hunters—almost half are not even hunters. However, the unique nature of the traditional hunting stories and/or the historical perspective presented in these 1790-era adventures keeps them thumbing through the pages of a print publication or browsing online in search of more exploits.

Thus, it is their basic understanding of the arms of the ancients that drives my selection of words such as “hammer” and “frizzen.” To those “in the know,” such verbiage is incorrect, for some, even a mild form of heresy. But the point of my scribblings is to promote and showcase this glorious pastime to those individuals who will never step over time’s threshold. For them, the next best choice is the best choice.

Think of your listener before you speak, be safe and may God bless you.

One Response to “…the next best choice…”