Posted on May 17, 2017 by Dennis Neely: Traditional Woodsman

Thorns tugged at a trail-scarred buckskin leggin. A single claw caught, but broke away from the purple stem. The raspberry switch swung free, then caught in the thin grass. Elk moccasins whispered on as the earthen doe trail wandered deeper into the cedar grove, then leveled out at the mouth of an old wash.

A deer’s leg bone, bleached white and gnawed some, lay on a saddle-sized pad of green moss a few steps to the right. Three cedar trees, tented together by an ice storm several winters prior, offered the best concealment. The leather portage collar slipped from the woodsman’s shoulders, and after a look about, the wool bedroll eased into a space hacked away by a tomahawk the fall before.

It was a week before Thanksgiving, in the Year of our Lord, 1794. “Bring back venison,” the clerk of the trading post said. The humble ambuscade in the midst of the cedar grove seemed the best choice to fulfill that urgent request. Unseasonable warmth marked that fall, which assuaged the pressure to produce meat and made each day’s hunt all the more enjoyable. A gentle southwest breeze pushed the hunter’s scent away from the trails that led into the grove from the big swamp. 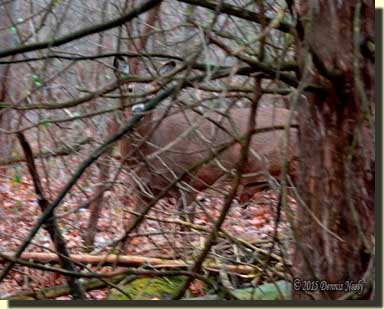 A doe and two summer fawns lollygagged in the grassy clearing at the cedars’ edge, to the south near the big cottonwood. A hushed bleat from the matriarch ushered the three into the grove. They angled up the hill and away from the humble fort. Two single deer followed about fifteen minutes later.

Dusk was not that far off. Glimpses of lavender and pink clouds began appearing through the canopy of intertwined boughs. The smell of wood smoke from the nearby settlement wove its way in and out of the tight-packed cedar trees. The scent did not seem to disturb the deer as a lone, antlerless shape approached the grove on the trail that led past the cottonwood. As I watched, I looked up, and with a fresh whiff of smoke in my nostrils, I considered the consequences of an unintended conflagration in that cedar grove.

A Wildfire Threatens the North-Forty

A somewhat urgent telephone call halted the retelling of an 18th-century adventure. My mind was anywhere but 1794 as I walked around the pickup to head to town. When I opened the truck door, I saw an ominous white cloud of smoke boiling up from the south edge of the North-Forty. A stiff, southeast wind pushed the smoke away from my vantage point. A half mile to the west, a red light flashed, which compounded my concern. 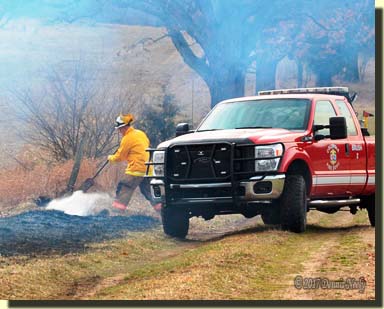 A hasty detour put the pickup on the wagon trail that so often leads to yesteryear. Smoke engulfed the ruts and shrouded the cedar grove. As I headed up the last rise, I saw the fire department’s grass rig speeding across the neighbor’s alfalfa field. The fire line was but a pittance from those cedar trees.

This time of year I carry a broom rake in the back of the truck; it’s an old habit. I’ve stopped, or at least slowed down, a lot of small wildfires with that rake. I expected to do the same in defense of the North-Forty, but the grass rig headed for the fire’s point and cut off the advancing flames.

A week or so before, the farmer who rented the neighbor’s ground brought in a backhoe, hydra-hoe and a Case 850 dozer to clear the two fence rows that divided the three fields. I thought that Mr. Wesch would have been horrified, but farming practices must plod on. The workers placed and packed the trees, limbs and brush in two large burn piles. The one closest to the property line held an old round hay bale that they ignited a day or so later.

The bale and surrounding brush burned out, or so they thought. The southeast wind, coupled with a warm dry day brought the bale’s embers back to life. The fire advanced down the boundary fence row like a snaking trail of gunpowder from a keg.

In the 18th century, fire played an integral part of daily life and survival. The old journals sometimes mentioning “kindling a fire,” but beyond that, fire was so commonplace that it rarely seemed worthy of mention. In contrast, most moderns have lost their connection to fire, other than a gas stove burner or outdoor grill. Lighting a campfire now highlights holiday festivities or special occasions.

John Tanner, the Falcon, notes the catastrophic side of fire in a couple of passages:

“We had, on one of our hunting paths, a camp built of cedar boughs in which we had kindled fire so often, that at length it became very dry and at last caught fire as we were lying in it. The cedar had become so dry that it flashed up like powder but fortunately we escaped with little injury…” (Tanner, 23)

“At the same time I started to hunt, the old woman started for Waw-be-be-nais-sa’s lodge, intending to be absent two days. The lodge was left in the care of Skawah-shish, as the Bowwetig girl was called, and Ke-zhik-o-weninne. When I returned late at night, after a long and unsuccessful hunt, I found these two children standing, shivering and crying by the side of the ashes of our lodge, which, owing to their carelessness, had been burned down, and everything we had consumed in it. My silver ornaments, one of my guns, several blankets, and much clothing, were lost…” (Ibid, 67)

I find it interesting that both of these events involve shelters constructed of cedar boughs. Although Tanner does not say, I believe he is speaking of white cedar rather than red cedar, but these lessons in the wilderness classroom carry the same impact. The trading post hunter persona constructed a “bush shelter” following the description in Meshach Browning’s narrative, and one of my alter ego’s great concerns was catching the shelter cover, the cedar boughs, on fire.

The journal of Duncan M’Gillivray, a clerk for the North West Company at the Fort George post in 1794, speaks of the prairie fires:

“Octo: 10th…The Plains arround us are all on fire. We hear that the animals fly away in every dirrection to save themselves from the flames…The Indians often make use of this method to frighten away the animals in order to enhance the value of their own provisions. We are almost suffocated with the smoke…” (M’Gillivray, 32-33)

But James Smith offers the Native American perspective on the wildfires:

“When we came to this place [Sandusky plains in northcentral Ohio] we met with some Ottawa hunters, and agreed to take, what they call a ring hunt, in partnership. We waited until we expected rain was near falling to extinguish the fire, and then we kindled a large circle in the prairie. At this time, or before the bucks began to run a great number of deer lay concealed in the grass, in the day, and moved about in the night; but as the fire burned in towards the centre of the circle, the deer fled before the fire; the Indians were scattered also at some distance before the fire, and shot them down every opportunity, which was very frequent, especially as the circle became small. When we came to divide the deer, there were above ten to each hunter, which were all killed in a few hours. The rain did not come on that night to put out the outside circle of the fire, and as the wind rose, it extended thro the whole prairie which was about fifty miles in length, and in some places nearly twenty in breadth…” (Smith, 100)

Jonathan Alder learned the hunting technique of the ring fire from his adopted Native kinsmen, and from his narrative it appears Alder used this technique on a somewhat regular basis, as long as the right conditions existed. But ring hunts were not free of danger or consequences, as Alder explains:

“…I was staying on the Darby Plains before there was any whites here. I went out one day to make a ring fire and capture a few deer. The grass was very nice and dry for burning…I cut some of the long grass and made a torch, and set it afire. Then I ran with it, circling around and taking in three or four thousand acres. Then, I got inside of my ring and it soon made a fine fire all around. Very soon I saw deer running from one side to the other. In my ring, I killed seven deer. When I would kill one, I dragged it into a thicket where there was no grass and scraped the leaves away so as not to have the hide injured by the fire.

“At last, the fire began to close in on me, and it burned very rapid. I could see no good place to escape. I looked me out a good piece of ground where there was no brush and when the fire began to get pretty warm, I put my powder horn under my arms and fired off my gun, then leaped. I had wrapped my blanket tight around me—head and face all covered…I was perfectly blindfolded…the fire was then a perfect blaze ten or fifteen feet high, and I started and ran through it. The main blaze was not more than thirty or forty feet wide, but I ran about two hundred yards before I uncovered. I was out of the main fire, but it was still burning and I had to run further to get entirely out of the fire on account of my powder horn. My moccasins was entirely ruined and my leggings and blanket nearly spoiled. I hunted up the deer and skinned them. Some of them had their hair pretty well singed off, but the hides were not injured. But that was my last ring fire. (Alder, 133)

Fire, productive or destructive, harbors the same finality as death: after its passing life has changed and there is no going back. As I stood over the charred fire line and looked at the cedar grove, I envisioned a wildfire racing through the dry boughs. There would be no stopping it, only coping with the aftermath. A cold shudder ran down my spine…

Never leave a fire unattended, be safe and may God bless you.