Close-growing, arm-sized slash oaks grew to the north and south. Tall red cedar trees and older oaks lined the edge of the big swamp. A small cluster of cedars protected the steep hill’s crest. On that cold, odorless November morning in 1794, a biting wind gusted up the slope. Bare cheeks tingled. Eyes teared. The post hunter’s nose throbbed under the bridge of his round, brass-framed spectacles.

Wrapped in a red trade blanket, the woodsman watched a large doe and three yearlings leave the snow-covered sedge grass using the broad trace that snaked from the north island. These deer turned south and stepped behind the barkless, spear-like upper limbs of two cut-over oak trees. The older doe lingered. A dozen minutes later, crunchy splashes in the willows between the two islands, suggested a reason for the doe’s hesitation.

The Northwest gun’s turtle sight crept in the direction of the sporadic splish-splashing.  The smoothbore’s muzzle eased over the larger branch in the oak top that concealed the woodsman’s deathly shape. A nervous thumb pressed upon the domed jaw screw, waiting for a long-tined reason to call the sharp English flint to attention.

Three crows flew low over the willows, bantering back and forth as they winged west. The “caw, caw, caw, cawing” overpowered the soft splashing that betrayed the mystery deer’s progress. After the ruckus passed, the hillside returned to a quiet sanctity as the last white tail twitched into the cedars and hardwoods to the south.

With time, the Northwest gun pulled back; the lock slipped under a blanket fold. A drip from a chilled nose fell on the red wool as a stiff gust cut through the blanket, eliciting a tolerable sense of discomfort. In the distance, a wild turkey clucked three times. The chickadee flitted back and perched upon a firmer twig that did not bounce. The wilderness tenant offered no song; rather, it just sat and watched the perceived nothingness of that 18th-century moment.

A single doe walked over the small knob to the north, one path up from the first four. This full-grown deer plodded along with a half-drooped head that bobbed with each step. It did not look side-to-side, flip its ears or exhibit any concern for possible danger. It passed behind the great oak without hesitation and trudged on, twenty-two paces upwind of the lair that harbored the anxious death sphere.

A while later, light snow began to fall, first as little round balls, then as petite flat flakes. An elbow pulled the flintlock closer to the woodsman’s body, not that it was in any danger of wetting, but more as a reaction based on experience. Only the hunter’s eyes moved as he kept close watch on the hillside. Here and there a single, lingering leaf fluttered, but neither fur nor feather ventured forth…

The Joy of an Ordinary Sojourn

A great joy exists in any sojourn back to a beloved bygone era. Like so much of life, an outside observer cannot imagine such elation without experiencing time-traveling heartbeats firsthand.

To be sure, the intent of that morning’s simple pursuit was acquiring fresh venison for the family dinner table. With few exceptions, from mid-September through the following March, each trip to the Old Northwest Territory falls into the category of game-gathering. Even when the primary consideration is an excursion into the wilderness classroom, “Old Turkey Feathers” contains a full charge, “just in case…”

Here and there, an old journal will relate a note-worthy hunt that will begin by happenstance. Such is the nature of the glade and the backcountry woodsman’s lot. And such is the living historian’s lot as he or she attempts to relive yesteryear—one exploit at a time. But to experience the texture of life in a bygone era, the traditional black powder hunter must first immerse his or her being in that chosen time. Without a total commitment, to the best of one’s ability, the exhilaration of living through a pristine 18th-century moment is not possible. 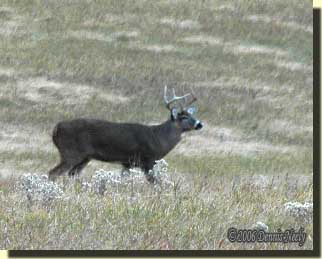 On that morning, suppose the fine buck exited the snow-covered sedge grass and sniffed the path taken by the doe and three yearlings. The Northwest gun was already up. The turtle sight lurked near that earthen ribbon. With little effort, the sharp English flint rose to attention in anticipation of dispatching the anxious death sphere.

As this unfortunate forest tenant pauses behind the barren tree top, the turtle sight grabs at a small tuft of hair over his vitals. With steady pressure the sear’s nose slips from the tumbler’s notch. Yellow sparks streak. “Kla-whoosh-BOOM!” A thunderous roar rumbles through the hardwoods and cedars on the ridge’s eastern slope as orange fire and white smoke boils from the Northwest gun’s muzzle…

Given that one change in circumstance, an ordinary day might have transformed into an extraordinary pristine moment from 1794. “What ifs” are fun, but they do not fit reality, at least for this woodland wanderer.

What is important for the traditional woodsman is not the taking of game, but the preparation to do so in a period-correct manner. And once in the field, the burning desire to make meat permeates every second, but the opportunity must be present. This is the nature of the hunt, be it modern or traditional, undertaken in 2017 or 1794.

I do not remember when I slipped time’s shackles, and I made no notation in my journal after the fact, as I so often do. But based on research and experience, my alter ego, the trading post hunter, did his best to emulate the writings of a composite of hunter heroes. Further, he sat within the debris of an oak tree top, huddled in a red-wool trade blanket watching the natural drama of a late-18th-century November morning unfold.

That historical simulation was unscripted, as it always is. So often modern hunters feel a bird or animal’s decision, based on survival instincts, is the deciding factor between a successful day and a total bust. That is not the case with the traditional hunter. The passionate desire to relive the past, to immerse oneself in what once was, primes the mind to accept an ordinary day with great rejoicing.

For the living historian, pristine moments know no bounds and are not dependent upon the taking of game—and for that matter, even seeing game. To exist in a 1794 environment and experience the tolerable discomfort of a stiff gust cutting through a wool trade blanket is sufficient to deem a morning successful.

2 Responses to A Tolerable Discomfort