A solitary gray head appeared. A young wild turkey stretched its neck, then cast inquisitive glances side-to-side in the deep prairie grass. The petite bald head disappeared in the shadows. Here and there a grass blade twitched. A bronze-feathered shape came into view, then vanished. Several gray heads popped up, then pulled back into the cover.

Tall cedar trees and clumpy prairie grass hid an old ravine, six paces to the north. The flock’s matron stood guard behind a large red cedar tree. Her head twisted and turned in the spaces between boughs. Her body was not visible, and if a woodsman did not suspect she was close by, her presence would go unnoticed. 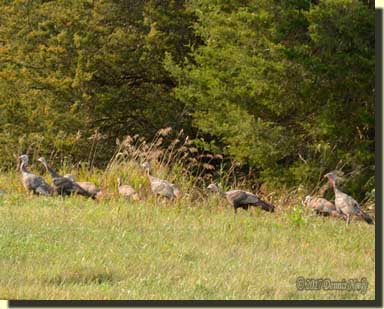 Minutes later, a wayward youngster stepped from the thick, pale-green tangle. Another ventured forth, and then another, each basking in the warm afternoon sunlight. The birds pecked and poked in the sparse cover as more siblings emerged. In time, the entire flock stood exposed. The caution of the old hen increased.

The birds of this flock were small for mid-September, and the brood appeared to be a second or perhaps late hatch. They wouldn’t offer much meat. Meshach Browning came to mind. He wrote of taking young turkeys for the dinner table. His wife, Mary’s, eldest sister came to visit:

“…as she arrived at one o’clock in the day, Mary asked me to bring home some young turkeys for supper. Telling her I could soon do that…Into the glades I went, where I soon saw three or four old turkeys, with perhaps thirty or forty young ones. I sent Watch [Meshach’s dog] after them, but they flew into the low white-oak trees; and when I would walk fast, as if I was going past them, they would sit as still as they could, for me to pass on; but after walking twelve or fifteen steps, I would stop and shoot off their heads…” (Browning, 122)

In all, ten turkeys herky-jerked into the open. The old hen stayed in the shadows with her neck stretched high. She uttered a soft “putt” now and then as her keen eye slashed away at downed logs and adjoining autumn olive bushes. As the flock flowed west, the concerned hen slipped away. The birds strung out as they pecked along, never more than a few turkey-strides from the sanctity of the deep prairie grass and seclusion of the old ravine…

The More We Learn, The Less We Know

This was the summer that “wasn’t.” One family crisis after another kept (and still keeps) me from time traveling and writing more than the bare minimum. Learning to appreciate stiff-backed emergency room chairs, avoiding hoof-and-mouth disease in crowded waiting rooms and clock-watching are not my idea of worthwhile hobbies.

Carrying one’s own reading material is a must, if you want to avoid a plunge in the sheep-dip tank after handling “waiting room magazines.” Plus, living history and hunting of any kind are not the subject matter of those tattered missives.

And yet there is a ray of sunshine, at least I thought there was. The other day a “hunting magazine” peeked out from beneath a pile of celebrity tabloids. I fought the urge valiantly, really I did, but ended up picking up that fall hunting issue. Low and behold, it was dated “2017.”

A broad-beamed, thick-bodied, record-book whitetail buck graced the front cover. A full-page advertisement on the inside cover page touted the absolute necessity of using a known brand of camo. The pages contained one must-read columnist’s insight after another. Forty-five minutes of skimming reinforced my worst fear—I know nothing about hunting deer, and by inference, wild turkeys, small game and waterfowl.

I was practically in tears when a writer explained why “Old Turkey Feathers” needed a plastic-jacketed bullet. Another told me there is no hope of getting close to a white-tailed deer with a captive’s humble attire. Those rags must be burned—I made a note to apply for a burning permit first.

A few pages later, I discovered deer cannot be killed from the ground; I’m supposed to be shooting from a metal doily strapped up in a tree, facing west, or is it east? And in the spring, the farmers from around the settlement must gather and plow up the North-Forty. For all these years, the wrong grass grew; a new seeding will provide a proper home for the deer, turkeys and other small critters. Oh, the misery of it all!

The worst problem with picking up that magazine is it raised doubts about my woodland knowledge and methodology—all from the influence of one issue’s writings.

To be fair, the habits of the creatures of the wild are in a constant state of change, but that is the nature of the wilderness experience. Woodland knowledge and the skills needed to take advantage of that understanding must change, too. Constant learning, constant improvement, and constant adjustment are, and have always been, a hallmark of a productive hunter.

The term “productive” comes with its own set of qualifying parameters that vary from person to person. It is no secret that we manage our deer herd and restrict the taking of animals. Young bucks or undersized wild turkeys get a pass, but that does not mean they avoided walking or strutting in front of the turtle sight. In general terms, “productive” applies to any individual who understands wild game, can find the birds or animals he or she seeks and can place himself or herself in a position to take a clean and humane shot, day after day—if they so choose.

One of the first lessons learned when I veered from the path of a modern hunter was to question and evaluate every hunt. With time, this habit becomes instinctive for the traditional black powder hunter. Self-valuation is a mainstay of living history, and I think even more so for one who relives the simple pursuits of long ago.

A few weeks ago at the Woods-N-Water News Outdoor Weekend I explained the living historian’s constant process of evaluating a persona based on the historical record. One lady who was a sewing instructor spent a lot of time looking at Msko-waagosh’s linen outer shirt. She said she liked to study older garments as a source for learning technique, and she commented in a positive way on the stitch choices and the simplicity of the common 18th-century trade shirt. 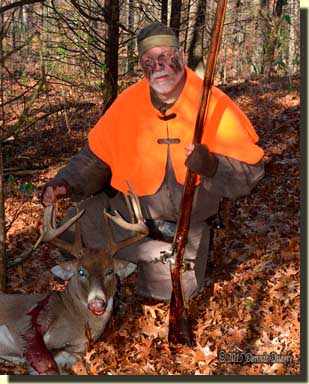 Another discussion centered on a photo of Darrel Lang’s buck. The individual wanted to know what brand of tree stand he used. Questions about camouflage patterns came next, along with a query about how far away the deer was. Over the course of the next few minutes, Darrel answered that he was on the ground, wearing the clothing he had on at the show and that the buck was about 20 paces distant.

With each answer, the man’s face reflected his growing surprise at the answers. As it happened, there were two other traditional hunters in the camp, and they all confirmed the methodology of the traditional black powder hunter.

As we spoke about the reactions later, I postulated that modern hunters are so programmed with the “you can’t…unless you use…” statements that they have no idea how their grandparents hunted, let along their grandparents’ grandparents a century or more removed. There is little doubt such arguments are powerful sales tools, and with constant repetition, very forceful persuaders.

Each time I present the traditional hunter’s lifestyle at a show or seminar, there are a fair number of people who do not believe Old Turkey Feathers, or any antique arm, is capable of bringing food to the table.

In contrast, there are folks like one gentleman in particular who explained to his teenagers, “This is the latest technology of the time.” He had questions regarding ballistics, and when I answered, he made an interpretive comparison for his children specific to the arms they are using. He did the same for the clothing and the accoutrements. His children are lucky.

The rest of the guests fall somewhere in between the two extremes; they appreciate the demonstrations and displays, which act as a tempering force to the modern world’s repeated misconceptions, or at the least, misunderstandings. And quite often, I find myself embarking on a mini-seminar, explaining the intricacies of a still-hunt, how to undertake a stalk and the importance of using natural ground structure for concealment and ambush.

For me, it is hard to remain cognizant that sitting and watching a flock of young turkeys, which is all too common for the traditional woodsman, is not the norm for a majority of modern hunters. The concept of becoming a wilderness tenant is just as foreign, given the back-slapping and disrespectful celebrations broadcast by some of the popular outdoor media personalities when a game animal or bird surrenders its life.

For the traditional black powder hunter, the self-evaluation regarding woodland skill proficiencies, coupled with the constant researching and comparison of our portrayals to those recorded in the journals of our hunter heroes, exerts a humbling pressure on each and every time-traveling adventure. In essence, the more we learn, the less we know…

5 Responses to Relying on Constant Self-Evaluation