Time to Move On…

Keen eyes scanned the rise and the ridge crest beyond. The Northwest gun’s tarnished brass butt plate rested on a moccasin. The hollow silence returned as the trudge continued on that glorious morn in 1796. 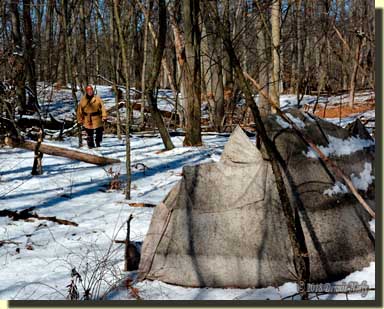 At the tipped sassafras, the next pause brought the little valley into full view. The wigwam’s domed crown appeared jagged and torn. A faster-paced course snaked around the red oak’s splintered trunk and toppled log. The calamity came into full view: grayed canvas, broken cherry saplings and globs of snow caked in shadows that should not be.

Wet snow covered the fleshing beam. Geese began ke-honking near the River Raisin’s sandy shallows. Msko-waagosh concentrated on the canvas shelter and not on where he walked. Barberry spines tore at bare flesh on the woodsman’s left inner thigh. The sharp pain brought a halt to the haphazard advance. The wigwam was gone; the damage from February’s heavy snowfall was too severe to repair. 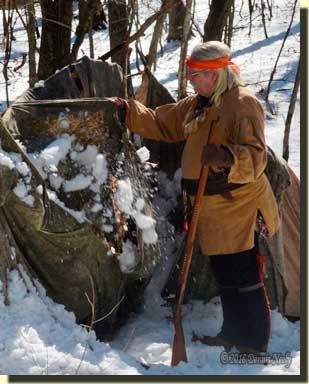 Red Fox circled the downed dome. It appeared that rain wet the covering, then the snow fell, freezing white clumps here and there and binding canvas pieces to the forest floor. The smoke flap hung straight up and down, limp like a fallen battle flag; the prop-pole leaned against the east upper rib the same as it did during the fall hunts.

That side still stood and would have provided an evening of comfort, were it not for the sunset side being frozen flat over the fire pit. A butcher knife cut a few threads that held a canvas panel to a horizontal rib. Pulling the stiff fabric back did little to uncover the cause of the collapse. Broken bents and ribs, some exposed and some hidden, held the remaining three or four canvas panels up.

A few minutes of quiet contemplation and rehashing melancholy memories gave way to the realization nothing could be done until the March thaw. Rebuilding would be left for another day, perhaps in a month or so. With geese ke-honking on the River Raisin, Msko-waagosh decided it was time to move on…

The Unfortunate Demise of a Wigwam…

Late one November morning, Msko-waagosh wandered to his wigwam. Raindrops pitter-pattered on fallen leaves. The dome-shaped shelter in the little valley offered a quiet respite from the storm. My alter ego left the flap open, sat to one side and watched the ridge to the south and west for passing deer.

In the height of the rainstorm, I started looking around the wigwam. At the third horizontal rib, one of the bents had cracked and lost its curved shape. After careful examination, I found two other breaks. A few days later, after the shelter dried out, I returned and lashed the wild cherry saplings together. 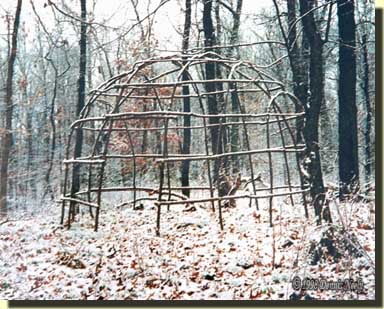 The degree of rot and the speed with which the bents and ribs deteriorated bothered me. The last wigwam saplings outlived the canvas. They survived for five seasons. I abandoned that structure when my persona changed. Unfortunately, the only pictures I have are of the bare frame after a December snowfall. I expected the same longevity with Msko-waagosh’s wigwam, but that is the way of the forest…

My alter egos like to hunt from a period-correct structure. A few years back, the trading post hunter built a simple lean-to patterned off one described by Meshach Browning. My hunter hero called his a “bush-camp,” because it was covered with pine boughs. He noted that the pine-bushes “were very dry…” (Browning, 110)

Cedar boughs covered the rafters of my bush-camp, and they became very dry. I felt a kinship with Browning when I noted that occurrence. The cedar branches also harbored a sizable herd of mosquitoes in the warm months. The smoke from a smudge fire did little to drive off those blood-thirsty beasties. Browning failed to mention that phenomenon, perhaps he did not experience that woodland joy?

“…I made the fire, then stood my rifle against the tree which formed the mainstay of the camp, hung my bullet-pouch, containing half a pound of powder and twenty or thirty balls, on the muzzle of the gun…While the girls were busily fishing, the fire had crept along in the dry grass, and got into the bush-camp, which was burned up, and thence the fire had communicated to my powder-horn. My gun was considerably injured, but not so much as to hinder me from using it…” (Ibid)

Many times the simple act of leaning “Old Turkey Feathers” against that oak’s trunk fostered a pristine moment shared with Browning. Little did I realize the danger I was in when I napped in the pleasant confines of that shelter.

Early in April of 1794, the trading post hunter passed by his bush-camp an hour before noon. The day was sunny and warm, too nice to spend in camp. An hour after noon, my alter ego circled south and again passed by the brush-covered lean-to. It was flat on the ground, crushed by a powder-keg-sized, living limb that tore free for no apparent reason and fell square across the ridge beam. Such is the way of the forest…

A couple of shelters have just rotted away, victims of historical neglect. The canoe-tarp lean-to station camps afforded one season in a chosen location. They were packed up in late December, relocated in the spring and moved again when the snow accumulated.

The “duck camp’s” rafters still stand, but God has reduced its cedar-bough skin to an ankle-high pile of twigs. If I’m not mistaken, a British ranger assigned to Joseph Hopkins Company spent time at that lean-to this past fall. Hopefully, with the help of three grandchildren, that camp will see new life later this spring.

The research surrounding the birth of Msko-waagosh brought with it similar stories of the abrupt end of hunting camps. Early on in his narrative, John Tanner, The Falcon, told of the demise of his own bush-camp:

“We used to hunt two or three days’ distant from home, and often returned with but little meat. We had, on one of our hunting paths, a camp built of cedar boughs in which we had kindled fire so often, that at length it became very dry and at last caught fire as we were lying in it…” (Tanner, 23)

Later in his journey through life, John Tanner lost another “lodge.” He does not describe this dwelling, and oh, how I wish he had!

“…When I returned late at night, after a long and unsuccessful hunt, I found these two children standing, shivering and crying by the side of the ashes of my lodge, which, owing to their carelessness, had been burned down, and everything we had consumed in it. My silver ornaments, one of my guns, several blankets, and much clothing, were lost. We had been rather wealthy among the Indians of that country; now we had nothing left but a medicine bag and a keg of rum…” (Ibid, 67)

But fire was not the only danger. Enter the devious creatures of the glade:

“One day, when I had killed a moose, and gone with all my family to bring in the meat, I found on my return, the wolves had pulled down my lodge, carried off many skins, carrying-straps, and in fine, whatever articles of skin, or leather they could come at. I killed great numbers, but they still continued to trouble me, particularly an old dog wolf, who had been so often at my door that I knew his appearance, and was perfectly acquainted with his habits…” (Ibid, 171)

Tanner tells of the ever-present wolves, as do many of my hunter heroes, and the impact they had on his life and survival. About fifteen years ago, while reading the early remembrances of settlers in this county, I was surprised to read of the commonality of wolves near the headwaters of the River Raisin up through the 1830s. And, until studying Tanner’s narrative, I had no idea of their threat to a woodsman’s lodge.

Like The Falcon, life must go on for Msko-waagosh. The humble wigwam in the little valley will rise up again, after a careful dissection and an appropriate amount of reflection. The loss of this lodge is, after all, another wilderness classroom lesson. Such is the way of the forest…

One Response to Time to Move On…