“Perhaps is the promise of tomorrow…”

Five blue jays hollered on the ridge. A silent, chipping sparrow bobbed up and down on a dainty sprig. The ruckus intensified. Blue-feathered blurs darted about like bees hovering around fresh-bloomed posies. The calm, late-afternoon air felt damp, and the splintered red oak smelled of wet hound hair. The crotch of the tree’s east main limb offered Mi-ki-naak ample protection for ambushing a wild turkey dinner. 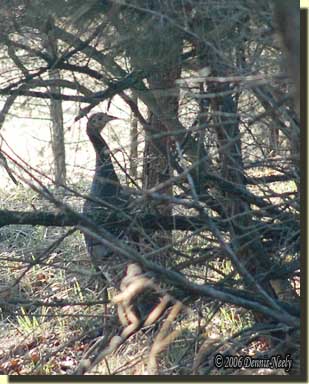 That fall the birds favored roosting in several large oaks up on the ridge to the north, opposite the tamarack swamp. Every few days a small flock of nine bronze beauties pecked their way along the doe trail that bent around the tangle of flattened, curled and broken branches. Deer-hoof prints upon deer-hoof prints churned the earthen pathway; no three-toed, purple-legged tracks showed in the bare sandy soil that Saturday in 1763.

“Arrkkk!” A while later a bird uttered a sharp, solitary cluck to the south, about at the narrows crossing. A red squirrel inched out on the lowest limb of the second red oak to the south. It flexed its tail and squeaked twice, lurched farther out, then began a screechy, scratchy chatter. A second red squirrel answered from a red cedar tree halfway up the hog back’s east slope.

The squirrels bantered on, consuming a passel of minutes. Then leaves rustled, down the hill and to the south. Heartbeats grew stronger, only to ebb to normal when nothing appeared. The noise returned, then stopped. A gray squirrel hiked its way up a tall shag-bark hickory tree.

In a subconscious move, the returned white captive reached to his sash. At the least, he intended to scribble the blue jays antics, the red squirrels chattering and the afternoon’s vexations on a folded page tucked in a split pouch draped over the hand-woven sash. But his fingers failed to retrieve the deerskin pouch, because it simply was never there. Mi-ki-naak shook his head in disgust.

“Kee-honk, kee-honk, yonk, yonk, yonk…” Five geese winged westward. The familiar din faded as the geese flew beyond the River Raisin. An eerie silence fell upon the hillside. The woodsman’s right leg tingled and prickled. He rolled to his left, flexed the numb leg, then changed position on the wool bedroll. The glade slipped into a mediocre state of dismal—not light, not dark, not loud but not silent, either.

Thick, gun-metal gray clouds stalked overhead. A noticeable chill crept down the slope, enveloping the broken-oak palisade. The steady plod of split hooves on crunchy leaves foretold of a does arrival, upwind and to the south. The deer browsed and nibbled every few steps. It stopped beside the fortification, tugged at a twig and pawed in the leaves, all the while unaware death lurked so near.

A supper of dried venison loomed as darkness fell. Roost time came and went as the chill turned to cold night air. But nary once did the seasoned woodsman hear the sound of big wings. Perhaps that chorus of joyous forest noise existed beyond his humble ears. “Perhaps,” he thought as he scrambled to his feet, slung the bedroll over his shoulder and began the walk back to his evening shelter in the dimming light. “Yes, perhaps is the promise of tomorrow…”

Split Pouches to the Fore!

Split pouch questions wove their way in and out of several conversations the last few weeks. I’m amazed how one or two accoutrements keep popping into traditional black powder hunting discussions, often as a passing side note, or as a result of research.

When my 1763 persona, Mi-ki-naak (Snapping Turtle), reached for a split pouch that didn’t exist the modern me realized how far I needed to go with fleshing out this newcomer’s being. The mere act severed the portrayal’s bond with October of 1763. “Breaking the mystic spell of time travel” happens often as a new character develops. I faced the same problems with Msko-waagosh, and there is no quick remedy other than patience and careful research.

My other alter ego carries his journal pages in a buckskin envelope. A journal page consists of one sheet of paper folded in half, then folded again in thirds. This folding method yields twelve palm-sized pages, room for 800-plus words, and the written page is easy to set aside or hide when game comes near.

The practice evolved from the British military’s record keeping system called “returns,” where one page is folded in a specific manner and each resulting page is dedicated to the orders or happenings of the day. At the end of a given period of time, the daily returns were bundled together and sent off to the War Department in England. Mark R. Tully explains this method in more detail in The Packet article titled “Notebooks,” a discussion which is best left for another post (Tully, Packet, 16 -17).

At any rate, a journal is a key necessity for any character portrayal when a writer specializes in outdoor stories set in the 1790s or, as now is the case, 1763. Adding the third persona emphasized the perceived need to have each historical entity different and distinctive from the other two. That in itself has caused some problems, partly because I resist changing when I find or develop a hunting method that produces consistent results.

The trick, it seems, is to select accoutrements that match the research with regard to who, when and where, but don’t affect the stalks and still-hunts in an adverse fashion. Developing three different journals does not appear to be that important, but as I found out on that Saturday in 1763, a time traveler from the future soon discovers what he expects to be isn’t always the case.

The obvious choice is to create a different split pouch for the newest returned white captive in my living history family. Adhering to the physical confines of known artifacts, I would make some changes to a split pouch for Mi-ki-naak, based on Msko-waagosh’s trials and tribulations in the wilderness classroom. But realizing the need to be “different and distinctive,” provides an opportunity to explore other period-correct accoutrements and learn how they perform while traipsing through the forests and fens.

John Tanner’s narrative was a guiding light for the development of Red Fox. James Smith’s journal is serving the same purpose for Snapping Turtle. Early in his captivity, Smith witnessed the aftermath of Braddock’s defeat. A Frenchman gave him a copy of Russel’s Seven Sermons, “which they had brought from the field of battle” (Smith, 26). This becomes part of what he calls “my books.”

“They seated me on a bear skin, and gave me a pipe, tomahawk, and polecat skin pouch, which had been skinned pocket fashion, and contained tobacco, killegenico, or dry sumach leaves, which they mix with their tobacco—also spunk, flint and steel,” Smith wrote when describing his adoption ceremony. (Ibid, 30)

In October of 1755, Smith traveled to Lake Erie:

“On this route we had no horses with us, and when we started from the town, all the pack I carried was a pouch, containing my books, a little dried venison, and my blanket…” (Ibid, 40)

Now this pouch had to be of a modest size, depending upon the size of the copy of Russel’s Seven Sermons, plus he refers to “books,” which included a Bible. In this passage he makes no mention of what the “pouch” was made of or how it was constructed—frustrating, but common. The story of this pouch continues:

“While we remained here, I left my pouch with my books in camp, wrapt up in my blanket, and went out to hunt chestnuts. On my return to camp my books were missing…” (Ibid, 43)

In late March of 1756, Smith and his adoptive family returned to the area where the books were lost. While they dug up a canoe stored for the winter and set about making another to transport their maple sugar, bears oil and skins, “a young Wiandot found my books.” Members of the party gathered together to examine the find:

“They called me by my Indian name, which was Scoouwa, repeatedly…they showed me the books…They then showed how they lay, which was in the best manner to turn off the water. In a deer skin pouch they lay all winter…” (Ibid, 54 – 55)

The result of this reading is that James Smith possessed a “polecat skin pouch” and a “deer skin pouch.” For safety, I have always avoided wearing any animal fur when hunting or when traversing the glade during an open hunting season. Thus, the polecat skin pouch is out, but Smith described the contents of that pouch, eliminating it as a possible repository for journal pages.

The “deer skin pouch” is another matter. It contained “my books,” which could include journal writings. In Msko-waagosh’s era, the 1790s, Charles Johnston became a prisoner of the Shawnees. He noted:

“While the Indians were busy with their cards, I tried to begin a journal of my travels. A copy of the Debates of the Convention of Virginia…had been found in one of the boats taken [by the Indians] on the Ohio…now I determined to write my notes on the margins of its pages. With a scalping knife I made a pen of the quill of a wild turkey. I made ink by mixing water and coal dust, and began my journal…” (Drimmer, 196) 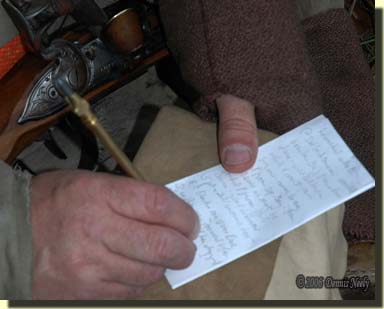 Finding a copy of Russel’s Seven Sermons and trying to scribble notes in the margins might be fine when viewed in the context of a first-person portrayal in a museum setting, but that solution is unworkable for day-to-day hunts. Carrying journal pages in a deerskin pouch, separate from the shot pouch, represents a viable alternative worth further study.

Perhaps the take-away from this research exercise is that an option exists to the use of a split pouch for Mi-ki-naak. Smith’s “deer skin pouch” satisfies the different and distinct criteria, too. “Yes, perhaps is the promise of tomorrow…”