A Calamity or an Opportunity?

Posted on May 4, 2018 by Dennis Neely: Traditional Woodsman

Dry leaves crunched on a sunny April afternoon. “Tat-a-tat-a-tat-a-tat-a-tat…” A downy woodpecker’s rhythmic drumming filled the hardwoods east of the River Raisin’s bottomlands. Elk moccasins slipped over the rise and down into the bowl that sheltered the returned captive’s ruined hunting camp.

A wet, heavy snowfall, followed by a stiff northwest wind collapsed the wigwam mid-winter. The west-side bents and ribs broke first. Two lashed-in replacement ribs failed to stem the inevitable demise of the little domed structure. Canvas lay against canvas. The smoke-hole cover remained tight against the square opening, even in death. 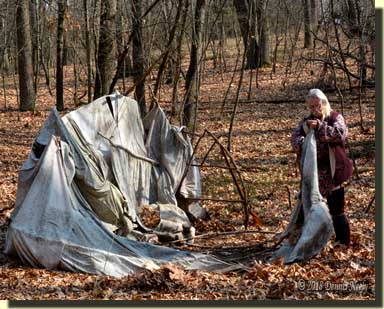 The Northwest gun rested to the right of the entrance while the gray-haired woodsman assessed the damage. Fingers stiffened by rheumatism struggled to undo the wraps that bound the weathered canvas pieces to the broken cherry saplings that once formed the humble abode. A red-tailed hawk circled to the south. “Scu-reeeeee…Scu-reeeeee!” was that bird’s assessment of the woodland misfortune.

Frustration gave way to the butcher knife. Judicious slices and cuts severed the ties on the inside of the ribs. Msko-waagosh draped the first few canvas squares on the tripod that stood over the camp fire circle. A quick flip with a trailing wind spread the fourth cover on the leaves in front of the fleshing beam. One-by-one the tattered squares and rectangles found their way to that pile.

Simple knots tied a braided rope to each end of a straight branch that was sewn in the loose end of the smoke-hole cover. A clove hitch secured the rope’s center to a long pole. That oak pole adjusted the draft and the wispy smoke column that rose from the fire pit inside the wigwam, and when there was no fire, the cover kept the rain and snow out of the shelter. The smoke-hole cover required extra tear-down time, and once freed, Msko-waagosh set the smaller rectangle to one side.

An empty, oak-leaf and grape vine mouse nest fell from a jumble of fabric. Fortunately, no one was at home—an odd parallel to the demise of the wigwam. Now and again, a leather-clad toe bumped one of the apple-sized stones that circled the inner fire pit. Jagged sapling ends jabbed at wool leggins. At shoulder level, three spear-like remnants of ribs pierced holes in the worn cloth during the collapse. Two in particular threatened like rattlesnakes coiled and ready to strike.

An angry flock of crows cawed to the south about the time the final canvas square flipped in the warm afternoon breeze and settled on the pile. The smoke-hole cover with the branch still sewn in the hem topped the covering as Msko-waagosh dropped to his knees and began rolling the piled canvas. The braided rope wrapped about the improvised roll. The ends of his leather portage collar circled, then bound the canvas for the long journey back to the homestead…

At a Fork in the Trail 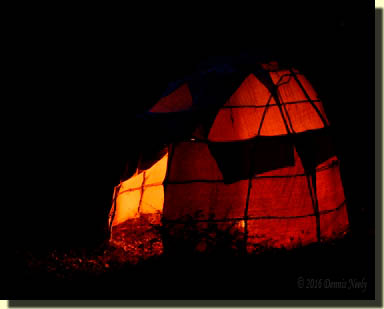 Each slice and cut of the butcher knife brought back memories of that tiny wigwam. On the one hand, I still believe those saplings should have lasted a couple of years longer, but for some reason they didn’t. On the other hand, this minor setback fits into the current state of my writing and of my living history pursuits: I find myself at a fork in the trail.

Taking a step back and a moment to ponder, the trading post hunter’s brush shelter, the one described by Meshach Browning, is gone, as is his duck camp and the canoe-tarp lean-to. The hollow oak that stood over so many “night-fall camps” fell fifteen or so years ago.

In the case of Msko-waagosh, his wigwam is no more. And poor Mi-ki-naak has yet to establish a “semi-permanent dwelling.” Hmmmm…all three personas are homeless—is this circumstance a calamity or an opportunity?

I sometimes engage in time traveling with Lt. Lang, a British ranger serving with Captain Joseph Hopkins’ Independent Company of Rangers out of Fort Detroit in the fall of 1763. Msko-waagosh is a first-person characterization who exists in the mid-1790s, almost a generation removed from the savvy ranger. That disparity in eras has always bothered me.

You see, dear reader, I look forward to sitting against a big red oak and discussing “recent events” with Lt. Lang, traditional woodsman to traditional woodsman. But it is impossible for a conscientious living historian to find total immersion in a moment that exists only across time’s threshold—enter Mi-ki-naak.

The creation of Mi-ki-naak, who is also a returned captive who grew up with his adoptive Ojibwe family, was supposed to be a simple, and I emphasize simple, accommodation for the disparity in time periods. In reality, just the opposite is the case. Researching the 1763 time period is a total restart. In contrast, the birth of Msko-waagosh was an extension of my 1790s documentation—different life stations, but the same geographical region and chosen era. I did not foresee that issue, so again, calamity or opportunity?

Further, to avoid confusion with readers, I decided early on that my two returned captive buddies needed to be two distinct and different people. As I’ve emphasized to Lt. Lang on a couple of occasions, I want the outward appearance of these two woodland wanderers to be different, to the point that anyone looking at the photos of a given adventure can immediately determine which returned captive they will be reading about.

And hidden therein is a tremendous opportunity! Choices always accompany the creation of any traditional black powder hunting persona, whether they deal with the clothing, accoutrements, arms, shelters, or other aspects of material culture.

For example, an individual decides on the style, color, weave, etc. for the trade shirt his or her alter ego will wear, based on primary documentation that supports that characterization. Over time that persona might acquire one or two other shirts, but one seems to define the portrayal best.

These multiple possibilities exist for each item a given character owns, and thus the combinations are endless. From the traditional hunter’s standpoint, a new persona represents a chance to try other artifacts passed over with the first characterization. “Try” is the operative word, because the wilderness classroom tests these choices, and sometimes proves them unworthy for backcountry survival.

At first, the birth of Mi-ki-naak was as difficult, if not more so, than Msko-waagosh. The two shared common clothes, but that mistake, if I should call it a mistake, brought to light the imperative need for distinction, differentiation and clear definition. The trading post hunter (does he need a name?) and Msko-waagosh will undergo some tweaking, with a couple of shared artifacts being appropriated by one or the other of these woodsmen. And Mi-ki-naak will become his own man, too.

The research is taking more time than expected, because all three personas are coming into question, which is all part of persona development for traditional black powder hunters. And as far as semi-permanent shelters go, each will have his own humble abode in the North-Forty—that research is already completed.

So, in the final evaluation, was the demise of Msko-waagosh’s wigwam a calamity or an opportunity? By all accounts a new opportunity…