Oh, if it was only that easy!

Posted on May 19, 2018 by Dennis Neely: Traditional Woodsman

Sun rays illuminated a rising mosquito. Grayish tan wings, longer than its body, blurred. Blood sucking mixed with a striking, natural beauty, this tiny creature of misery flitted up-and-down, back-and-forth with enchanting grace. Another drifted about, coming and going along a blue wool leggin. Still another buzzed and hovered near the woodsman’s left ear.

Two needle-beaked wonders tried to alight on bare skin, but instead flew down to a wet cowhide moccasin. The torturous onslaught demanded a swat, yet the thought of a wild turkey gobbler glimpsing such quick motion quelled that idea. Brisk puffs of breath from pursed lips shooed the beasties back. Some moved on, while others persisted. Ah, the torment of the forest…

Spider webs shimmered on that calm May morning in the Year of our Lord, 1796. Silvery dew drops shimmered as the rising sun’s spears pierced the cedar trees and hardwoods. Shadows skulked hinter and yon. 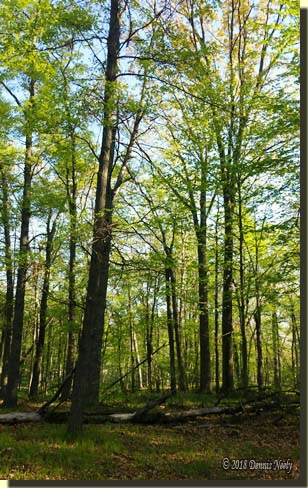 A king bird warbled. A downy woodpecker rat-a-tat-a-tatted. Two wood ducks flew over, banked in unison, then veered to the west and the sanctity of the River Raisin. A mosquito landed on the returned captive’s chin. A twitch and two puffs dislodge it and drove it away. A single goose ke-honked. A bullfrog croaked, deep and loud. The king bird sang and sang.

A small white spider’s nimble legs crept over a band turned on the Northwest gun’s browned barrel. From whence it came Msko-waagosh, the Red Fox, did not know. Several geese disagreed near the lily-pad flats of the Raisin. The white spider marched along the ridge where the forestock touched the round barrel.

A lone white-tailed deer walked through a green patch of skunk cabbage, its fore legs black with wet muck to the knees, the back legs muddy halfway to the hock. A fox squirrel barked in a scolding tone. Two deer ears popped up at the juncture of a greening opening and last summer’s tawny, dry bent-over cattails. Both deer meandered toward the same secluded point of land in the river bottom.

The fox squirrel settled into a slow, contented chatter as it perched on a crooked maple limb that arched out over the clearing. Buds lined that tree’s twigs and branches, late by two weeks due to a cold April.

The woodsman held his right hand to his mouth, then clucked twice, “Ark, ark…” No answer. Minutes later a mosquito landed on the back of a finger, set back on his wispy legs and prepared to drill. A slow, sideways slide of that same right hand crushed that wanton attack.

Three geese flew low over the huckleberry swamp. The middle bird dropped its black head, eyed right to left, then returned its attention to the business of keeping up with the other two. The steady wing beats uttered hushed, rhythmic swishes, but like the turkeys the geese remained silent…

Another Step Back in Time…

Narrative passages sometimes bounce about the mind’s inner sanctum long after conscious reading. Before this year’s gobbler season began, I worked on what started out as a simple blog post dealing with wing bone turkey calls. The writing took on a life of its own; a handful of paragraphs grew into four separate documents, which unfortunately are still awaiting completion.

A part of the background documentation led me to the eloquent words of Joseph Doddridge. I believe all living historians have “pet passages” that strike their fancy. Such missives recur time and again within the context of a character portrayal, either as a spoken statement of first-person reality or as a guiding light for 18th-century actions. As a traditional black powder hunter, Doddridge’s “…imitating the noise of every bird and beast…” is such a passage:

“One important pastime of our boys was that of imitating the noise of every bird and beast in the woods. This faculty was not merely a pastime, but a very necessary part of education, on account of its utility in certain circumstances. The imitation of the gobbling and other sounds of wild turkeys often brought those keen eyed and ever watchful tenants of the forest within the reach of the rifle. The bleating of the fawn brought her dam to her death in the same way…” (Doddridge, 122)

One of my personas, the hired hunter for a backcountry trading post, hasn’t seen much field time in the past couple of years. That said, he, too, relies on Doddridge’s educational tutelage, along with several passages from Meshach Browning’s narrative, Forty-Four Years of the Life of a Hunter. At one point Browning sums up the essence of spring gobbler hunting in one sentence. Oh, if it was only this easy:

“…I walked fast, and presently heard a turkey gobbler, when I imitated the cackle of a hen turkey, and as he came running to find her, I shot him.” (Browning, 229) 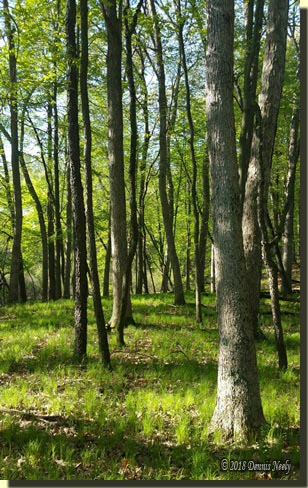 On that calm May morning in 1796, Msko-waagosh, the returned captive persona, took a conscious moccasin step in the direction of a more meaningful portrayal: he left his single wing bone call in his shot pouch and used his mouth to imitate the soft, seductive cackle of a hen turkey beckoning a spring lover.

For the life of me, I don’t know why I haven’t tried this before. Nothing is ever lost with any lesson in the wilderness classroom.  Even failure is gain. As Doddridge says, imitating the noise of every bird and beast was a pastime. Why not learn as they did?

A mix of cultures exists in this action, in that the documentation for using the wing bone possesses Native American origins. That said there is ample implied evidence to support an individual who was raised by an adoptive Ojibwe family using his mouth to imitate the noise of a wild turkey.

C. B. Allman’s narrative, The Life and Times of Lewis Wetzel, relates the dark tale of the “Gobbler Indian.” Lewis Wetzel describes his preparations for this January, 12, 1783 “hunt.” In the build up to the finale, he states:

“…In a little while my call was answered and presently a large Indian came in sight and was leaning down and going to and fro, as if hunting a trail. I kept calling; he answered and came on towards me…” (Allman, 124)

And reading on in Doddridge, he makes similar comments when he writes:

“…The Indians, when scattered about in a neighborhood, often collected together by imitating turkeys by day and wolves or owls by night…” (Doddridge, 123)

Over the past decade the habits of the turkeys on the North-Forty have changed. The explanation for these changes is complicated and not needed for this post. Two-year-old gobblers are both call and decoy shy. The rampant coyote population has caused the birds to go silent on the ground, save for soft clicks, clucks and putts when the birds get close to each other.

Strings of yelps like those presented on modern call makers’ videos serve only to alert our turkeys to the grim reaper’s location. About eight years ago, a hunter on the adjacent property to the south unleashed a series of clucks, putts and purrs. A fallen maple’s root ball, in the River Raisin’s thick bottom land a couple hundred yards downstream, sheltered the post hunter’s deathly shape that morning.

Not five minutes after the first utterances, this woodsman’s eyes caught movement. A hen with her head down skulked through the skunk cabbage. Another followed, and then came a jake, all moving away from the caller. The lesson of that 18th-century morning confirmed what my alter ego suspected.

The toms are still hanging with the hens, just as the spring leafing of the trees is two weeks behind. When a woodland survival tactic does not produce a meal, a quick change is in order. The wing bone call is not working, so there is little lost attempting to imitate the noise of this elusive game bird. Perhaps Msko-waagosh will stumble upon the same enchanting tones used by Meshach Browning, and a turkey gobbler will come running to find the mysterious hen. Oh, if it was only that easy!