“Looks like someone is collecting leaves,” Bob Rubbo said as he picked up the walnut-sized chunk of limestone that anchored the green maple leaves to the loading bench. The top two leaves tumbled along the weathered plank, pushed by a stiff June breeze.

“Careful, that’s my wadding,” Msko-waagosh said with a big grin.

“No, that’s what I’ll load the round ball with,” the returned white captive said as he placed the rock back on the little pile.

“You pick those here?”

“Over there,” Red Fox answered, nodding toward the young maple tree to the north of the loading bench. “I took them from that branch that’s broken off and lying next to the trunk. No trees were harmed in the collection of this wadding. The damage was already done.”

“And you use them for wadding?”

“I have for a number of years. I see you’re shooting a club butt fowler, do you need wadding?”

“No, I use a patch in my smoothbore, like everyone else here. Let me know when you load up, because I want to see this,” the gun maker replied as he walked to the next bench to the east.

Early in the afternoon on the first Sunday at the National Muzzle Loading Rifle Association’s Spring National Shoot, held at the association’s home grounds in Friendship, Indiana, gun makers gather at the chuck gun range on the main shooting line. The Gunmaker’s Match is held twice a year, at the spring gathering and at the Fall National Championship Shoot at the Walter Cline Range.

The premise of the match is simple: take one shot at a mystery target placed at an undisclosed distance from the shooting line with a muzzleloader of your own manufacture. The entry fee is three dollars. If a competitor misses the target, he or she coughs up another dollar and accepts a stiff helping of good-natured ribbing. This a fund-raising event for Gunmaker’s Hall, a small log cabin behind the clubhouse on the main grounds where the finest muzzleloading rifles, shotguns and pistols are on display.

The winner of the previous year’s match supplies the official target and a miniature duplicate, which is of little consequence to individuals capable of handcrafting a fine longrifle. After the event, everyone who participates signs the target next to their bullet hole, if they hit the target, or on the back, if they didn’t. The winner receives the miniature as a trophy for his or her mantel, along with the responsibility for the next year’s target.

The wooden targets can be any size, shape or style. Most are round, vary in size from twelve to twenty inches in diameter and feature a traditional image of the maker’s choosing: old Currier and Ives prints, tole-painted images, photographs, or other forms of art work. In the early years, the targets sported a painted border, lettered in German: “Buchsenmacher Schuetzenfest,” or “Gunmaker’s Shooting Festival.”

The One Shot Wonder 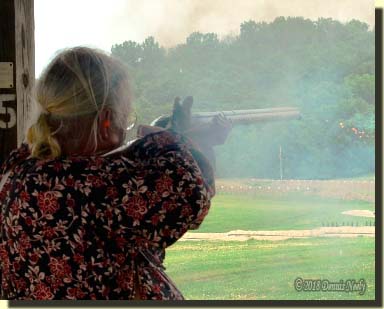 Family health issues necessitated staying close to home in 2017; missing Friendship was a huge disappointment, but such is life. Both Tami and I viewed attendance at the Spring National Shoot as “a step back to normal.” I wore my “writer’s hat” the first couple of days, but on Sunday afternoon with great glee, I switched to my “shooting cap,” or scarf as the case may be.

The late Roger Rickabaugh introduced me to the Gunmaker’s Match on my first trip to Friendship in September of 1985. The late Ron Ehlert, the “Zip Meister,” handled the event at that time. Ron kept everyone laughing and showed reverence for no one. The late Bob Harn scored those early matches.

A noted gun builder would take a shot with an exquisite longrifle. As the smoke dissipated, Ron peered in his spotting scope. A grid covers the target as a reference for keeping direct hits straight. He would look and look, then exclaim “I see it!” The shooter would smile as Ron called out the coordinates for the supposed hole. “Upper left square…one, two, three…three squares to the left.” The scorer would move his pen or pencil to that square and await Ron’s vertical measurement. The crowd hushed.

Ron would return to the scope, and sometimes he would rub his chin or tug at his ear. He might take a second or even a third look. That made the shooter nervous as that first smile wilted into intense concentration. “Up…one, two, three…twenty two!” Well, “twenty-two” squares up would place the shot a good foot or more above the target proper. Ron would whirl around and go into a crouch like a baseball umpire. He’d stretch out his hands as if to signal the runner safe, then hiss a triumphant “Zzzzziiiipp!”

When the shooting relay ended and the line closed, several builders help set the target out at about 50 yards. I couldn’t believe the distance. Over the years, I’ve hit the target a few times with “Old Turkey Feathers.” That’s a victory in itself, considering the smoothbore’s limitations and the fact that the target is most often placed out beyond the 100-yard target stands. I had to usher doubts from my mind. “You’ve got this,” I assured myself. Tami looked excited, too.

The time came to load. I had a small crowd watching—both gun builders and spectators—as I rolled two maple leaves into a ball and seated the natural wad on the powder. The bare round lead ball rattled down the fouled bore. A single rolled leaf, rammed tight, held the ball in place. Heads shook and eyebrows scowled as I loaded. “I’ve never seen that,” one spectator said.

Scott Ballentine (lt.) and Bob Rubbo (rt.) compare the hits noted on the score sheet to the actual target.

At any rate, I stepped to the line when my name was called, primed and took aim. The trade gun thundered, and I heard the lead sphere hit. I thought I saw the hole at 11 o’clock. The bullseye is never in the center, but rather to one side of the target, again by the maker’s choice. In preparation for the match, the target is rotated so the “top” is not up, or like this year, the target is left upright. The grid paper is added. Winning is by pure luck. For me, the goal is to hit the target, but not win; I don’t have the time to make two custom wood targets, but I would if I had to. Signing the target is the big thrill.

After a late lunch, I again donned my “writer’s hat” and went back to work gathering stories for future articles. Monday’s schedule was filled with the last of the work assignments. I thought I might shoot a couple rounds at Shaw’s Quail Walk Tuesday morning, then venture up to the primitive range in the afternoon. I wanted Mi-ki-naak, Snapping Turtle, to experience defending the blockhouse during the Fort Greeneville Match on Tuesday evening.

But as my late wife, Mary, used to say: “If you want to give God a good laugh, tell him what your plans for the future are.” Monday evening I tore the cartilage in my knee, and that was the end of Friendship. And I won’t accept “old age” as an excuse…

A few days ago, I was talking with another traditional black powder hunter and the subject of shooting at Friendship came up. I related my tale of woe, but noted that I fired one shot and hit what I aimed at. “A one shot wonder,” said I with a laugh. The kidding and banter started, and in the midst of that I noted the silver lining to the whole affair:

Post Script: I’m fine. “Thank you” for your prayers and concern. Surgery went well, and I’m hoping to get into the woods this weekend or early next week—Denny