“they purchased me a new gun…”

Fog shrouded a crimson cardinal’s “whit, whit, tsu, tsu, tsu, tsu.” Now and again a brown oak leaf drifted through the mist. The oaks still held a fair number of their leaves. Crows initiated their first melee of the day. The air smelled fresh and spring-like with an acidic twinge of drying leaves—unseasonable, but welcomed, for this late in November. 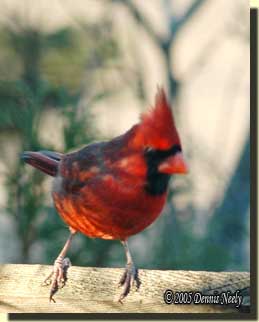 Two blue jays passed by, calm and quiet. A chipping sparrow searched milkweed heads at the edge of the sedge grass. A doe huffed once, off on the west corner of the north island. Two deer entered the swamp and lingered in the poplar trees, unconcerned. The French fusil fidgeted, waiting for the first sounds of a wild turkey flying down, perhaps an “ark, ark,” or sight of a bronze body herky-jerking on the mucky trail?

Uphill from the hidden path, a mighty oak toppled two summers prior. The smoothbore’s muzzle, pointed skyward in line with where the south-angling trail emerged from the sedge grass, rested on one of the downed oak tree’s upper branches. Withered, gray leaves clung to drooping twigs in the tree’s once majestic crown. Tangled branches—twisted, broken or contorted in grotesque fashion—formed the perfect ambuscade. The earthen byway continued up the rise and into the forest proper, passing but fifteen paces south of the woodsman’s fort.

Mi-ki-naak discovered the tantalizing mix of whitetail and wild turkey tracks that adorned the mucky path while still-hunting to the tiny waterfall that gurgled down the hillside a ways around the bend. “Snapping Turtle,” the returned white captive who spent his youth among the Ojibwe, favored a wild turkey dinner. On that pleasant morn, he waited with the French fusil purchased for him on a trading trip to the area near Fort Ponchartrain du Detroit.

The deer in the poplar stand wandered south, following the course of the tiny stream that flowed north from the watering hole. When the futility of the moment became evident, Mi-ki-naak scrambled to his feet, slung his bedroll over his shoulder and began to still-hunt into the hardwoods.

A ways uphill, the seasoned woodsman discovered two deer legs standing amongst a clump of red cedar trees. He eased against a red oak’s coarse bark and watched. A doe appeared. She twitched her ears, sniffed the air, then turned and walked south. Mi-ki-naak stalked those cedar trees, found her bed and sat beside it. The vantage point offered a reasonable view under the brush and trees to the crest of the next knob. He clucked twice, then waited.

Deer legs mingled to the east; a clump of short cedar trees obscured their bodies. They also moved south, along with a young buck with a broken left antler beam. The woodsman clucked once in hopes of pulling a wild turkey from the nearby clearing. But that did not happen. An hour later he once again got to his feet, picked up his bedroll and still-hunted to the south with the French fusil de chasse cradled in his left elbow…

Deciding on a Trade Gun

Whenever possible, the narrative of John Tanner guides the exploits of Msko-waagosh, Red Fox. With the creation of a new persona, that of Mi-ki-naak, Snapping Turtle, set in the fall of 1763, the recollections of James Smith offers guidance. As any historical portrayal unfolds, supporting primary documentation comes together from a number of sources, and over time, multiple discoveries either add credence to the validity of choices made or relegate them to the scrap heap.

Mi-ki-naak is a real challenge. Although this persona parallels the 1790s version of a returned Native captive, the historical surroundings are different. Many aspects of this fictitious individual’s life are a mystery, and will remain so for some time. Even the question of when is this person writing—as the event happens, or recalling the particulars in later years—is still unknown. And of course, a key selection is a proper flintlock for this woodland wanderer. Such is the joyous misery of traditional black powder hunting and living history…

From the outset, the standard Northwest gun was not an option. Oddly enough, researching for Mi-ki-naak brought to light a huge discrepancy in my portrayal of the other two personas: they used the same smooth-bored trade gun, “Old Turkey Feathers.” That doesn’t negate the Northwest gun choice, only that those two forest tenants should not be “sharing a gun.” But despite all the years of writing about their backcountry adventures, no one has ever brought up that point. I find that interesting.

A part of me wanted a different arm, perhaps an earlier version of the Northwest gun, like one made by John Bumford or a trade gun following the pattern T. M. Hamilton described as a “Type G” in his book, Colonial Frontier Guns (Hamilton, 45 & 68). The thought of either smoothbore style complimented my concentration on the Northwest pattern, plus that option dovetailed with my existing research on the subject.

I sought opinions from a number of traditional black powder hunters, gun builders and living historians. Their suggestions broadened the spectrum to include English and French fowlers, “Type C or D” trade guns and even the earlier club butt fowlers. Such input might appear to muddy the waters, but in reality these ideas started me thinking more in lines of the general “world view” of the circumstances that surrounded the Snapping Turtle character.

Early on, Lt. Lang suggested starting my research with the narrative surrounding the siege of Fort Detroit, edited by Milo Milton Quaife. As an added bonus, this work also includes John Rutherfurd’s Narrative of a Captivity. I purchased an older copy of the book and started studying, marking passages in my usual, book-value-destroying manner. How could this project go wrong?

The first sentence of the journal, dated May 7, 1763, declares that Pontiac is the chief of the Ottawa, Chippewa and Potawatomi peoples. Mi-ki-naak lived with an adoptive Ojibwe (Chippewa) family. A handful of pages later it becomes clear that Pontiac and the tribes of the three fires consider the French as their brothers and that they have been mistreated by the English. That perspective doesn’t bode well for a hunting companion that is a member of Captain Joseph Hopkins’ Independent Company of Rangers, garrisoned at the British Fort Detroit. On the other hand, Mi-ki-naak is white, a British subject before his capture, just as James Smith was. “This will work out,” I muttered as I read. 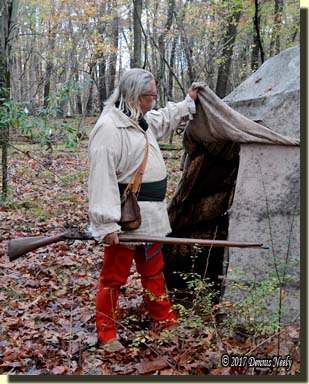 But the allegiance to the French continued to bother me, especially with Lt. Lang and I hunting together in the 1763 wilderness west of Fort Detroit. Are we friends or enemies, or perhaps something in between? At the least, we will be sharing the forest on the same day, in the same year. The historical simulation will seek its course from there.

With respect to what smoothbore to choose for Mi-ki-naak, the French influence became a concern when I considered “English” fowlers or early trade guns. I found myself returning to the vehement loyalty to the French Pontiac and his people showed. I did what I always do in such situations; I went back to my primary documentation sources…

James Smith was captured in 1755 at the age of eighteen. By the winter of 1756, Smith was tending his own trap line when a fresh beaver pond kept him from returning to the hunting camp.

“…I had neglected to take fire-works [fire starting kit] with me, and the weather was very cold…,” (Smith, 81).

Without the means to strike a fire, Smith recollected that he exercised all night to keep warm:

“I danced and hallo’d the whole night with all my might, and the next day came to camp…” (Ibid, 82)

When he returned to camp the next morning, he told of the night’s harrowing passage, then continued:

“They said that old hunters were frequently involved in this place, as the beaver dams were one above another on every creek and run, so that it is hard to find a fording place. They applauded me for my fortitude, and said, as they had now plenty of beaver-skins, they would purchase me a new gun at Detroit, as we were to go there the next spring…” (Ibid)

Smith noted that his hunting efforts were “…reduced to the bow and arrow…” A trade gun in any usable condition offered new opportunities. Thus, the saga of his new gun continued after breaking sugar camp in the spring of 1756:

“…and arrived safe at the Wiandot town, nearly opposite to Fort Detroit, on the north side of the river. Here we found a number of French traders, every one willing to deal with us for our beaver. We bought ourselves fine clothes, ammunition, paint, tobacco &c. and, according to promise, they purchased me a new gun; yet we had parted with only about one third of our beaver…” (Ibid, 89)

Following in James Smith’s moccasin steps, Mi-ki-naak needed a smoothbore purchased from a French trader in or about the vicinity of Fort Ponchartrain de Detroit in 1756. After more consultations and research, the possible choices narrowed. Although Smith never gives a hint as to the type of gun purchased, I doubt the finer guns, the fusil fin, Type C or D fusils, were an option because they traded for more beaver. He was, after all, a mere captive. That narrowed the field to two French trade guns: the simple fusil de traite or the fusil de chasse.

My first choice was the fusil de traite. I liked the elegance of plain, no-frills design, especially the butt stock’s straight lines. But the cost, both in time and money to make a custom reproduction of the fusil de traite are prohibitive right now. I can’t get the clothing sewn that Snapping Turtle needs, let alone devote additional time to crafting a smoothbore. i was left with but one option.

Years ago, I bought the fusil de chasse sight unseen. The seller said, “It’s not a pretty gun, but it shoots straight.” I wanted a loaner gun and the price was less than parts and pieces. His description is accurate, which suits Mi-ki-naak, too. The choice, at least for now, was simple: keep use the fusil de chasse you have.

That decision leads to another important point for traditional black powder hunters: determine what is period-correct from the documentation, then use what is available and within your budget. One doesn’t need to mortgage the house to buy his or her way into a museum-quality, traditional hunting portrayal. Careful research and attention to authentic detail outweigh a fist full of cash, and the enjoyment is the same or better when “making due with what you have.” But that’s a discussion best left for another day…

2 Responses to “they purchased me a new gun…”