Spent on a Worthy Cause

Corn rows paralleled the tiny swale hole. Three tall cottonwoods stood guard over the southwest corner. To the east, a broad weeping willow stood amidst the sedge grass. Two white ash trees, both forked, guarded the northeast edge. Red willows and a few poison sumacs grew here and there among the acre or so of yellowed swamp grasses. Off-center to the west, a patch of cracked black mud glowed prominent like a good friar’s bald head.

Long, brittle corn leaves tugged at linen and leather. Elk moccasins sunk a bit in the dry earth. Muzzle up and out, the trading post hunter’s Northwest gun broke through the loose tangle of flat leaves and bent-over stalks. A bright sun, propped upon the western tree line, signaled the impending end of that late-October day in 1794. In time, the woodsman’s course veered to the east. Moccasins stepped between corn rows. Eyes glanced south, then north; pushed-apart stalks crackled and popped.

Sedge grass tore when stressed by leather-clad legs. The purposeful quest turned into a zigging and zagging back and forth, followed by a sudden halt, an about face, a move to the left then a return to the southward direction of the evening’s quest. This erratic dance befuddled hidden fowl, leaving them no choice but to take flight.

During a pause beneath the weeping willow, frantic brown wings and drab feathers took to the air. The hen pheasant flailed hard. Small feathers floated in the cool night air. Flying straight away, the bird crested the south hill with wings set and coasted on to points unknown near the nameless creek.

On a whim, the woodsman’s course crossed the cracked mud and moved to the west side of the swale hole. The zig-zagging angled towards the three cottonwoods. Stunted, knee-high corn stalks marked the outer reaches of the massive trees’ root systems; the swamp grasses seemed shorter there, too.

Tired moccasins exited the swale hole, then stopped two rows into the corn. Orange, yellow and lavender spears dimmed on the western horizon. A cold chill settled upon the sequestered depression. As an afterthought, the woodsman plunged back into the swale, keeping to the thigh-deep grass under the cottonwoods’ massive upper branches. Three paces from the end of the last-chance appeal, color exploded from beside a short red willow. 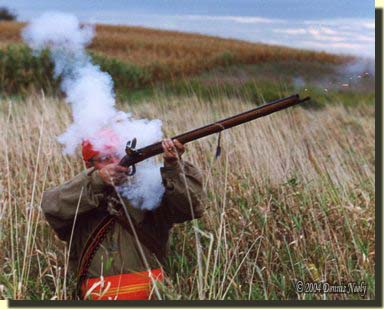 “Kort! Okk okk okk okk,” a rooster pheasant cackled as its escape arched straight up, then curved to the southeast. The green, iridescent head, the red wattle, the broad white ring about its neck left little doubt as to the fowl’s gender.

The sharp English flint clicked to attention as the tarnished brass butt plate moved up in search of its rightful place against the post hunter’s linen-covered shoulder. The turtle sight swung to the right, caught the bird’s long barred tail, then flowed through its body. The first cottonwood shielded the bird. The muzzle passed through the pheasant’s beak; the flint crashed against the frizzen. Sparks showered…

A Quotation Worth Heeding…

Not long ago, a discussion about ring-necked pheasants took an interesting turn. Our pheasant population along the River Raisin has declined over the last ten years to the point there are only a handful of birds left—not enough to hunt. I saw a rooster in the spring, and that is the only pheasant I’ve seen this year.

I grew up on small game hunting. I hunted rabbits and squirrels alone, and I tagged along with Mr. Myers for pheasants whenever I could. He favored English Setters, spent his summers training his dogs and devoted the better part of his two-week vacation to hunting birds. Pheasants were plentiful in the 1960s, and rare was the night we didn’t put up at least a half-dozen birds.

Ace was Mr. Myers’ go-to pointer. He was an enthusiastic hunter, but when he got on scent he would freeze so quick he would almost tumble over. Ha! The memories flood back!

One night Ace went on point. Mr. Myers smiled, handed me his shotgun and then picked up the dog’s hind quarters. First he moved his hind end about ninety-degrees to the left and set him back down. Mr. Myers looked at me and grinned. Boy, he was proud of that dog. Then he picked him up, and moved him to the right the same amount. Ace never budged. His nose held tight on that bird.

Mr. Myers took his shotgun back and nodded at me. My job was to stand in front of Mr. Myers. He was a big, tall man, linebacker-sized. I was short. He could aim and swing over top of me with no problem. I was never in danger—and neither was he, for that matter, which in hindsight I think was the reasoning behind this practice.

When we were set, Mr. Myers would speak to Ace, and if the bird was close, he would whisper to me to “nudge him on.” I’d gently push against his rump with my knee. Ace always advanced a step at a time. Oh, would my heart pound! “Pheasant fever?” If a rooster flushed, as it did that night, Mr. Myers waited until I took one shot, then he would shoot.

In the first year or so, he would hit about three in five. Then his son, Roger, acquired an old English double-barrel with a shorter set of barrels, custom made for upland game. The standard production double-barrel back then had modified and full chokes. If I recall, Roger’s double was skeet-I and skeet-II. Mr. Myers used that gun whenever Roger had football practice, and rarely missed. Even with his consistency, I was always thrilled when Ace brought back the limp rooster.

Anyway, out of nowhere my friend asked if I ever hunted pheasants with the trade gun. When I answered, “Sure!” he expressed surprise that someone could take a flying bird with a flintlock. I understand where this thinking comes from; I hear it more than I think I should. And one must realize such comments are not malicious in any way.

Now this friend knew I hunted deer and thought I hunted turkey, but in his mind I would be shooting at a standing critter. Such situations are opportunities to expound the virtues of traditional black powder hunting for all game species. As I always respond, “Any wild game you hunt with a modern arm can be taken with a muzzleloader.”

I reflected on that conversation the other day as I filed an article I wrote about Ed Dennis in the September, 2018, issue of Woods-N-Water News. The article dealt with Ed receiving the “Offhand Rifle Distinguished Master Award” for the high quality of his marksmanship over the years. This designation was a tremendous honor for Ed.

The award is given to individuals who post ten aggregates (four or more matches in the aggregate) with a combined score over 180 (out of a possible 200) during national championship competition at the National Muzzle Loading Rifle Association. At the time of Ed’s award, he was one of 13 shooters to accomplish this level of scoring in 82 years.

Ed Dennis is a quiet and unassuming person who approaches his shooting in a methodical manner. Near the end of our interview, I asked Ed how he felt about the award. In his typical manner, he avoided the question. “Over my bench,” he said after a long pause, “I have a quote from Theodore Roosevelt, ‘The Man in the Arena,’ Are you familiar with it?”

“It is not the critic who counts; not the man who points out how the strong man stumbles, or where the doer of deeds could have done them better,” he recited from memory. “The credit belongs to the man who is actually in the arena, whose face is marred by dust and sweat and blood; who strives valiantly; who errs, who comes short again and again, because there is no effort without error and shortcoming; but who does actually  strive to do the deeds; who knows great enthusiasms, the great devotions; who spends himself in a worthy cause; who at the best knows in the end the triumph of high achievement, and who at the worst, if he fails, at least fails while daring greatly, so that his place shall never be with those cold and timid souls who neither know victory nor defeat.”

He continued in a modest, humble voice: “I am not a gifted shooter, I just work at it.” When I reread his words, I realized I, too, have been working at traditional hunting for a long time. I’ll certainly never approach the marksmanship ability of Ed Dennis, but that said, I keep plodding along on my journey to yesteryear. I hope with as much enthusiasm as when I began four decades ago.

I did, after all, follow the advice I now give. When I built “Old Turkey Feathers” I substituted that smoothbore for the Lefever Nitro Special double-barrel I grew up with. One of my first hunts with the Northwest trade gun was a pheasant hunt. I missed, of course, but nonetheless I entered the arena as Teddy Roosevelt said. And over time, I’ve hunted and taken a lot of game with that flintlock, much to the surprise of a number of people. I know no other course.

This brings me to another recent conversation that delved into the current trend whereby some living historians are elevated to “expert” status based on what they say and not on what they do, or are capable of doing.

In the last two years especially, I have read “sound advice,” “take it to the bank” gibberish, backed up by other “experts” who can’t find one stick-tight on their wool leggins to prove they were ever in the glade. It seems that among some living historians, gaining respect is more about who you chum around with, which events you attend or on what social media platform one posts than how accurate your data is.

What befuddles me is the advice some of these experts offer does not jive with my forty-plus years of 18th-century portrayals—not even close. Granted, their location and a specific incident might support their statement—based on one instance. Further, why is no one questioning when a comment flies in the face of accepted historical documentation?

During that discourse a number of examples spewed forth from both of us, more from frustration than anger or envy. The concern that I have is that these experts are misdirecting those new to living history, and traditional black powder hunting in particular. Basing a portrayal on authenticated, first-person, primary documentation is a monumental task in and of itself.

In addition, one of the goals of traditional woodsmen is to emulate what our forefathers did, and do so in a manner the results in knowledge and understanding that can be duplicated over and over again in the field. Trying to shoe-horn a half-truth, or worse, a mistaken piece of advice, into a historical simulation cheats the individual of the profound benefits this hobby offers. 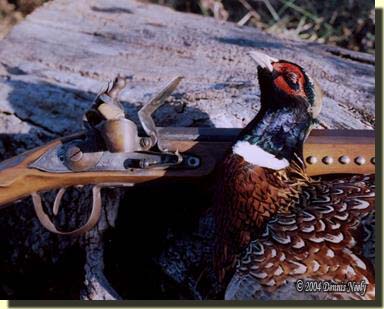 With the fowl at the post hunter’s feet, he offered a prayer for a blessing received, despite not having uttered the usual prayer before the bird flushed. Standing in the solitude of an 18th-century October evening, the woodsman dumped a charger of black powder down the warm barrel of his smooth-bored trade gun. The hickory ramrod eased a half-green corn leaf, wadded in a sphere the size of his usual round ball, down the bore. Death bees rattled. The ramrod tamped a smaller corn-leaf wad tight. Bone tired, his energy spent on the pursuit of a worthy cause, the trading post hunter’s course turned south, bird in hand…

2 Responses to Spent on a Worthy Cause