Thank you for asking, and yes, we are fine, and attempting to get “caught up.”

For the second straight year, life has thrown us some pretty sharp curves. I never could hit a curve ball. Trying to keep a half-dozen or so eggs in the air all at the same time is difficult at best, then someone decides to add an egg or two and…well, that leads to an inevitable messy clean up. And I can’t juggle, either. This year, the blog seems to be the egg most often missed—or dropped. I apologize for not keeping up, but I had little choice in the matter.

Sometimes in this hobby, progress plods along slower than we would like. But the goal of every traditional black powder hunter is a quality portrayal, not quantity, or at least it should be. Despite setbacks, Mi-ki-naak, the new persona from the fall of 1763, now possesses enough of the basics for 18th-century daily life to step back in time with reasonable meaning and authenticity. 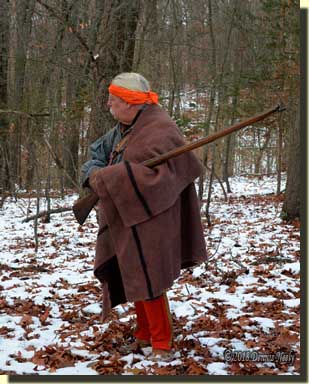 Swamp muck dapples his red wool leggins, the silk ribbons of his breechclout show a few briar snags, his hand-woven sash (new this fall) has stretched a bit, a greenish-gray linen shirt covers a white, ruffled trade shirt, he possesses his own shot pouch and large powder horn with a crude snapping turtle engraved. I’ve already discovered one or two oversights missing from this returned white captive’s woodland ensemble, which I find exciting.

Currently, fresh venison is at the top of Mi-ki-naak’s list. He’s spent a few days afield with a British ranger from Capt. Joseph Hopkins Company of Rangers, but neither has unleashed a death sphere—yet. And when a hunting companion is not available, Mi-ki-naak plunges into the wilderness by himself.

The hunter orange silk scarf (required by Michigan’s hunting regulations for deer) is the only item that is not distinctive to this character, but there is a “work around” coming, I think. He has his own wool trade blanket, originally white with a black stripe, but dyed brown with walnut hulls to better blend into the forest—even when the glade turns white. Oh, he has an Ojibwe-style peaked wigwam started overlooking the Riviere aux Raisins. Available time, again… 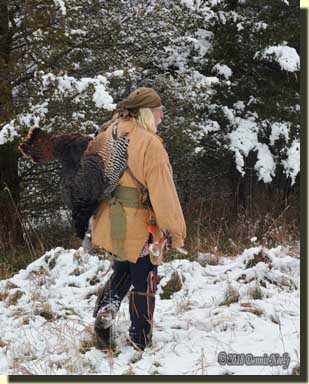 Msko-waagosh time-traveled to 1796 this fall, too. The unseasonable snows and frigid cold of early November proved a bit challenging, but this experienced woodsman still brought wild game back to camp. I can’t wait to share the story of the “snow bird.”

Unfortunately, his wigwam no longer stands in the hollow, thanks to heavy spring snows and a blustery wind. What a disappointment. Is there a pattern developing here with these characters and their shelters—falling limbs, heavy snows?

A new, light-green, wool sash replaced the hand-me-down, overlooked from the Red Fox’s creation. His shot pouch has been cleaned out and careful attention given to making sure each item of clothing or accoutrement is distinctive to his 1790-era existence. Reconstructing the dome-shaped wigwam is not possible this fall. A temporary brush shelter was planned, but the weather did not cooperate. There is still time, but…

The trading post hunter feels neglected, so a new pair of broad-fall breeches needs only six more buttons and button holes. I’ve threatened to take them to the woods and sew while waiting on a fine buck. I just can’t come up with the time to finish this project. I’ll probably outgrow them. The old ones wouldn’t come clean, then the legs shredded; there’s a story there…

Again, this character will get his pass-alongs back. Some will be kept and others repurposed. As I have written, the arrival of Mi-ki-naak afforded time to re-evaluate each persona and the end result is positive. His shelter is on hold, too. I sat at the edge of the sedge grass in the river bottom a week ago and just started chuckling as a doe and her summer fawn approached. It seems all of my characters are homeless woodland wanderers, and not one has a complete set of clothes.

Emails and comments to musings, mostly Snapshot Saturday postings, always bring ideas for blog posts to light. Please bear with me; I have a list that I will get to, I hope. It seems nothing is certain anymore. Miss Tami just said the cold drizzle is subsiding. Mi-ki-naak has a great desire to head back to his forest home. So for now, instead of me writing, the Snapping Turtle is going hunting!

One Response to Snapping Turtle is Hunting…