The Answer is Not Simple 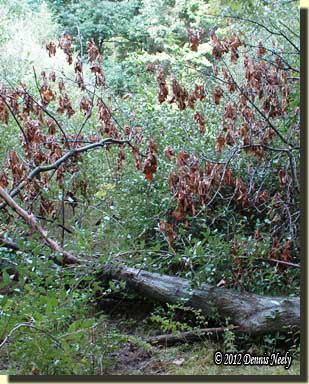 A fallen red oak blocked the trail. Spring’s broad, lush leaves hung curled, brown and brittle. After stepping over the trunk, worn-out elk moccasins continued through the shadows. Blue jays screamed high atop a far hill, but not for me. Small, fragile acorns, stunted from the summer’s long drought, littered the earthen path, and now and again crunched. Overhead, a gentle northwest breeze rustled the forest’s dense foliage.

The trail forked at the end of the isthmus, the one that separates the nasty thicket from the huckleberry swamp. After a long consideration, I chose to climb the steep hill, at least as far as the four oaks that I usually favor. With a dozen paces to go, I leaned against a young sapling, then slid down and sat cross-legged with my back against that tree. I sought not game, but rather the solace, tranquility and peace that often marks my version of the Old Northwest Territory, not far from the headwaters of the River Raisin, on that late September morn, in 1795.

Old Turkey Feathers, a 30-plus-year veteran of history-based sojourns, rested across my leather-clad thighs. The Northwest gun’s bore was empty, the squirrels safe, because my alter ego had but a few precious minutes allotted to serious time travel—such is life these days.

I closed my eyes and listened to the wind, the chipping sparrows and a doe snorting somewhere up the rise from the water hole at the north end of the huckleberry swamp. My soul drifted in Paradise. An acorn thumped down, beneath a thick oak, three trees beyond the clump of four. I felt a brief splash of warming sunlight, and smelled the aroma of rotting leaves, brushed aside by my left moccasin before I sat. Another acorn struck, and as I opened my eyes, I spied the gray streak of a third. One by one, I surveyed the oak’s upper branches, limbs and twigs.

“Chkk, chkk, chkk, chkk.” A fox squirrel barked, but I could not find it. My right thumb wobbled the firelock’s hammer from side to side, itching to pull it to full cock.

My trigger finger began rocking the frizzen on its stiff spring, and when I tired of that pastime, my thumb again fiddled with the loose hammer.

“Chkk, chkk, chkk, chkk,” echoed in the glade, every minute or so until wailing sirens in the settlement tugged my alter ego over time’s threshold. With a deep sigh, I slid the folded journal page that recounted that morning’s brief adventure into its buckskin pouch. As I was about to tuck the brass lead holder into the pouch, the fox squirrel spiraled down the tree. My fingers slipped the page from the leather envelope and continued scribbling.

I turned a bit to my right to gain a better view, only to have a different squirrel chastise me from behind. Six paces distant and not more than four trade gun lengths up, a fox squirrel hung upside down, chattering non-stop. I eased my head toward the tree. My eyes looked up. Instead of cream-colored underbelly fur, this young rascal had all black. He was clearly a fox squirrel, but like some I have seen on the North-Forty, anywhere tan fur should be, black fur was. But alas, I had stayed too long in the Old Northwest Territory.

The Authenticity of Well-Worn

Somewhere in the midst of searching for the fox squirrel, I became aware that I was unconsciously fiddling with the hammer on Old Turkey Feathers’ lock. The hammer “wobbles” when at half or full cock. I try to keep reminding myself that a flint lock is a machine, a machine with multiple moving parts that needs constant attention, a machine upon which I depend for food.

At least once a year the entire gun gets torn down and given a judicious cleaning, which includes complete dis-assembly of the lock.  I peen the backside of the hammer to remedy the situation, but by nature a trade gun lock is large, the mainspring is forceful and the end result is a constant wearing pressure on somewhat delicate components. The repeated smashing of an inch-and-an-eighth English flint against a stout frizzen exacts a heavy toll.

If the mainspring is removed, the tail of the lock gripped in my fingers and the lock shaken, it rattles like an old log chain—sometimes parts actually fall off. The few friends who have witnessed this all smile politely, pause for a respectable moment and ask, “Why don’t you just replace that lock?” For me, the answer is not simple. 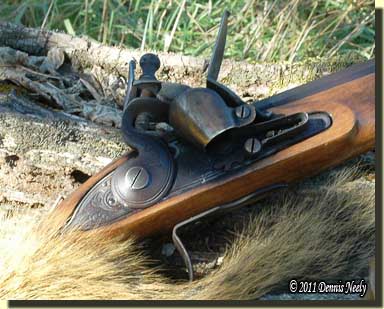 The lock is nothing fancy. It was an imported Lott lock that came with the parts kit when I first built the Northwest gun, back in the late 1970s. When the first lock began showing serious signs of wear, the answer was simple: I dickered for a new one from a trader in the first room at the Kalamazoo Living History Show ™. I think we settled on $50 for that lock. In the years that followed, I acquired a third frizzen, frizzen spring, mainspring and other assorted parts in a similar manner, all stored in a little cloth sack in the muzzleloading cabinet.

The “third” lock is a combination of “best parts” from the two locks and spare parts, and it is worn out now, too. Five years ago my daughters bought a new lock for the trade gun for Christmas. I have almost re-mortised and re-fitted the new lock on several occasions. Most times, I say I need the gun for an upcoming hunt, and with that excuse, I put off the conversion. In truth, I’m concerned the new lock will change the character of Old Turkey Feathers, and once converted, there will be no going back.

In the post, “Overcoming Denial Takes Time”, I wrote about the impression left from a combination of clothing and accoutrements that show varying states of wear and tear. For a seasoned traditional black powder hunter, a brand new trade gun is just as out of place as one that is antiqued to perfection and looks two centuries old. The wear and tear on Old Turkey Feathers makes it look a dozen or so years old. As I sat against that oak surveying the branches and limbs, I reasoned that Old Turkey Feathers just wouldn’t be Old Turkey Feathers with a new lock.

I got to chuckling when I thought about the loose hammer, Alexander Henry and the condition of his lock on a December hunt after the fall of Fort Michilimackinac in 1763.

“Desirous of killing one of them [“red deer”] for food, I hid myself in the bushes, and on a large one coming near, presented my piece, which missed fire on account of the priming having been wetted. The animals walked along without taking the least alarm; and having reloaded my gun, I followed them and presented a second time. But now a disaster of the heaviest kind had befallen me; for on attempting to fire I found that I had lost the cock. I had previously lost the screw by which it was fastened to the lock; and to prevent this from being lost also I had tied it in its place with a leather string; the lock, to prevent its catching in the bows, I had carried under my molton coat.” (Armour, Attack…, 88)

And as woodland thoughts go, I got to wondering about the availability of parts on the frontier, away from a fort or trading post. Perhaps a partial answer lies in the widespread availability of trade guns within the fur trade as noted by Charles E. Hanson, Jr. in his book, The Northwest Gun:

“These guns were so universally used by the Indians that tribal gun repair men evidently became necessary. A large cache of seventeenth century gun parts was found some years ago in New York state. There is a similar but smaller assortment of flintlock parts in the collections of the Nebraska State Historical Society which were flintlock parts excavated from a Pawnee Indian village site of about 1820-1845.” (Hanson, 2)

But I have limits in my quest for authenticity. Like John Tanner, the Falcon, on more than one occasion I have found myself without a death messenger in my pouch, but unlike Tanner, I would never load my lock screws:

“I went to hunt with only three balls in my pouch, and finding a large buck moose, I fired at him rather hastily, and missed him twice in succession. The third time I hit but did not kill him, only wounding him in the shoulder. I pursued, and at length over took him, but having no balls, I took the screws out of my gun, tying the lock on with a string, and it was not till after I had shot three of them into him that he fell.” (Tanner, 105)