The Coyotes Taught a Valuable Lesson

Cortland apples browned beside sizzling venison steaks. Not long before, dusk’s long shadows had succumbed to night’s darkness. A stick held a chunk of meat firm to the kettle’s bottom while the butcher knife sliced. The smell of the evening’s campfires mixed with the sweetness of drying corn and night’s cool dampness. Muscles ached from a hard day’s hunt.

Halfway through the meager meal, the butcher knife cleaved a long sliver from a dry twig. The sliver’s tip caught fire from a glowing coal, then lit the half-burned candle’s wick. The lantern’s iron bail clattered as I closed the wooden door and hung the lantern from a wrought hook, the one David Long forged. Before I could return to supper, a ruckus arose on the east edge of the camp as a hunter returned with a fine doe. I set the kettle to the side of the fire as all in camp paused to gather ‘round the fortunate woodsman.

In great detail, the hunter told how the doe browsed closer and closer to his lair. He held his hands arched above his head as he described the bull elk that stood on the hill, well out of rifle range. When the doe stepped in a small opening, this seasoned woodsman boasted of how his firelock never hesitated and how he heard the death messenger hit. The doe ran but a short distance, he said. 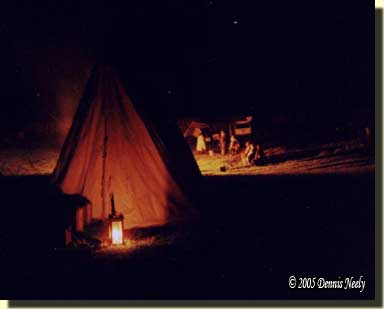 In due time, the tales subsided. I walked up the hill to my wedge tent, slid the brass kettle back into the coals and sat cross-legged beside the little fire. I supped as the stars came out, in the tranquility of an 18th-century Paradise. When the kettle was empty, I rinsed it with water and turned it upside down on a nearby kindling split.

I thought of turning in, but I saw a hunter with a lantern move to the center of the camp; the lantern came to rest on the ground at the council fire. In the afternoon, two of the women in camp tented dried branches against an old rotted stump. They hauled leaves bundled in a half blanket and stuffed the leaves in the base of the pyramid. After three quick strikes and a little coaxing, tinder flamed. With care, the man shoved the flame into the leaves and in no time a roaring fire lit the dozen or so lodges as sparks showered high in the darkness, floated and then vanished.

Like moths hovering near a flame, the hunters milled about the council fire, some with jugs and some without. In a fashion, everyone sat around the burning stump telling of their adventures that day, and in the past. Some told of the elk, others spoke of seeing the few buffalo that roamed the wooded hills near the camp, and one fellow talked of harrowing pursuits in the great mountains far to the west of the Mississippi.

Tired and weary, I walked up the hill to my wedge tent and slipped into a cold blanket. Hooting and hollering woke me from time to time and then I fell into a deep, restful sleep. A few hours before daybreak I awoke to a whiny yipping; I thought some of the hangers-on were funning with the Captain.

As my head cleared, I realized coyotes were yipping to the north of the canvas village. I counted at least three voices and thought a fourth was trailing behind. The pack skirted the waterhole just down the hill, then with a mix of barks and yips the coyotes looped around the smoking council fire pit and passed my wedge.

In an instant, I threw the four-point blanket to the side, got to my feet and parted the tent’s flaps, but I could not see the varmints, despite the moonlight. Angry voices and vulgar curses filled the camp, but in time subsided. I stood in the cold, listening as the pack zigzagged south. A bit shivery, I cuddled back into my blankets. I don’t remember falling to sleep, only waking to the ke-honks of low-flying geese at first light.

Breakfast conversation centered on the coyotes’ late night foray. I found tracks in the sand, eight feet from my lodge; the coyotes entered the standing corn to the south, which explained why I wasn’t able to see them. The bold invasion turned out to be a highlight of the weekend. The incident is one that I point to when discussing one of my favorite passages from Joseph Doddridge’s writings:

“The whole business of the hunter consists of a succession of intrigues…If he succeeded in killing a deer, he skinned it and hung it up out of the reach of the wolves, and immediately resumed the chase till the close of the evening, when he bent his course towards his camp; when arrived there he kindled up his fire, and together with his fellow hunter cooked his supper. The supper finished, the adventures of the day furnished the tales for the evening” (Doddridge, 101).

Normally, I would talk about the living history significance of re-creating an 18th-century hunting camp, but there is a darker side to this story that needs to be told and heeded. First, most folks in this group did not know each other. News of the hunting camp came from handbills, limited print advertising and word of mouth. If I recall, I think the assemblage of hunters hailed from four different states: Illinois, Indiana, Ohio and Michigan. I was specifically invited to attend by the “Captain” who organized the hunt/shoot/rendezvous with hopes that I would write a feature story or two about the event. As it turned out, I traveled the farthest, over 450 miles.

The Captain had a printed set of “camp rules,” which he gave to each participant upon arrival. These rules were heavy to the shooting side of the gathering, but still emphasized safety. Hidden toward the end of the list was a reminder to keep gunpowder away from the open fires and that no “loaded” guns were allowed in camp.

In the afternoon of the first day, the names of all registered participants went into a bowl and one lucky hunter won a deer hunt on the landowner’s hunting preserve. The rest of us followed a trail to an old gravel pit for a fine woodswalk, which ended just before the supper hour. We all returned to camp with muzzleloaders to clean, and when the lucky hunter returned with his fallow deer, his arm was empty, too.

Within the camp were four fellows who had hunted together before. These hunters were seasoned woodsmen, and since they knew each other, they pitched their tents side-by-side on the north edge of the camp and dug a common fire pit. At the council fire that cool Saturday evening, one of the four declared that “they would be ready if the coyotes dared run through camp, again.” Another hunter asked what that meant and was quickly told “We’re loaded and primed for coyote!”

With a little prodding, the Captain reiterated that there were no “loaded” arms allowed in camp. After further questioning, he stated “barrels must be empty and uncharged.” He told the four if any of them had a charge in the barrel, they needed to pull it. “We’re not loaded, yet,” was the group response. A couple hours later, I headed up the hill to bed, not giving the statements anymore thought.

As I nursed a small fire for breakfast, the hunter camped to the west of me exclaimed something to the effect of “Hey, look at that,” as he pointed to the north camp. I swung around in time to see two of the hunters standing in front of their tents with their rifles in hand, dumping priming powder from the pans. My neighbor was on his feet, marching fast to the Captain’s lodge before the offenders re-entered their tents. In a few moments my neighbor returned shaking his head in disgust.

It seems that after the rest of the camp turned in, the four coaxed the Captain into allowing them to keep their rifles charged, but unprimed. After breakfast, my neighbor and I both started breaking camp. We left a little before noon; neither of us stayed for the afternoon’s shoot or the awards ceremony. 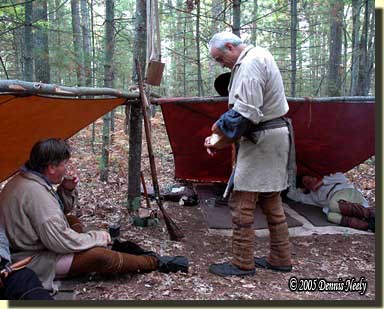 I retell this story from time to time to make a point: it is imperative that all members of a hunting camp, modern or traditional, agree on a few necessary safety rules and then enforce those rules. I shudder every time I think about those coyotes returning on that Saturday night, and then I thank God they didn’t.

There are no set hunting camp standards that I am aware of. Over the years I have been fortunate to participate in many traditional black powder hunting camps. In general, muzzleloaders with a charge in the barrel must be unprimed or uncapped with the touch hole or nipple plugged or covered before the arm is brought into camp. “Charged and unprimed/uncapped” guns are allowed in camp during the day as an accommodation to hunters as they come and go from the field. In some camps an area is designated for storing these guns. Again, in general, at the end of the day, the muzzleloader must be discharged and kept overnight in camp with an uncharged barrel, preferably stowed in a case. If the gun has been discharged in the course of the pursuit, it needs to be cleaned and tended to, anyway.

Again, when setting up a traditional black powder hunting camp, insist that all participants agree on a few necessary safety rules and then enforce those rules.