Buffalo hoof prints pocked the frozen trace. Wool-lined moccasins crunched and crackled and slid about on the old snow in the near-zero January cold. Partway up a rolling knob a woodsman’s fur-backed mitten signaled for his two companions to halt. The French hunter crouched forward, then his head rose slow, following the curve of a pine tree’s trunk. After a long look-see he dropped to one knee. The mitten urged his partners closer, but with caution. 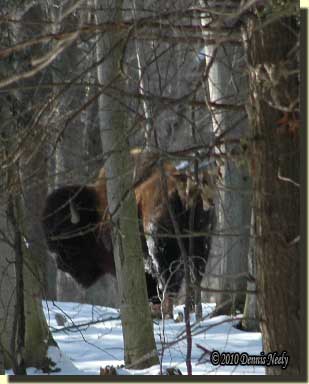 As the two hunters stalked in different directions through the pine grove’s dark shadows, a magnificent bull got to his feet. In a few heartbeats a second, younger bull stood as the first turned and walked south. Cows and heifers got up, stretched, then ambled after the two bulls, nose to tail in a single file line. The three could only watch as the wild cattle disappeared over the hill’s crest.

“They headed south,” Schmitz said, still whispering as he peered at the empty hilltop.

“I can try to circle ahead of them,” Freiburger offered, “and cut them off before they get out of the woods. If you both go east, I’ll try to push them back on the east trail.”

“Okay, but be careful. You don’t need a buffalo charging you,” Schmitz said.

Not knowing for sure where the buffalo were, Coleman and Schmitz stalked tree to tree across the knob, down the far side and up again to the east trail. Once there, Schmitz brushed the snow off the two main limbs of an oak top, sat on the lower limb and rested his Fusil de Chasse over the upper branch. The woodsman’s deathly shape melted in to the natural lair. Coleman leaned against a stout oak, maybe 20 paces north of the oak top, half hidden behind the trunk.

Now and again the pair exchanged glances, but neither spoke or moved quick. The better part of an hour labored by, then Coleman made a faint kissing sound to garner his companion’s attention. With his eyes fixed on the center of the forest, Coleman made it clear the herd was approaching. From his sight line, it appeared they would pass to the west, rather than on the east trail, but neither hunter committed, choosing to wait.

At about 100 paces the column halted and the buffaloes milled about, looking like they intended to lie down. But the big bull seemed impatient. After a few tense minutes, he started to walk due east. The younger bull balked and stood his ground, but when the herd sire kept plodding, the young bull relented. The cows and heifers joined the procession. And at the east trail, the wild cattle turned north and closed ranks, nose to tail. The two woodsmen glanced at each other, then cocked and shouldered their arms. The moment of truth had arrived.

On that cold January morning, I tagged along on a traditional black powder buffalo hunt. I was dressed as an 18th-century woodsman, but I carried a Nikon camera, a journal page and a brass lead-holder instead of “Old Turkey Feathers.”

By my definition, the primary purpose of any traditional black powder hunt is to provide food for the family dinner table, but to do so in an historically accurate manner, centering on a bygone era of the hunter’s choosing. Ed Schmitz, Gary Freiburger and Rex Coleman were doing just that, but at a managed game preserve, which raises an important point relative to traditional hunting methodology. 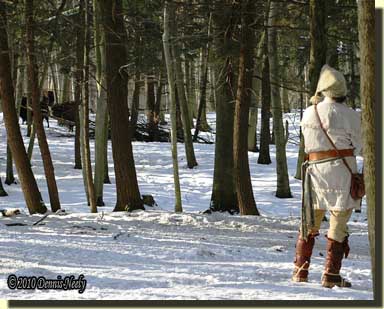 The “third” key element of any traditional black powder hunt is the reliance on fair-chase—incorporating our rich American hunting history and using an arm stoked with black powder as a propellant are the other two. This third element, a fair-chase pursuit, clearly was not present; yet, I was hard pressed to tell the difference, other than the buffalo were not allowed to run for miles in one direction as the old journals sometimes read. As Ed Schmitz later said, “Les’ ranch covers a large area. When it takes me two and a half days to find an animal, at it all daylight hours, and you’re beat from the chase, then to get close and finally harvest [a buffalo], it’s a hunt.”

The other day, as I skimmed through Duncan M’Gillivray’s journal searching for a different passage, I happened upon one of his buffalo hunting exploits. In 1794, Duncan M’Gillivray, the younger brother of William M’Gillivray and a nephew of Simon McTavish (McTavish, Frobisher & Co.), wintered as a clerk for the North West Company at Fort George on the Saskatchewan River. On the trip to Fort George, M’Gillivray wrote:

“20th. Septr. [1794]…Tho’ we killed abundance of animals to maintain the people, yet the Buffaloes are not so numerous as usual in these parts…At 3 O’clock P.M. Mr. Shaw killed a large Stag; soon after I crawled up to 2 Bulls and shot one of them through the heart; the other hung over him as if to lament the loss of his companion and received my shot in the ribs upon which he advanced a little further and lay down with great composure. I was not unaware of the danger of approaching a wounded Buffalo in a capacity to shew his resentment, but I apprehended no danger from him, as he seemed mortally wounded, however he soon convinced me of my error, by suddenly starting up and springing upon me with the quickness of lightening, and before I had time to fly he caught me betwixt his horns (one of which tore my shirt and Jacket) and tossed me a great height in the air. Tho’ I was greatly stunned by the Fall, yet I recovered myself as soon as possible and discharged my piece at his head, which, with seeing Mr. Shaw running to my assistance, made him scamper away into the woods, where we pursued him and found him dead at a small distance, and if the approaching night had not prevented us we should have kindled a fire upon his hatefull carcase.” (M’Gillivray, 24 – 25)

This passage brought to mind Ed Schmitz’s admonition to Gary Freiburger, more of a reminder than a warning; Freiburger was fully aware of how dangerous an American bison can be. “This isn’t easy,” he later said. “They’re not tied to the fence…they’re still wild animals. They’ll kill you if you aren’t careful. They’re like a freight train.”

Caught up in the midst of a real life drama, Schmitz’s words, “You don’t need a buffalo charging you,” served only as a statement of fact. At the time, the passing phrase did not unlock time’s portal, rather it lay dormant for almost two years. I have read M’Gillivray’s words before, highlighted some of the sentences and even put a notation in the margin, but only after a firsthand pursuit of wild cattle did they come to life—my experience mirrored that of M’Gillivray. I also realized M’Gillivray failed to heed the warning, “I was not unaware of the danger of approaching a wounded Buffalo,” and the consequences of that choice.

Some traditional hunts turn out to be ordinary while others prove to be extraordinary. The latter is true of that traditional buffalo hunt, in part because it provided, and continues to provide, a number of pristine moments. As a traditional woodsman, I have no idea what the outcome of a given living history simulation will be. No time traveler does.

A specific list of dos and don’ts, either prior to or during a given traditional hunting scenario, simply does not exist. Certainly, diligence, attention to detail and an honest attempt at maintaining authenticity help, but there is no secret path, no magic formula for producing a meaningful and memorable historical simulation. The best experiences, the ones I cherished the most, materialize when I least expect it. Yet, in truth, such happenings can never come about if I do not strive to venture back in time at every opportunity.