And Yes, I Answer!

“That should be enough,” I said, walking to the truck with two big fistfuls of oak leaves pressed against each other. A cold but gentle northwest breeze dislodged a few strays and sent them fluttering on their way. I dumped the right handful first, in the back corner of the truck box, then the left. The truck cap’s door snapped closed with a rubbery thud as the sun poked through grayish clouds.

If you must know, it was late March, and the year was 2013. There was no intent to travel back in time that afternoon, but I felt the urge once or twice. I had an hour or so set aside—well, rescheduled to be more accurate—for range time, I think the first such indulgence in over a year.

The official work plan said “turkey head pattern tests,” but given the allotted time I knew a dozen shots was all I could hope for. It didn’t matter. I grabbed the leaves driving to the range. I saw them windrowed against some deep grass along the two-track and knew they would be dry. I suppose it looked funny, but, as I said, it didn’t matter.

Another hen, farther to the south, chimed in as I uncased Old Turkey Feathers. “What a joyous afternoon. Thank you, Lord,” I whispered.

The powder horn, shot bag and brass measure took their usual places on the tailgate. The horn felt light, so I shook it. “Hmmm, you didn’t refill it after the last outdoor show,” I muttered to no one in particular. Before leaving the house, I had put a spare can of fffg in the truck, along with the tub of #5 shot, allowing for my usual absentmindedness. Without thinking, I started humming the theme to The Last of the Mohicans as the black granules trickled into the horn’s spout. 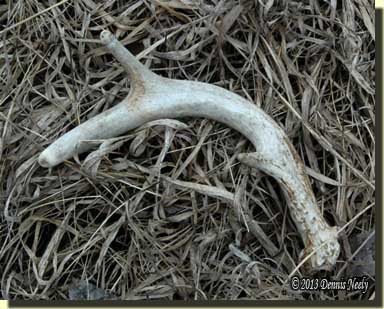 “Just keep teasing. Your day is coming Mr. Longbeard,” I said, walking downrange with a turkey-head target in my hand. “We’ll see how you fare in a minute.” Then, as I looked to my left, I spotted a shed antler in the grass, not fifteen paces away. The little three-point right-beam antler was an unexpected treasure. “Well, that makes the afternoon a success before I even get started. And I didn’t have to fire a shot.”

By now it should be obvious I talk to myself when I am alone at the range—and yes, I answer!

Spring turkey hunting is still a few weeks away, but it is not too early to start making preparations. I hope to begin scouting this weekend, and maybe Tami will come along, too. She’s looking forward to the spring hunt, her first chance in three years.

That afternoon’s session was a holdover from a November turkey hunt where I took a fine young jake. I was only able to hunt a few times, so when he offered, Old Turkey Feathers accepted. But sometimes it seems success comes with reservations. I only found three pellets in that jake’s head and neck: one in the brain and two in the spine. The jake never moved, but the results ate at me over the winter.

I always check my birds, or any game, for that matter, for hits in the kill zone. I want to know how the Northwest gun performed, even after thirty years of faithful companionship. Of course, we have no control of the death bees once they leave the hive. The concern is born out of a deep respect for the game and a desire to affect a clean and humane kill.

In my quest for greater authenticity, I started using natural wadding materials about three years ago. A cloud of doubt hangs over any major change, especially when that change is driven by choice, rather than necessity. I wanted to retest the pellet distribution to make sure my perception of how the load was performing matched reality.

With the first target posted at 28 paces (25 yards), I followed the same loading procedure as last fall. I used the same powder charge, two oak leaves, the same shot charge and one oak leaf over the shot. That first target was the worst of the day, with ten hits in the head and neck, five in the kill zone. The best was twenty-four, with twelve in the kill zone. The average was fifteen/seven. 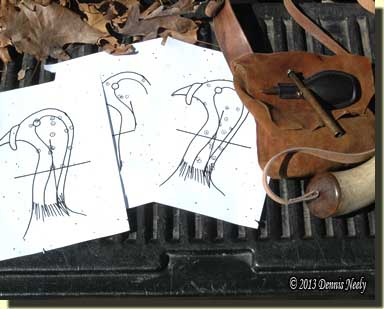 The March range results duplicated those of last fall, and that raises two important points in my mind. First, structured range practice is an absolute necessity for the traditional black powder hunter (and modern hunters, as well); and second, if the results are valid, they can be duplicated under similar conditions.

A few Saturdays ago, I covered the southeast Michigan Trade Gun Round Robin for a future black powder shooting sports article in Woods-N-Water News. Two competitors were shooting their trade guns for the first time. One smoothbore was newly completed and still in the white, the other was an older gun, purchased the week before.

We talked separately, but each fellow made the same statement that the gun was new and that he hadn’t been to the range yet. Both chose safe, conservative target loads, based on their experience, and neither had grand expectations beyond having a good time. The point I wish to make is that both of these individuals acknowledged that range practice is an integral part of familiarizing oneself with a given gun.

On the other side of the coin, I spoke with a French & Indian War re-enactor a while back who planned to hunt deer during Michigan’s December muzzleloading season with his Brown Bess. This living historian had never fired a round ball from the Bess, only powder charges in mock battles. “A fellow re-enactor told me what load to use,” he said, much to my consternation. I explained the importance of first-hand range experience, and to his credit, he then understood and accepted the responsibility he had to the game he intended to pursue.

Living historians and students of the wilderness classroom often fail to fully realize the need for clearly defining the steps they follow in their laboratory experiments. The goal is to experience the happenings recorded in an old journal, but to do so in a manner that can be duplicated over and over under similar circumstances with similar results.

If I am tweaking a load during range practice, I only change one component at a time and test the load multiple times. The reason behind this process is to create a consistent, efficient load that can be repeated time and time again—similar circumstances/similar results.

In the case of the March tests, I changed nothing, but instead, followed the same steps used the day I shot the jake, which were the same steps used at the range, two falls ago. The targets from both sessions are essentially interchangeable, thus duplicating the first findings. My doubt is not completely dispelled, and probably never will be. I intend to return to the hillside and look for other reasons for that particular load’s poor performance. And if need be, I may set up a portable turkey-head target and blast away, which sounds like fun. And yes, I will talk to myself through the whole process.

One Response to And Yes, I Answer!