The Powder Horn Blew Up!

“I was very fortunate,” my friend said. His voice betrayed the emotional aftermath he was trying to contain. “You heard the powder horn blew up? I always stress safety. I can’t believe it happened, but it’s got a lot of people thinking and talking, so it’s a ‘positive accident,’ if it helps make people, other shooters, aware.

“We were at Laingsburg [Michigan] for the January woodswalk and almost through all the targets. I had my Southern Mountain rifle, it’s .50-caliber, my favorite rifle. I started to load and got interrupted. I didn’t know where I was at in my loading sequence, so I put a little bit of priming in the pan, held the muzzle down and touched it off. I held the rifle out in front of me, midway in my body, which I usually do. It had to be about 18 to 20 inches from the horn. That’s when I had a ball of fire on both sides of my body. 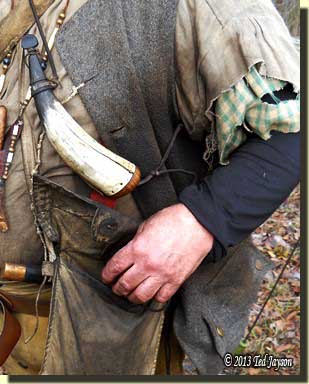 “I had two shirts on, I think they were cotton, and a wool weskit [on top]. The weskit had a glowing red circle where it was burning. The shirts had a little bit of flame. I was shooting with four guys, and two started beating out the flames. They pulled out their knives and cut the sleeves off. I was very fortunate; just two small spots on my arm that got burnt, and they went away in a few days.

“I had maybe 300 grains left in the horn. The plug was in, I remember checking that. The horn had a hairline crack. It didn’t look all the way through. I put sealer along the crack. The rupture occurred along that crack.

“I’ve stayed awake nights thinking about it. About the only thing I can think of is a spark got into that hairline crack. I didn’t think it was all the way through or unsafe. I’ll never do that again, use a cracked horn, I’ll tell you.

“I’m right handed and left-eye dominate. I’ve had issues over the years with my right shoulder, so I started shooting left handed. It was a left handed gun. I find it more convenient to have the horn on my left side, and I like it high up. I’ve started putting the horn on the opposite side of my body.

“I carry a canvas possibles bag on my left, four or five inches above my hip bone, and my shooting pouch on the right. The heat from the explosion went through the canvas [of the possibles bag] and charred the patch material on balls in a loading block, and dried up the bear grease I had on the patches.

“A lot of guys glue the end plug in, and I’m not sure that’s a good idea. I don’t, I make it fit tight, then tap it in and set it with toothpicks. I think that helped release some of the pressure.”

Sifting Through the Aftermath 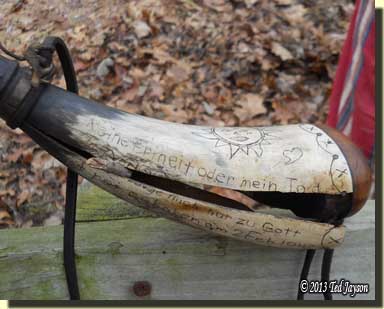 With any accident all of the details are never fully known or understood. The shooters around my friend were just as baffled with the situation as he was. No one has a good explanation, and I doubt anyone ever will. What we are left with is a life lesson that demands a little soul-searching on an individual basis, or at least that is how I view it.

One of the first considerations is to put the incident in perspective. My friend has 49 years of black powder experience, is an avid competitor and has fired thousands of shots. Add in the lifetime shooting experience of the folks on that woodswalk, plus all the other participants at matches around the state, and the number of potential situations grows while the frequency per shot of a horn blowing up diminishes. But I don’t feel that absolves me, or any other black powder enthusiast, from exercising due care.

I feel the same concern my friend does; that accident has eaten at me for many weeks. The day I received the first report, I checked my horn, Tami’s horn and the two “loaner” horns I have. Doubts kept gnawing so I put on my OptiVisor® and took a second gander.

As I told my friend, I fear a missing horn plug the most. I am a brush hunter. Being right handed, I carry my horn on the right, at the lower ribs and to the back, unless it works forward in the heat of a chase. I spend a lot of hours in the field, and on occasion a twig will catch the leather thong on the horn’s plug and pull it.

Over the years I have learned to check the plug and adjust the horn regularly throughout a sojourn. Another traditional hunter offered a solution to brush-pulled plugs: switch to a small day horn that can be carried in the shot pouch. The loaner outfit my son-in-law hunts with includes a small day horn, and I recently picked up a small flask for the pouch that goes with the fusil de chasse.

But that is not without possible problems: say the plug comes out and spills powder in the pouch? I have heard of this happening at battle re-enactments using paper cartridges. Some events require all shot pouches to have flaps that close over the pouch.

As another example, I remember being told of one living historian who kept tucking the “used” paper cartridge in his tri-corn so as not to litter the historic site. Loose powder collected in his hat brim and towards the end of the event it went “POOOFFF!”

Switching the horn to the opposite side of the body offers greater separation, but when I tried it a few years ago, I found the new placement very awkward and abandoned the attempt. I have since noticed several shooters follow this practice and their loading process seems fluid and unhindered. I think I will revisit this choice while on the practice range this summer.

But subtle changes may have unintended consequences, too. In my quest for greater authenticity, I started priming from my horn (3Fg) some years back. With the horn accident fresh in my mind, I looked at a recent hunting photo that showed a brilliant pan flash and gained a new perspective. The image showed hundreds of orange “streamers” blown from the pan. I compared the image to several taken when I primed with 4Fg and saw a significant difference.

The granules in the coarser powder contain more charcoal solids than the finer powder and thus burn longer. The barrel’s backpressure blows the pan clean, scattering the still-burning granules and increasing the chances for disaster. Percussion caps show similar streaming embers, so this is not just a flintlock issue. I’m still mulling this over…

If nothing else, there seems to be a consensus of opinion that all horns, flasks or other powder containers should be inspected on a regular basis. At the first inkling of a defect, the container must be relegated to “wall hanger status” and not used further. Sometimes that choice is a difficult one, but safety overrules sentiment.

Opinion on gluing or not gluing in the end plug seems evenly divided. Given the cost of a powder horn, testing of the glue/no-glue theory will be expensive, but not impossible. Perhaps this subject needs the backing of either the MSMLA or the NMLRA, and I intend to pursue the matter further.

By its very nature, traditional black powder hunting depends of the safe handling, storage and use of a dangerous explosive compound. We all bear a responsibility to keep our minds focused on the seriousness of our hobby, even in the midst of the simplest of pursuits. In no way am I saying or implying my friend let down his guard for a moment, but what I am saying is even with diligence and a constant eye on safety, accidents happen. It is our job to minimize the probability. And as he said, his unfortunate experience has “got a lot of people thinking and talking,” and that’s a “positive.”

15 Responses to The Powder Horn Blew Up!