Hacked Away Years Ago

Morning sun reflected off the tiny creek. The shiny silver band curled close to the big swamp’s edge, then disappeared in the matted canary grass. Unseen cardinals whit-sued to the south, this side of the watering hole. My moccasins crested the hog-back ridge. I stood silent, my eyes surveying the cedar-covered hillside.

What sounded like a dozen or so crows raised a ruckus, a good distance west of fox hill. The air smelled clean, warm and inviting. In a conscious moment, I felt the years melt away. A chipping sparrow bounced on a wispy cedar twig a few trees distant. “Chip! Chip, chip, chip,” it sang, welcoming me back to my 18th-century Eden.

My moccasins crossed the upper deer trail. I slipped between two cedar trees and sat against the right one. That tree’s dead branches had been hacked away years ago by Ainslie’s belt ax, a gift from my late wife, Mary. As I settled in on a preseason scout, a red-winged blackbird warbled from out in the swamp, close to the wallow: “Oh-ka-leeee. Oh-ka-leeee. Oh-ka-leeee.” 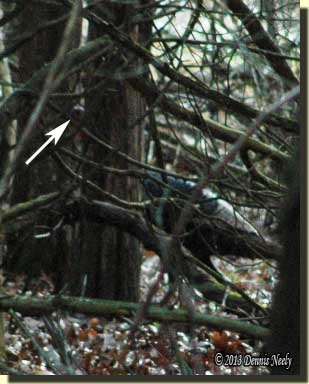 When the tom stopped, I could only see his body. Later, when I viewed the image, I could see his red head in the space between two cedar trees and his eye (see arrow) fixed on my lair.

“Utt…uttt.” Not ten minutes after I crested the ridge and took my seat I heard the first hushed clucks from the far side of the swamp. The utterance was sharp, deep in tone and sounded like it came from near the old apple tree—clearly an older turkey. The putts marked the bird’s progress as it crossed east to west, following a winding trail that skirted the wallow’s mucky wetness.

“Kee-honk, kee-honk, yonk, yonk…” The Canada geese sounded high up, well off to the east. A few geese answered behind me, out on the River Raisin’s lily-pad flats. With the geese music, the clucks and putts ceased, but my concentration held steadfast to the thicket where the trail broke from the swamp. A shiny black shape moved behind the gray tangle of dead branches. A red head passed through a small, sunlit space. My heart thumped.

Driven by cautious steps, the tom’s body herky-jerked right, fifty-paces distant. “Utt,” he clucked as he stood tall and gazed uphill. “Utt…” He turned away, pecked at the leaves twice, then started walking on the doe trail that hugged the swamp’s edge. I feared he saw me keeping still, but he showed no alarm. I rationalized that he might have sensed an intruder. After viewing the photographs there is no question he spied this woodland tenant, a would-be time traveler, two-centuries removed.

The Importance of Place

For the last six months, the majority of my research has centered on “captivity narratives:” the first-person accounts of young men and women captured by marauding Indian warriors and adopted into Native American society. These accounts are fascinating, but not without some problems—often as a reflection of the prisoner’s age, quality of treatment or personal agenda at the time the account was written.

A given captive’s odyssey usually covers large geographical areas. To add perspective for the reader, the author references the region’s major rivers, tributaries or known landmarks of that era. In order to follow the captive’s journey, the modern reader must pull out an atlas and try to connect today’s names with those of long ago—sometimes that works, and sometimes it doesn’t. The same holds true for many 18th-century journals and points out the importance of place in the telling of any tale.

Most narratives were written years after the fact, and some, like Jonathan Alder’s, note the changes in the landscape in hopes the reader might recognize “modern-day” landmarks:

“…They went on down Darby as far as Duere Mill, and there fell in with another company and came back up on Little Darby opposite of where Hampton is, and there built a fort and all moved into that. The land on which the fort stood is now owned by Alex Wilson…” (Alder, 153)

Earlier in his narrative, Alder attempted to set the record straight as to the proper names of some of the rivers near his Ohio-country home:

“The word Scioto is not the proper name for that river. Its proper name is Scinutu, but because it is difficult for the whites to give it the right sound, they call it Scioto. The Indians’ original name for Little Darby was Sycamore Creek, from the great quantity of sycamore trees that grew there. Big Darby’s name is Crawfish Creek…It was named Big Darby by the white surveyors who named it after an Indian of that name who they found living on it near its mouth…” (Ibid, 108)

Elsewhere, Alder tells of losing his thousand-acre homestead and how it was divided up into hundred-acre plots for the new owner’s children (Ibid, 142). Over time, the vast tracts of land that comprised the Old Northwest Territory suffered the same fate.

Our Dependence on Place Names

Today, traditional black powder hunters consider themselves lucky if they can engage in a simple pursuit on forty acres. If one’s moccasins trod a piece of ground for any length of time, certain places take on special meanings, just as they did for our 18th-century hunter heroes.

Place names anchor a tale to the land, whether it be told around a crackling campfire or scribbled on a journal page. The hunter’s personal relationship with a given place stirs golden memories, churns up harsh lessons, learned through a harrowing calamity, or elicits no feelings at all, other than a remembrance of passing close by.  Place names mark seasonal changes, the coming and going of game, or a noted natural feature.

The “big swamp,” “the tiny creek,” “the watering hole,” “the hog-backed ridge,” “the upper trail,” “the wallow,” “the old apple tree,” and two cedars, one with its dead branches hacked away all create reference points as solid as the surveyor’s blaze. That April morning’s tale can be related without such ties to the land, but in the future, perhaps others, my grandchildren I hope, might wish to retrace my footfalls as they seek to understand who granddad was and what he was about. 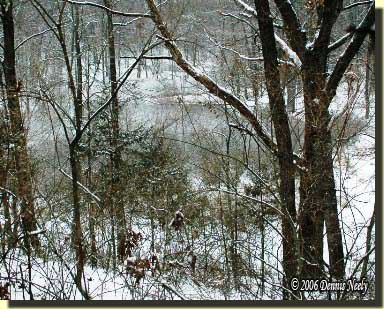 My stories are filled with place names, just as Jonathan Alder or John Tanner or Meshach Browning’s exploits are. I don’t give the names a second thought; to me they represent fifty years of familiarity. A few years ago I started adding the names to the North-Forty’s natural features map at my son-in-laws’ request. Some of the place names made sense to them, like the “north or south islands,” “the narrows,” and “the white oak island.” “The yellow tree,” “fox hill,” and “Fred’s woods” took some explaining.

A few years ago, Andrew downed a fine doe that made it into heavy cover. He plunged in after the deer, and as he started dragging her out, he commented, “This is the nastiest place I’ve ever been.”

“There’s a reason this is called the ‘nasty thicket,’” I said, trying to stifle a laugh.

In Delineations of American Scenery and Character, John James Audubon wrote of spending a night with Daniel Boone. “Colonel Boon” recounted how he was captured by Indians one night, taken to their camp, a few miles away, and how he made his escape.

“But, Sir, I felt determined to mark the spot, and walking to a thrifty ash sapling, I cut out of it three large chips, and ran off…” (Audubon, 113)

Boone continued by telling how, twenty years later, he was called upon to assist in verifying a land claim near the Green River in Kentucky.

“…[he] took for one of his corners the very Ash tree on which I had made my mark, and finished his survey of some thousands of acres, beginning, as it expressed in the deed, ‘at an Ash marked by three distinct notches of the tomahawk of a white man.’” (Ibid, 114)

The gentleman learned of Boone’s escape and that the famous woodsman marked the tree. He wrote to Boone and offered to pay all of his expenses in hopes he might be able to locate the marked ash tree.

“After some conversation, the affair with the Indians came to my recollection. I considered for a while, and began to think that after all I could find the very spot, as well as the tree, if it was yet standing…On approaching the place, I felt as if the Indians were there still, and as if I was still a prisoner among them.” (Ibid)

The pair camped for the night, and the next morning, feeling he needed witnesses, the gentleman left Boone at a promising ash.

“[He] returned, accompanied by three gentlemen. They looked upon me as if I had been Washington himself, and walked to the Ash tree, which I now called my own, as if in quest of a long lost treasure. I took an axe from one of them, and cut a few chips off the bark. Still no signs were to be seen. So I cut again until I thought it was time to be cautious, and I scraped and worked away with my butcher knife, until I did come to where my tomahawk had left an impression in the wood. We now went regularly to work, and scraped at the tree with care, until three hacks as plain as any three notches ever were, could be seen…” (Ibid, 115)

Perhaps twenty years from now my grandchildren will ask me to show them where I sat when I wrote that journal entry, perhaps…