Tiny waves raced to the puddle’s shore. A southwest wind dislodged another drop from a nearby maple branch. More waves followed the little splash in a puddle no bigger than a nice buck’s bed. Catkins hung from a poplar tree. The young doe watched me, but showed no alarm.  A robin flew by, but didn’t linger. A crimson cardinal perched on a crooked witch hazel branch, a dozen paces distant.

Not long before, my moccasins eased up a rise. I saw the doe’s ear twitch. When her head turned to the river bottom, I treed behind a red oak. Over the course of a few minutes, I counted five deer, lying along the ridge. I advanced a step, then stood motionless. I took another step, then another and another. I leaned against the next oak and decided to go no farther.

In due time, I knelt, slipped the bedroll from my shoulders and positioned it in front of the trunk. I sat for a while before pulling out my journal. I moved slow, expecting the closest doe would surely see me. It took her a while. The third one back seemed most concerned.

“Despite the cold, mouse-ear-sized leaves dot some branches in the underbrush,” I scribbled. “Rained hard last night and up until daybreak…turkey scouting is stalled…now see seven deer bedded upwind…no gobbles or clucks.”

A cottontail rabbit hopped from beneath a green juniper bush. The rabbit’s big brown eye surveyed the wet leaves and the traditional woodsman propped against the tree. It sat still while I recorded its presence. When the geese started honking from the River Raisin’s sand flats, its hind quarters tensed. A wood duck hen zipped through the bare trees, weaving in and out. The brilliant colored drake followed some distance behind, and that is when the rabbit bounded back to the juniper’s safety.

I returned to the journal, and wrote: “Who am I?” at the top of a folded page. “What is my given name? My Indian name? When was I born? How old am I now? When was I captured and how long did I live among the Potawatomi, or was it Ojibwa…”

A persona is an integral part of any traditional black powder hunt. One’s “character,” or “alter ego,” can be simple or elaborate, based on a real person’s life or a composite of like individuals from long ago. I view a persona as a “vessel” in which one collects and assimilates historical information for purposes of re-living 18th-century hunting exploits. I usually refer to this vessel as the “historical me.”

For the most part, a traditional hunter’s portrayal is first-person, meaning the participant speaks of the past in the present tense (“I did…”), because he or she actually lives the fair-chase circumstances he or she relates (Roth, 183). I consider this a unique aspect of our living history genre. A large portion of re-enactors present in the third-person, describing a given event in the past tense (“they did…”), referring to the past as the past, often demonstrating as “this is how it was done.”

On that rainy April scout, I chose to stop and watch the deer, rather than spook them and continue on with my sojourn. That decision changed the mental tone of the outing, shifting the emphasis to learning, observing and reflecting. But as I started recording the sights, sounds, smells and feeling of the glade at that moment, my mind wandered to my current project: the creation of a new persona based on the Indian captive narratives I have been researching.

Given the chance to just sit and reflect, my head fills with questions, some dependent on the answers to others. It is possible to assemble a meaningful persona that is summed up in a few sentences; I know many traditional hunters who have succeeded following this form. But having read and re-read the personal tales of John Tanner, Jonathan Alder, Charles Johnston, John Slover, Alexander Henry, Elias Darnell and a host of others, I want to be able to bring this new character to life around any a campfire, in any setting. This task is immense and weighs heavy on my mind.

“The first-person interpreter [she’s talking about museum presentations] must portray a character—fictional, real or a combination of both—with depth, validity and a wide range of knowledge that pertains to his or her world…A well-developed character has a relationship to other characters and economic, social, political and physical forces.” (Ibid, 59) 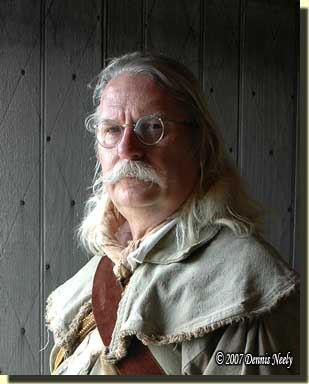 As I sat there watching the does and listening to the geese, I attempted to address the personal side of my new character when I wrote, “Who am I.”

The evening before, a question arose while reading excerpts from Elias Darnell’s journal (Drimmer, 256). In the course of chasing down an answer, I found myself thumbing through the first few sentences of John Tanner’s narrative:

“The earliest event of my life, which I can distinctly remember, is the death of my mother. This happened when I was two years old, and many of the attending circumstances made so deep an impression, that they are still fresh in my memory. I cannot recollect the name of the settlement at which we lived, but I have since learned it was on the Kentucky River, at a considerable distance from the Ohio…” (Tanner, 1)

Curiosity got the best of me. I grabbed Jonathan Alder’s captive narrative from the bookshelf, turned to the first page, and read:

“A history of the life and captivity by the Indians of Jonathan Alder, who was born the son of Bartholomew and Hanna Alder on September 17, 1775, in the state of Maryland, not far from Philadelphia. When I was two years old, my family removed from there to Wythe County in Virginia. About four years afterwards, my father died, leaving a wife and five children…My father had bought a piece of land and had made some improvements before he died, and had some horses and cattle and other stock…” (Alder, 29)

As I compared the two beginnings, I thought of Ed Osmar and his response when I posed the question: “Who are you?”

“We live at Fort Detroit. My wife is English. I ended up buying her from the Indians that captured her. I found out she was Catholic. I was Catholic, so I married her.

“Pontiac was going to attack the fort. He went into the fort with a wampum belt. If he turned the belt one way, it was a signal to the Indians they would attack, and if he turned it the other way they wouldn’t. The fort’s commander got wind of the plan and armed his men so Pontiac and his warriors left.

“When he came back the next day, the commander locked the fort’s gate. Pontiac killed a British woman and her two children who were outside the fort. They were our neighbors. He said he’d kill any English he found so my wife Emily and I grabbed what we could carry and ran away. My wife is blind. She got real sick and almost died. She recovered, but lost her sight to the sickness. We’ve been hiding ever since we left Detroit…” (Rabbit River, 2011)

As I said, I want to be able to bring my new persona to life in any situation, should someone ask me “Who are you?”

2 Responses to Who Are You?