Posted on May 2, 2013 by Dennis Neely: Traditional Woodsman 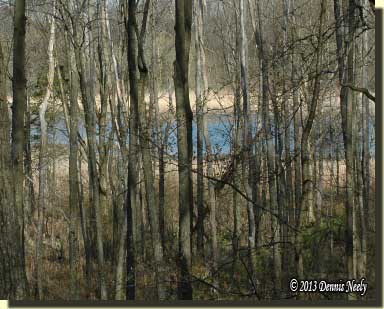 The River Raisin beckons. To the south, the flooded ribbon looks silvery blue, to the north a dull, brownish gray. The broad lily-pad flats seem the dividing line. The air smells of spring’s greening, fresh, clean and leafy. A red-tailed hawk screeches overhead, displaced from its twiggy nest in a towering white oak by a scruffy interloper. The year is 1795, deep in the Old Northwest Territory.

I feel a burning desire to race to the river’s edge, but water stands everywhere in the bottoms. My moccasins are old and tattered. I know the mud is thick and slimy, the trek difficult. I want to see the river, to stand on the bank and watch the brisk current, to see the brittle cattails sway in the wind. The Raisin holds a special place in my heart, and yet, I understand it is not to be, today, at least.

A goose honks at the sandy bend, overwhelming the songs of dozens of song birds. The red-tailed hawk circled back. It flaps away, seeing that I am still here, I suppose. Glossy, ankle-high skunk cabbage leaves carpet the muddy bottom. In a few days’ time they will grow knee deep and squeak when I push through them, if time allows. But I must turn away and continue scouting for turkeys.

Ahead, the green umbrellas of emerging trilliums stand guard ‘round a weathered old log. They were not visible two days ago. Wood ducks whistle behind me, and I see them zigging and zagging in and out of the hardwoods. I wonder if it is the same pair from last time, when I sat and watched the bedded deer?

Ah, ruffled leaves, partway down the hill. Turkeys foraged this way, one or two, maybe more, here and there. From the scratch marks and fresh look of the leaves, yesterday afternoon? My mind suggests I sit, and this time I shall listen. The brilliant sun feels warm, the oak’s bark rough and furrowed.

Crows caw to the east. Their calls sound deep and raspy. More join in, but they are staying in one place, not milling in a frenzied melee. One, two knolls distant a deer’s tail wags side to side on a winter doe trail. It is walking away, not coming closer. Little bugs are flying about, not mosquitoes, but smaller, more fairy-like. I see them in the sun streaks, but they disappear in the shadows.

Since coming into the hardwoods, I have heard nary a putt or cluck, not even a soft pop or click. The birds are here, I can sense it. I need to be patient, to lean back and wait a while…

I find it hard to keep up with 18th-century research, let alone modern issues in the outdoor world. There simply is not enough free time to cover it all, and I my case, the historical research gets top priority. That said, I feel it is important to keep abreast of modern happenings, even if I have to force myself, especially in light of the current anti-gun, anti-hunting sentiment that is being touted by so many of our supposed leaders.

A few days ago I was skimming through the Outdoor Hub and came upon an article posted by Daniel Xu, “States Consider Removing Sunday Hunting Bans.” The article caught my eye for a number of reasons, but mostly because it triggered an association between “Sunday hunting,” and a short passage in Doddridge:

“Many of the hunters rested from their labors on the Sabbath day, some from a motive of piety; others said that whenever they hunted on Sunday they were sure to have bad luck all the rest of the week.” (Doddridge, 101)

Certainly, this passage opens the door for a lengthy discussion, both of God-fearing Christian beliefs and a host of superstitions that were prevalent up through the 19th century (and today, for that matter). Instead, I wish to point out that a traditional black powder hunter might consider incorporating personal beliefs, religious or superstitious, in his or her portrayal. 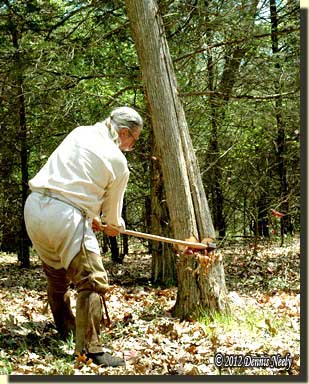 Knowledge of the Sabbath’s significance was common in the backcountry. About 1790, when Jonathan Alder, an adopted white captive, was sixteen years old, he reluctantly joined an Indian raiding party that ventured into Kentucky to steal horses.

“…The next day, in the forenoon we came to the settlement. We could hear the axes chopping at many houses. The leader of our raiding party said, ‘Tomorrow is the day. They are all now chopping wood for the Sabbath, which is tomorrow. Their horses are all turned out and in the morning, the men will all be inside about the house.’ The whites were not out working the following day, and so we gathered up thirty-two of their horses…” (Alder, 81)

In his narrative, James Smith, mentions keeping his “books” in a pouch. The books included a copy of Russel’s Seven Sermons and a Bible.

“When I came into my longings I saw Russel’s Seven Sermons, which they had brought from the field of battle, which a Frenchman made a present of to me…” (Smith, 26)

“During his [Arthur Campbell] stay at Sunyendeand he borrowed my Bible, and made some pertinent remarks on what he had read…” (Ibid, 64)

Based partly on this passage, I carry a small copy of the New Testament, protected by a buckskin pouch and hand-sewn linen envelop, in my hunting bag. A brown ribbon marks the end of Matthew’s Chapter 6, one of my favorite passages, often referred to as the “lilies of the field” from the Sermon on the Mount:

Shortly after mentioning his Bible, Smith tells of a time of plenty. With a few simple sentences, he shows how his personal beliefs were ingrained into his being.

“…When we could have plenty of green corn, or roasting-ears, the hunters became lazy, and spent their time as already mentioned, in singing and dancing &c. They appeared to be fulfilling the scriptures beyond those who profess to believe them, in that of taking no thought of to-morrow; and also in living in love, peace and friendship together, without disputes. In this respect, they shame those who profess Christianity.” (Smith, 65)

And with a little research, other options exist, as well. The important factor in most narratives is how seamlessly the personal beliefs are incorporated into the telling of the tale. For traditional black powder hunters attempting to achieve a meaningful portrayal, this can be challenging task. At first, some forethought might be needed, and maybe a little practice. But personal belief systems are an integral part of who we are in modern life, just as they should be in our alter egos.  Take, for example, Nicholas Cresswell who tells of being ambushed by Indians while on the Ohio River, not far from the mouth of the Sioto [sic] River.

“…saw 4 Canoes full of Indians about two hundred yards ahead of us, upon which we pushed for the shore, but to our great surprise saw six other Canoes full of Indians betwixt us and the shore so that we were entirely surrounded…Out of twelve Guns five were rendered unfit for present use by the wet, mine happened to be in good order and I loaded her with an ounce bullet and seven swan shot. The command of our Canoes was given to me. We had only two Guns on board fit for use, Mr. Tilling’s and mine. Tom O’Brien in the scuffle let his fall in the River and got filled with water. He laid down in the bottom of the Canoe, begun to tell his beads and prayed and howled in Irish. Boassier’s Gun was wet and unfit for use. He followed O’Brien’s example. Weeping, praying, said Ave Mary’s in abundance, at the same time hugging a little wooden crucifix he pulled from his bosom most heartily…” (Cresswell, 91 – 92)

In my younger years, I often would forgo church during deer season. I was afraid fine buck might present itself in my absence. When my tastes turned to the old ways, I discovered the “Sabbath passage” in Doddridge and that got me to thinking. I realized that I rarely found success on Sunday hunts, and my habit changed. Most Sundays I was still in the woods at dawn, but I was out, cleaned up and sitting in a pew before the organist started the first hymn. I don’t feel I missed anything along the way.

See you in church on Sunday, be safe and may God bless you.

One Response to “Wait a while…”