The Wisdom of Our Ancestors

In my disgust, I began the all too familiar litany of “I should haves.” Tami tried to calm my self-incrimination. I finally shrugged, accepting the conditions the new day offered. Yet, I wondered if I would face an unpleasant, albeit period-correct, task—drying out my trade goods—when the sun did come out.

As I shaved, I found myself chuckling. I thought of Duncan M’Gillivray, the young clerk for the North West Company, and how, in 1794, one of my favorite years to visit, the company of canoes he was with had to stop and dry out their goods:

“At 10 O’clock all of the Canoes being about 60 went off to choose a convenient place to dry the Goods, which the late rains have entirely soaked through.” (M’Gillivray, 10)

There are numerous other instances of stopping to dry goods, but this is the one that came to mind. The fault was my own, pure and simple. We got in late from the Woods-N-Water News Outdoor Weekend at the Eastern Michigan Fairgrounds in Imlay City, Michigan. The weather report predicted rain starting late the next morning. Being exhausted, I opted to empty the truck early, “before the rain starts.” God had other ideas. 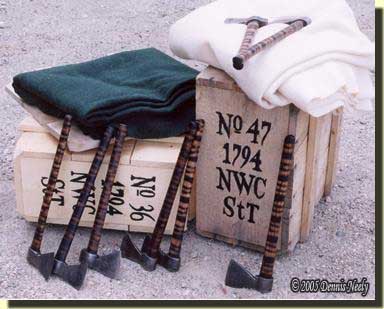 The pelting rain subsided a few minutes before 10 o’clock, but I didn’t feel much kinship with M’Gillivray. My concern focused on a reproduction of “Case No. 47” from an inventory of trade goods allotted to David McCrea. In 1777, at Fort Michilimackinac, William and John Kay outfitted a Montreal canoe (about forty-feet long) for McCrea’s account. The manifest contained fifty numbered bales, barrels, cases and sacks. Case No. 47 held “24 half axes, 24 Tomahawks, 3 Large axes, and 7 Tranches [cutting knife].” (Armour & Widder, At the Crossroads…, 198-206)

I made the case some years ago, along with Case No. 36, which contained “84 lb Castile Soap.” On a visit to Fort Michilimackinac the summer before, a lone, weathered-gray crate caught my attention. The artifact looked out of place, sitting off by itself in a corner of the fort, close to the French Chimney. I took several photos of the crate and recorded its dimensions. As I walked around the orphaned wooden box, I came to realize it covered some 21st-century outcropping that could not be avoided. With my curiosity tweaked, I kept my eye out for other crates, and to my delight found many, all looking similar in design: six rough boards fastened together with wrought nails and banded with wooden, external cleats. 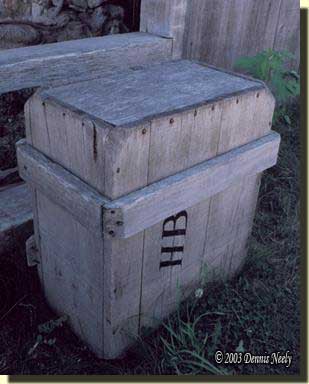 I spent a fair amount of time trying to find primary documentation to corroborate this design, but that search proved fruitless. As a last resort, I contacted the Curator of Collections for the Mackinac State Historical Parks, Steven Brisson. I eventually learned that the pattern was adopted many years before, based on what seemed to be secondary sources. Much to Mr. Brisson’s frustration, the individuals in charge of researching, documenting and constructing the cases had since retired, and the documentation relied on was no longer available. I got the same story from two other historical sites that copied their crates from those at the Michigan fort.

I have yet to uncover rock-solid primary documentation or specifications for the crate/case construction, but the circumstantial evidence indicates the pattern was simply the accepted method of durable packaging in the 18th century. If anyone has primary source material, please share.

I was satisfied with the end product, but had some reservations about the external cleats, given the lack of 18th-century source material. In addition, case No. 47 looked bright and new, which is how I would expect it to look in Montreal or at Michilimackinac when it was first constructed. But my alter ego was a trader hunting near the headwaters of the River Raisin, not in the pine forest, just outside the fort’s land gate. I reasoned the case should look worn from the trip inland from Frenchtown at the mouth of the River Raisin, to say nothing of the trip to Frenchtown on Lake Erie and points north or east.

To remedy that situation, I left the crate sitting out part of the fall and into the winter, hoping natural exposure to the elements would add a period-correct patina. In a matter of days, the wrought nails rusted and streaked the yellowy-white softwood boards. As the case weathered, I noticed the small spaces between the three top and three bottom boards swelled tight from the constant moisture. After a rainstorm I pulled the lid off and found the inside was dry—the first lesson learned.

A few weeks later, in the middle of October, I decided to lug the crates to the woods. When I put the cases in the truck’s bed, the cleats held the boards up off the bed-liner, just as they would in a canoe. A mental lightning bolt struck; I understood the casual water that always sloshes about in the bottom of my canoe would never touch the crate proper, let alone its precious cargo—the second lesson learned.

At first I didn’t give much thought to transporting the crates from the Dodge to the wedge tent, which almost turned into a huge, wilderness-classroom error. I had it in my mind that I would just pick up each crate and carry it to the duck camp. A second lightning bolt hit as I crossed the sand bridge in the North-Forty: “carrying them isn’t very period-correct.” I parked two ridges and a valley from the duck camp, and when I gazed at the white canvas tent sitting alone on the hill, I muttered something like: “what the heck, let’s portage them.” 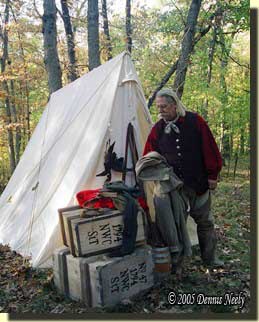 I unbound the bedroll and tied the portage collar’s eight-foot leather tails around the crate, knelt down and hefted the first crate onto my back. Not wishing to injure my neck, I positioned the wide strap around my upper shoulders, and quickly learned the external cleats helped keep the leather tails from slipping. When I eased the smaller, Case No. 36 onto No. 47, the cleats “locked together” with a slight offset to the crates’ sides—lessons three and four.

The two crates are now nine-years old, as it turns out, almost to the day. At the various outdoor shows, the crates give a fair representation of the Great-Lakes, fur-trade era and often form a focal point for questions, especially among younger guests.

When traveling to and from a show venue, I pack each crate with an assortment of trade goods, from brass kettles to tanned peltry for display. Being a creature of habit, I tend to pack the same items in each crate. For a while, I wrestled the loaded crates onto a dolly and wheeled them into the show hall—they were all I could lift. About five years ago, I started unloading part of the plunder before lifting each crate—that took more time, but was easier on an aging back.

At one of the shows, a volunteer helper commented: “these must weigh a hundred pounds each.” Of course I started into my spiel about how original “pieces,” as the bales, cases and sacks were called, each weighed 90 pounds. Yup, the light went on again, and when weighed, case No. 47 was 85 pounds. The contents change the weight with all hides tallying somewhat lighter than tomahawk heads and copper kettles, but the physical volume of that crate seems best suited to handle 80 to 90 pounds—another lesson learned.

And as I should have expected, when I opened the crate on Monday, I found only a few droplets of water on the large beaver hide and my winter moccasins, everything else was dry. We recorded almost an inch of rain overnight, and by design, the gaps in the top boards swelled shut again, but such is the wisdom of our ancestors.

One Response to The Wisdom of Our Ancestors