A bawl-mouthed Walker bayed. Crisy’s distinctive “awoo, awoo, awoo, awoo…” spurred a sense of urgency, tugging my buffalo-hide moccasins due south from the wagon trail. The light, fluffy overnight snow poofed with each footfall; the under layer crunched. A stiff breeze died just over the ridge, where the hardwoods eased into a thick, white cedar swamp. I continued on, despite breaking through the ice that hid the many tiny puddles that lurked among the tangled roots. 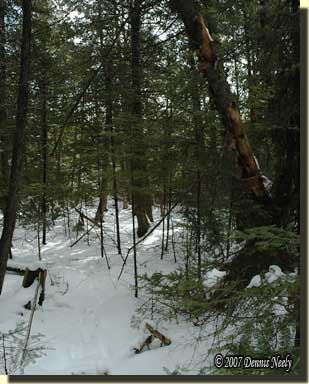 A Plott’s lower tones joined Crisy’s; the pair sounded louder and closer. The morning’s cold bit my nostrils and tingled my fingertips. I stopped and leaned against a gray-barked cedar to listen. The hounds pushed easterly, then hushed. The forest’s stillness hugged my being. A sense of calm mingled with peaceful contentment. Snowflakes drifted in and out of the sun streaks. I could almost hear them whoosh side-to-side.

The hounds’ baying swung in a large, looping arc that turned west. At first, I thought they might circle behind me and hug the swamp’s edge, but as they approached, it became evident the bobcat was in front of me. It made little difference, because the swamp was so thick I could barely see beyond “Old Turkey Feathers’” effective distance for buckshot. From the sounds, Crisy and Zoe passed forty or so paces out. I never saw them.

The hounds chased the old male bobcat by two more times, and all three times the barking hung up to the southwest. With the baying a mile or so distant, my woodland companion, Randy Waites, suggested we move closer to the place where the dogs lingered. Being familiar with this plot of ground, Randy said it would be best to cross the little creek that I heard babbling not far to the west.

Here and there fallen logs bridged the creek. From the tracks, Randy had crossed over and back once before that morning, scouting the cat’s trail. The log was a foot or so thick with a nasty crook, halfway across. Randy went first, which only served to pack the fresh snow into an icier mess. I looked up and down the creek for a better choice, but found none.

Envisioning each moccasin step, I decided to lead with my right foot, but at the crook, my left was ahead. For the next step, my right leg would have to cross over my left, and I figured that was not going to work. To remedy the situation, I put my feet together and shifted my weight with the idea of moving my left leg next. The smooth-soled, buffalo-hide moccasin slipped and my left foot splashed down in the sandy-bottomed creek.

I pitched forward. I pushed “Old Turkey Feathers” down and away. The forestock came to rest on the log with my left foot under water, saving a fall. I felt a cold, slow trickle sneak under the moccasin’s tight-tied buckskin flap.

“Pull your foot out!” Randy’s yelp echoed in the forest.

“No,” I said in a quiet, controlled tone, knowing that to pull my left leg up all but guaranteed an instant dunking.

“You’ll get soaked. Your moccasin’s under water.”

I did not answer, but rather concentrated on keeping my balance as I lifted my left foot clear. Water beaded on the leather upper and damped the hunt-stained leather leggin. Once back up, the last few steps were easy. Glancing ahead, I saw Randy sitting on the snow, unlacing his right hunting boot.

“What are you doing?”

“I have two pair of insulated socks, and I’m going to give you one,” he said.

“No need,” I said, pulling the buckskin leggin up. “The moccasin flap is tied tight around my ankle, and what little water got in will be wicked away by the wool liner. Lace your boot up.”

As we moved nearer a big deadfall, I explained to Randy that the old woodsmen depended on natural fibers for their clothing and comfort. We hadn’t traveled more than sixty yards before he asked how my foot was doing. I told him the left felt a bit warmer than the right. He seemed surprised.

In a while, the bobcat led Crisy and Zoe back around our way. Instead of running up the big angled cedar and taunting the hounds, the bobcat chose the swamp’s edge. About ten minutes later, Randy’s radio squelched and the head dog handler, Doug Agren, told him they planned to switch out the dogs and put an old timer, Fred, on the trail.

Randy radioed back that that was fine, and that the cat had changed course. He said we’d be moving out a ways. Then a broad smile appeared and Randy said, “And by the way, Denny’s been baptized in the creek.”

A long pause followed, and then a concerned Doug asked if they needed to send someone “to help him get out.”

I scowled as Randy assured him I was just fine. “Actually, it’s a little scary. He’s a tough old mountain man (we had a talk about personae and time periods afterwards) and I’m afraid he’s not coming out until he kills a bobcat. We could have a problem at dark.” Randy was laughing and shaking his head. “Yup, you’ve been baptized.” 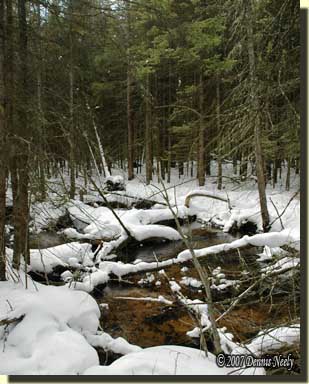 The picture of that little creek is a favorite in my photo album. It draws many questions at the various outdoor shows where we set up a demonstration camp, mostly because there isn’t a traditional woodsman in the picture. It is simply a pleasing landscape that generates curiosity. When I posted that image on “Snapshot Saturday,” it drew a number of comments and generated several emails.

I often use the “bobcat dunking” story to illustrate the versatility and warmth of the natural fibers and how the clothing served our forefathers well. The tale also acts as a focal point for comparing and contrasting modern hunting clothes with those of our hunter heroes. And many times, today’s hunters walk away with a better understanding of possible options for keeping warm during a harsh, Great-Lakes winter outing.

During the morning, my moccasins kept breaking through the ice on the water collected between the cedar trees’ roots. That is a common occurrence, and one that I rarely give a second thought to. If water happens to get past the tied flaps, the wool wicks it away, as I told Randy. That is not to say that I am not cautious about getting soaked, but only that I don’t obsess about keeping dry at all costs.

And to be sure, there are many historical references to getting wet and suffering hypothermia, or just plain succumbing to the cold. Perhaps one of the most telling is in the journal of John Tanner:

“…we came to a small creek of salt water, and on the summit of a little hill by the side of it, we saw a man sitting. We went up to him, but he gave no answer to our questions. We then took hold and tried to rouse him by shaking, but we found him stiffened by the cold, and when we took our hands off him, he tumbled to the ground as if he had been frozen entirely stiff…We tried all the means in our power to resuscitate him, but all in vain…” (Tanner, 80)

Like many of the old journals, Tanner mentions stripping off moccasins and leggins when encountering a stream or creek, and there is no pressing need for an immediate crossing. Yet, he spoke of the rigid protocol followed in the initiation of young warriors:

“…They must, if possible, avoid wetting their feet, but if they are ever compelled to wade through a swamp, or to cross a stream, they must keep their clothes dry, and whip their legs with bushes or grass when they come out of the water…” (Ibid, 109)

Like Tanner, Meshach Browning seems to emphasize the importance of the situation’s urgency. Caught up the midst of a winter chase, Browning discovered snow wet his priming. Wishing to finish off “a large buck,” the valiant woodsman waded into a creek of unknown size:

“…while the faithful dog was holding the buck by the nose, I drew my hunting-knife from  my belt and made a desperate pitch at the heart of the infuriated beast, which laid him out dead in the creek…My friend and myself were both wet to the knees…” (Browning, 29)

Again, in late fall, Browning is confronted with a river crossing, but follows a different course, dictated by ample time.

“On the morning when the first snow fell that season, I rose early, intending to hunt on the west side of the Great Yough river. I went to the river, which, being pretty well up, the water reached about half-way up my thigh. I took off my pants and moccasins, waded over, and after again putting on my clothes, I felt first-rate… (Ibid, 250)

On the one hand, I find Browning’s last comment, “I felt first-rate,” interesting. It sounds like the early-morning dip left the famed woodsman invigorated. On the other hand, his assessment doesn’t surprise me, because I understand the physical sensations associated with that experience. In essence, the creek dunking on the bobcat hunt is period-correct, a key to the past and a point of kinship shared with more than one hunter hero.

4 Responses to “Denny’s Been Baptized…”