Crows cawed to the west; Sandhill cranes chortled to the east. A robin sang “Cheeri-leee, cheeri-leee,” near where the cedar grove meets the meadow grasses. Not long after first-light a wild turkey hen clucked to the north and a bit later, a blue jay uttered a soft, contented string of “jaaays” off to the south.

Through the four-year absence, the underbrush grew thicker at the gravely mouth of the big gully. Tall, arching branches of flourishing autumn olive bushes draped over what once were long, narrow openings between old red cedar trees. Some of the invasive autumn olives still sported an abundance of light-green, fish-shaped leaves, while others stood almost barren, encircled by a faded-yellow carpet of fall’s castoffs.

“I don’t believe this,” Tami whispered, “but it’s been a while, hasn’t it? I hear something straight out.” I listened and didn’t answer.

An hour or so later, we still-hunted north. Because of her arthritis, Tami had to ascend the gully’s steep slope backwards, using small but sure moccasin steps. We lingered at the crest, scanning the gently rolling hilltop peppered with more red cedars, a few wild cherry trees and an assortment of oaks. Young, dead, barkless cedar trunks, starved of sunlight by the older growth, littered the forest floor.

“Over there,” I said. “See how those trees look like a solid mass? That’s a good spot.” In due course we reached the little sanctuary. I opened Tami’s folding stool and she sat facing west; I sat on the ground, cross-legged, facing east. A hint of breeze came from the southwest, leaving the vast majority of this cedar stand upwind of the makeshift fort.

A fox squirrel left its leafy nest and descended a tall cedar tree headfirst. Its tan underbelly fur did little to hide it. About four trade-gun-lengths up, it stopped, sat on a branch and began an incessant chatter as it flexed its tail now and again as if emphasizing an important point in its discourse.

“I’ve got movement,” Tami whispered in the midst of the fox squirrel’s chuckling. In between the critter’s sharp notes, I heard leaves rustle. I watched my section of the hilltop, but listened to my wife’s. Three or four half-hearted snorts, upwind and back over my right shoulder, marked the deer’s progress. The doe had found our scent trail, laid down not more than ten minutes before.

The snorts continued for a couple of minutes, not the hard, warning blow of a frightened whitetail, but more on the dainty side, intended to force a suspected interloper to move and show him or herself.

I next heard the scratches of the fox squirrel running on an oak branch, then clawing higher. That oak stood not three paces to Tami’s left. The squirrel climbed up, then scratched its way back down the trunk, coming as close as it dared. Afterward, Tami said it hung upside down and looked straight at her; we both heard the two sharp barks, and we both thought the fox squirrel exclaimed, “Ahh, Haa!” as if it just discovered our presence.

“The doe’s gone,” Tami whispered. “She came straight at me, then angled to my left.”

“No more than fifteen yards,” my wife answered. “She wasn’t concerned about me until she came to where we walked. Hear that?”

The sound came from the tannish leaves under a clumped wild cherry tree. A big doe passed behind the two trunks that shared a common root; the doe’s spring fawn straggled behind. The pair picked their way through the cedar trees at the edge of the meadow. The wind shifted to due south, ruffling the long, white tail hairs of the older deer. They took their time, browsing and nibbling and wandering about. Ten minutes later they slipped into the big hardwoods.

“You can look. They’re over your right shoulder,” I whispered.

“There’s two coming up the hill to join them.”

“You’ve got the advantage,” I whispered. “I can’t see them from the ground.”

A Dose of Measured Compromise

Opening day of Michigan’s firearm deer season is always special, but more so this year because Tami wanted to get out and hunt, too. She’s not into setting an 18th-century date, and she doesn’t cross time’s threshold, at least not consciously. 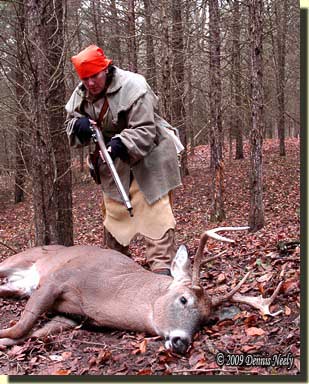 Tami Neely approaching the fine buck she took in 2009.

Arthritis has kept her out of the woods for the past four years. The last time we hunted together she downed a fine buck with her chiefs-grade trade gun. She wanted to “try the same spot” where she got her buck. Had I known that, I would have scouted the ravine before the opener. The rapid growth of the invasive autumn olive bushes disappointed both of us.

We both whispered it was time to move on at the same moment. There is a reason we are married. I suggested a circuitous route to avoid the gully’s steep bank out of concern for her knees. She wouldn’t hear of it, citing the wind and our scent as the governing factor. She took two steps, paused, then turned around and walked up the trail backwards with short baby steps. “It’s easier for me this way,” she said.

Once on the hilltop, she grumbled about lugging the folding stool along, but sighed and said she knew she couldn’t sit on the ground. She draped her blanket over the stool, “So it won’t show in your pictures. I know it’s not traditional.”

“That’s what measured compromise is for,” I said.

Regardless how hard a living historian tries, it is impossible to duplicate a bygone era in every detail. The best we can hope for is to approach as close as is humanly possible to a viable simulation of life in our chosen time period. Sometimes modern circumstances, like bi-lateral knee replacement, impose limitations on a traditional hunter’s attempt at duplicating yesteryear.

When a modern encroachment interferes with historical accuracy, be it new knees, the mandated hunter orange laws or a camo-clad trespasser wandering into an 18th-century station camp, the best approach is to evaluate the infraction and seek a conscious measure of compromise that minimizes the adverse impact. Over the years, I’ve come to call this process simply “measured compromise.”

In reality, we cannot paddle our canoe around the river’s bend, beach it and step back into the past—that is physically impossible. Likewise, living historians are human beings and cannot stop the aging process—that is physically impossible, too. As our bodies age, prudence and “doctors orders” change our outlook on what we can and can’t do. But applying a healthy dose of measured compromise helps the traditional hunter continue his or her time traveling.

Perhaps the biggest single compromise for traditional hunters over the age of forty is footwear. The need for orthotic shoes and elk center-seamed moccasins don’t mix; and under inclement weather conditions, aging bones, wet snow and smooth-soled mocs compound the problem. Unfortunately, too many traditional hunters give up the simple pursuit, rather than accept a reasonable compromise, often because they do not see “any other way.”

In such situations, continued good health and personal safety afield overrule authenticity. After all, this is a hobby and the idea is to have fun while learning. Like dealing with hunter orange, the remedy is a mental attitude that “wills invisible” the offensive intrusion by concentrating on what belongs in the historical scenario while ignoring what does not—in essence, seeing “what was,” not “what is.”

And the second biggest compromise is hunting from a stool, chair or other contrivance that eases stress on the legs and lower back. Sitting on a downed log, a stump or rock might work in some locations, but that limits mobility and choice of ambush—a limitation many folks are not willing to make. Tami is one of those people. For her, the folding stool is the best form of measured compromise, because it allows her to return to the glade in a traditional style, picking and choosing ambush sites on her terms.

In the end, to fuss about a modern imposition and know that “it is not traditional” is one thing; to foster a keen mental attitude that applies a dash of measured compromise and wills the transgression invisible is entirely different.

Apply a dash of measured compromise and get in the woods, be safe and may God bless you.

4 Responses to “…it’s not traditional”