A chickadee bobbed up and down on a flimsy sprig. The little songster turned its head side to side, trying to make sense of the motionless woodsman, not two trade gun lengths distant. Two or three more chickadees flitted by, but this one lingered. A snowflake or two landed on the black feathers that adorned the little bird’s head. Then, its curiosity satisfied, the tiny wilderness tenant moved on. The woodsman’s buffalo-hide moccasins moved on, too.

An inch or so of fluffy snow carpeted the doe trail. Four sets of tracks ruffled the leaves that covered this upper trail. The bigger tracks, typical of mature does were missing, and the still-hunt never produced a buck’s spread-toe track. The mid-hill trail showed similar scanty use. The majority of older deer were gone, killed by disease the year before.

At a break in the cedar trees, fresh turkey tracks crossed the trail, heading west. I counted nine birds in that flock. To the left, a plump fox squirrel rumpled leaves in a young white oak. The sound seemed loud in the late-afternoon quiet. With its mouth full, the squirrel ran up a slender branch, jumped to a tall red oak, climbed high and made a bit of a commotion as it added more insulation to its winter abode.

The day’s fruitless hunt weighed heavy on my bones. Up ahead, a large cedar tree waited; years ago a belt ax carved a makeshift hole in the tree’s thick dead branches. That was a mid-December pursuit, too. At the time, three thawed depressions in the snow about that tree attracted my attention. Two faced north, rumps to the wind; the third faced south.

Pulling the crimson trade blanket tight about my hips, I sat, content to “sit back and enjoy the evening,” as I soon scribbled on a journal page. A light, sugar snow began falling. The forest grew quieter. The lead holder ceased recording the details of that day’s simple pursuit. A tranquil solitude overtook my soul. I slipped into silent prayer, offering God thanks for the joys and frustrations of the fall hunts.

Big wings thrashed as a wild turkey flew up to its night roost, down the hill and off to the north beside the huckleberry swamp. I chuckled, thinking that perhaps God was treating me to the ethereal sound of angel wings. In all, nine angels ascended.

But, in the midst of waiting for the birds to fly up, the notion turned from humorous to troubling. I knew the new historical me did not have a copy of the New Testament on his person. I felt a compelling, unfulfilled desire to return to the Gospel of Luke and read about the shepherds and the coming of the angel and the tidings of great joy…

I approached this fall’s hunting seasons caught up in the exuberance of a new persona: that of an older white man captured in his youth, adopted and raised in an Ojibwa family, who finds it hard to let go of his Ojibwa upbringing later in life when he returns to white society. This version of the historical me is still in its infancy, still just learning to crawl, but each trip to the forest breathes additional life into the portrayal.

I chose to start out with what I had and build from there, knowing that the early stages of this portrayal, especially the illustrative record, would be crude and miss the benchmark of an authentic representation by quite a bit. In essence, I found myself back at the point of my beginnings, taking my own advice to “just get out there and do it.”

But divorcing one’s self from a persona that developed over thirty years is hard. The task is made doubly difficult when one must use some of the clothing from the older persona to give the new one a place to start—no one likes hand me downs.

To compound the frustration, most of the captive narratives include an adoption ceremony where the adoptee is cleansed of his or her “white blood” through a thorough scrubbing in the local river or creek and given a new set of clothes, symbolizing the birth of a new family member. But to follow this model it would take at least another year to assemble the period-correct clothing and accoutrements, and I feared that if I didn’t embark this fall it would not happen. Perhaps that was impetuous of me.

When creating a new persona, the living historian must depend on his or her primary research, make a choice and implement that choice within the portrayal. One of the most difficult decisions was to leave my copy of the New Testament home. I’ve hunted all fall without it, and frankly, that choice did not seem right. However, I accepted it as part of the divorcing process, a part of the necessary separation between multiple historical hunting personas.

A few days ago I was rummaging through James Smith’s captive narrative for clues regarding split pouches when I accidentally tore the corner of the paper that covered my Christmas gift:

“When I came into my longings I saw Russel’s Seven Sermons, which they had brought from the field of battle, which a Frenchman made a present of to me…” (Smith, 26)

At that moment the entire complexion of the evening’s research changed, and being the bumbling, inquisitive kid that I am, the paper tore some more. Really, it was an accident…

“On this route we had no horses with us, and when we started from the town, all the pack I carried was a pouch, containing my books [more than one!], a little dried venison, and my blanket….” (Ibid, 40)

Did you hear the paper tear again? Did you catch a glimpse of a treasure, bright and shiny?

“While we remained here, I left my pouch with my books in camp, wrapt up in my blanket, and went out to hunt chestnuts. On my return to camp my books were missing… (Ibid, 43)

Oh, I was being teased bad…

“They called me by my Indian name, which was Scoouwa, repeatedly. I ran to see what was the matter, they showed me my books, and said they were glad they had been found, for they knew I was grieved at the loss of them…” (Ibid, 54)

And then my Christmas gift fell from the pages…

“…During his stay at Sunyendeand he [Arthur Campbell] borrowed my Bible…” (Ibid, 64)

Needless to say, I laid James Smith’s narrative aside, retrieved my Bible from the bookcase over my desk and allowed my new alter ego a few moments alone with his Christmas gift, delivered on angel’s wings…

“And there were in the same country shepherds, abiding in the field, keeping watch over their flock by night. And, lo, the angel of the Lord came upon them, and the glory of the Lord shone round about them; and they were sore afraid. And the angel said unto them, Fear not: for, behold, I bring you good tidings of great joy, which shall be to all people. For unto you is born this day in the city of David a Savior, which is Christ the Lord…” (New Testament, Luke 2: 8 – 11) 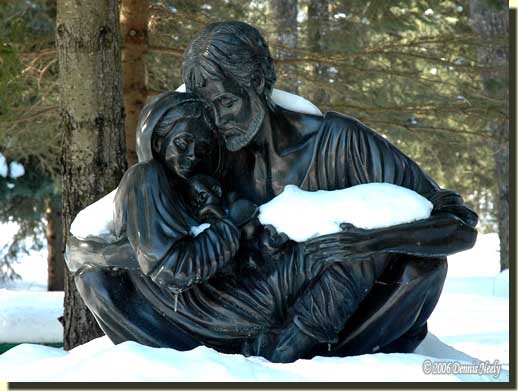 The Holy Family in the pines at The National Shrine of the Cross In The Woods, Indian River, MI.

2 Responses to On Angel’s Wings…