A not-so-distant maple tree popped. The sound echoed in the frigid hardwoods. A red-bellied woodpecker grasped a dead oak, moved about the gray, barkless trunk, but never drummed. Disappointment rushed over me. I associate tapping woodpeckers in a barren forest with popping trees. Yet, the still-hunt continued.

My right buffalo-hide moccasin slipped forward on the brittle leaves that covered the steep hill’s mean slope. I kept my balance.  Ahead, a string of pried up leaves told of a single deer traveling north on a trail that once was as wide as a woodsman’s shoulders, churned up and thick with deer tracks. The upper doe trail was no longer visible, the lower showed signs of two or three deer passing.

The hillside leveled out, then rose a bit. Upturned leaves, angling in from the south, marked the course of a second deer with a shorter stride. When I came to that animal’s path, I leaned against a white oak and pulled the scarlet blanket’s folds tight about my hips with my left hand.

As the deer do, my eyes skimmed the knob’s crest and gazed beyond, out into the River Raisin’s bottom lands. My nose dripped. Faint clouds drifted from my mouth. Ice clung to my mustache whiskers. Behind me another tree popped with a bang reminiscent of a small, half-charged squirrel rifle.

Scraggly juniper bushes dotted the knob’s gently rolling north side. Sedge grass patches, mucky flats with treacherous, moss-covered roots and a tangle of maple and yellow birch saplings strewn with fallen white ash trees offered no sign of movement. I stood until my bare thighs grew cold, then stalked on.

That morning’s still-hunt proceeded up and over another hill, around the tamaracks that grow on a swampy thumb that protrudes into the hardwoods and up the next rise. I paused behind a tall red oak and surveyed the ridge top. Again I pulled the blanket tight about my thighs, but that didn’t seem to quell the chills. Intermittent sunlight bathed the trunk of a nearby oak with a distinct westward slant. A couple of cautious steps later I stood beside that tree. With as little movement as possible, I worked the blanket’s outer fold up over my shoulders, gathered the inner layer about my hips and sat cross-legged with my back against the trunk.

Not a minute later, another tree popped, and like before a woodpecker swooped near. The bird’s tapping seemed half-hearted, falling short of my expectation. I found myself warming in the sunlight, enthralled in my 18th-century Eden as the tarnished brass lead holder raced across the folded page. The lead scribbled “the desolation of December has set in. The air has that dampness to it that gnaws through the trade blanket, biting deep to the bone.”

As I sat huddled in a four-point trade blanket, my mind wandered back to a sweltering June afternoon at a Spring National Shoot at Friendship, Indiana, the home of the National Muzzle Loading Rifle Association. I was talking with Roy “Pa” Keeler at his booth in the sheep sheds, as the commercial row area is called; the conversation centered on traditional black powder hunting, as it most often did with Pa. I asked Pa, “What were you guys thinking when you set the [Michigan] muzzleloading deer season in December?”

Pa’s eyes started to twinkle and that wry smile of his was unmistakable. “You hunt it, don’t you?”

Pa went on to explain that there was a lot of resistance to the idea of a muzzleloader only season, not just at the state level, but among hunters. The bow hunters didn’t want their season interrupted, the firearms deer season dates were set in stone and the only alternative was mid-December, after a respectable hiatus to allow the remaining deer to settle down. Then, in typical Pa Keeler fashion, he looked straight at me and said, “Besides, black powder people are tough. A little bad weather won’t stop us.”

Yet, when I tell this story, I usually note that Pa never said “foolhardy.” He was a huge advocate for safety, and not just on the range or when handling black powder arms, but rather in all aspects of the hobby. When talking with Pa, I always knew “be safe” was implied in his tutelage just as my father always said “be safe” when I headed to the woods—and if he didn’t, you thought it.

In traditional black powder hunting a fine line exists between “tough” and “foolhardy.” I would be less than honest if I did not admit to crossing that line on occasion—sometimes by accident, and sometimes not. But in either case, the result is a better understanding of a traditional woodsman’s personal limitations, a deeper knowledge of the harsh realities of surviving in the wild and the consequences of not living within those limitations.

The Desolation of December

For this traditional woodsman, two different and distinct dates exist for the “start of winter:” the winter solstice, celebrated or despised by 21st-century folks and that point in time when Nature turns harsh and unsympathetic to the forest tenant’s plight.

Fall lingered this year through the end of October, then three windy days the first week of November brought down all of the leaves. Winter’s cold arrived by mid-month, the ground froze and the whitetails began limiting daily movement to conserve fat and precious energy. The entire complexion of the firearm deer season changed to that of the December muzzleloading season.

The popping of the trees is a month earlier, too. When the maple tree popped, I jumped as if startled by a close-by muzzle blast. The echoing sound triggered an unconscious set of woodland expectations that I associate with pursuing smaller game, not whitetails. Those trips afield are usually shorter, governed by the biting cold, not the all-day affairs of chasing deer.

The November hunts grew hard and harsh, compounded by the clothing restrictions of a new persona. I found I had little time to adjust to the fast-falling temperatures, but that is what re-creating life in a bygone era is all about, from the living historian’s perspective. 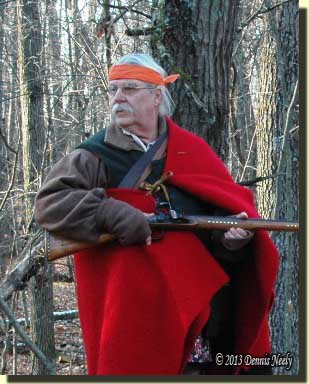 By experimenting in the wilderness classroom, I was able to adjust the way I wore the clothing of a returned captive and adjust hunting techniques to maximize my tolerance of the unseasonable cold. The task was difficult, but with perseverance my alter ego pushed his comfort level from the upper thirties down into the mid-teens in a matter of three weeks.

Twice during the process of acclimating the historical me to Michigan’s unpredictable winters, I crossed the line of human limitation and experienced mild hypothermia. Fortunately I recognized the symptoms early enough to retreat to safety, but not in time to avoid chills throughout the night. Such actions flirt with foolhardy, and yet there is an element of kinship that exists in sharing shivers with the likes of John Tanner, Jonathan Alder and Col. James Smith.

On that particular December still-hunt, the temperature never rose above eighteen degrees. The historical me survived for four hours in the Old Northwest Territory of the 1790s, overlooking the bottom lands of the River Raisin. Wrapped in a scarlet trade blanket, basking in sunlight, a traditional woodsman found time to scribble “the desolation of December has set in.”  As Pa Keeler once said, “black powder people are tough…”

One Response to “Black powder people are tough…”