Ed Schmidt, editor of Whitetales: The Official Publication of the Minnesota Deer Hunters Association, sent me an email the other day. The Minnesota Deer Hunters Association is a grassroots conservation organization dedicated to the betterment of deer, deer habitat and deer hunting in Minnesota. Since 1996, the MDHA has spent over $16.5 million supporting habitat restoration projects with innovative programs such as Hides for Habit, the Food Plot Program and the Conservation Seed Program. 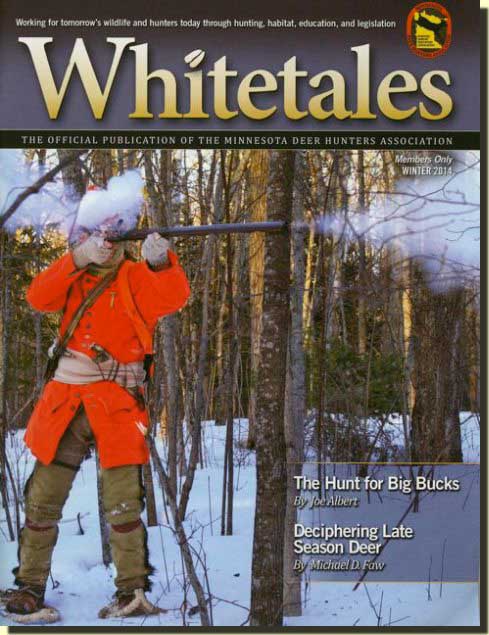 The Winter 2014 cover from Whitetales: The Official Publication of the Minnesota Deer Hunters Association. Used with permission: MDHA.

John’s son took the photo in March of 2013 after a heavy snowfall. Hayes portrays a Virginia hunter/farmer who is “a guide and courier working between the Fairfax grants of Northern Virginia and Western Pennsylvania and New York in the 1760s.”

The Whitetales cover shows John firing an eastern-style, 24-gauge fowler he built from a Chambers kit, complete with inked vines on the stock. The snowshoes are of the Ojibwa pattern and add to the authenticity of his historical impression. The hunt took place in the Sugar Hills area of Itasca County in Minnesota where Hayes has taken 11 white-tailed deer in the last 13 years.

John made the blaze-orange sleeved waistcoat himself and lined the coat with wool for added warmth. In Minnesota, any hunter or trapper in the field during an open deer season must wear blaze orange above the waist, including the hat or cap. It is imperative that all traditional hunters understand and adhere to all game regulations. Applying a healthy dose of measured compromise, Hayes continues to hunt in the style of his ancestors, willing the orange color invisible as far as his historical simulation is concerned. John Hayes started down the traditional black powder hunting path in 1984.

I first met John at an Outdoor Writers Association of America conference. The wool weskit and drop-sleeve shirt he wore were a dead giveaway of his interest in living history. John’s articles appear in a number of publications, including MUZZLELOADER, Muzzle Blasts and Whitetales. In 2006, Hayes published Seven Thought Provoking Essays in Chapter Form On the Subject of Participating in Historical Events and Maintaining Historical Venues in General, which is now available as an E-book on Amazon.com.

The second magazine cover is from the December 2013-January 2014 issue of Outdoors Unlimited: The Voice of the Outdoors, a bimonthly magazine published by the Outdoor Writers Association of America.

The Dec 2013/Jan 2014 cover from Outdoors Unlimited: The Voice of the Outdoors. Used with permission: Outdoor Writers Association of America.

The Outdoors Unlimited cover photo, titled “Next Ridge West,” was taken on a cloudy February squirrel hunt. The morning’s still-hunt reached a crossroads, or better put, crossed oaks. The squirrels were skittish that day, and my alter ego was considering spending an hour or so sitting in the windfall when a fox squirrel barked at the base of the far ridge. “Do I move on, or stay put?” In hindsight I realize that is a recurring question within so many of my 18th-century sojourns.

Kelsey Dayton, Publications Editor for Outdoors Unlimited, said she chose the “Next Ridge West” because it fit December and January outdoor activities.  The unique nature of traditional black powder hunting caught her eye, too. “The hunter looking into the distance shows a mystic, yet universal outdoor moment…with a pop of color that reflects the texture of winter,” Dayton said. I feel flattered by her kind words of encouragement and honored by her choice of cover images.

Having two covers published at the same time in respected national magazines outside the black powder genre is, as Ed Schmidt says, “a cool coincidence.” The images present an opportunity for readers unfamiliar with living history or traditional black powder hunting to reflect on America’s rich hunting heritage. The exposure also offers a chance to promote this wonderful and exciting pastime.

Yet, in a more global sense, the two covers serve as a reminder that each of us who step over time’s threshold in search of a few precious moments shared with our individual hunter heroes must shoulder a small part of the responsibility for forwarding the hobby. The uniqueness of the traditional black powder hunting experience attracts attention, because it is different than today’s mainstream hunting messages.

The task at hand is to increase awareness of the traditional black powder hunting philosophy on a one-on-one personal basis. The vocal, anti-hunting minority advances their cause when we fail to speak up and say “I am a hunter,” and most often, we let that chance slip away in small gatherings of close friends, family and business associates, especially around the holiday season.

Perhaps the uniqueness of traditional hunting holds the key necessary to unlock our lips and thus the minds of others. In the arena of ideas, those of us who favor the simple pursuits of a bygone era are in the best position to defend out great American hunting legacy, because the living historian’s perspective is one of hindsight. For our part, we each need to shoulder our responsibility with courage, step forward and declare “I am a traditional black powder hunter. Let me tell you what that entails…”

Speak out for traditional black powder hunting, be safe and may God bless you.