Blamed for “Disrupting My Hunt”

In the distance, in the muddy bottomlands beside the River Raisin, a tom turkey gobbled for the first time. My fingers dug around in the shot pouch until they felt the single wing bone. I cupped my hands about the round end, angled the bone down a bit and sucked in twice: “Arrkk, arrkk.”

After the old gobbler’s spontaneous response, I returned the wing bone to the pouch, standing it upright against the front seam where it was easily accessible. Out of habit, the Northwest gun’s muzzle eased in the direction of the great white oak that stands at the divide between the hardwoods and the bottoms. On that late April morning, in the Year of our Lord 1795, waiting seemed the best choice.

I listened to the cardinal sing and watched it more than I should have only because it was sitting in line with the last place I heard the tom gobble. I paid little attention to the song sparrows to my right or the fox squirrel scrounging for acorns to my left. Crows screamed from the steep wooded hill on the north side of the Raisin. Now and again a hen mallard squawked where the river turns deep and geese ke-honked from the sand flats.

The long-bearded turkey sounded closer. There was no question he heard the sullen clucks. Experience quelled the urge to reach for the wing bone. I sat back against the thigh-sized main branch, concealed within the broken top’s twiggy web. A chickadee landed not a trade-gun’s length distant, looked away, then took flight. I chuckled, confident the little songbird never saw me.

Although I could not see the lower trunk of the great white oak, it sounded like the tom was standing within the tree’s drip line. Clearly, he was approaching faster. I shouldered the trade gun and pulled my left leg up to support the forestock.

The gobble came from the other side of the hill that separated us. The tom had traveled fifty or so paces in a matter of minutes. My heart pounded and my breathing grew shallow and ragged. A shiny bronze shape appeared on the crest of the hill. The sharp English flint clicked to attention as I whispered the hunter’s prayer: “A clean kill, or a clean miss. Your will, O Lord.”

It was then that I realized the bird was moving in the wrong direction:  west, not east. It’s body herky-jerked behind the hill’s rolling contour. My eyes followed the head, then I lost sight of it.

The two clucks stopped my heart from pounding. I took a deep, frustrated breath. An old raspy hen was coming to the gobbling tom. I reached for the smooth wing bone in desperation, thinking I was capable of enticing a wild turkey to forsake a flesh and blood hen standing on the hill’s crest. I knew better. I would simply have to wait until the hen lost interest in the tom.

A frequent complaint voiced by modern hunters is the constant noise in the forest. Tami and I hear this often at the outdoor shows, and sometimes at living history events, too. The songbirds, squirrels, chipmunks, blue jays, crows, Sandhill cranes, geese, you name it, they all get blamed for “disrupting my hunt.”

Not long ago, a camo-glad young man asked me about my passion for traditional black powder hunting. A few sentences into the discussion, the fellow maligned the forest creatures and asked, “Why don’t they keep quiet? I can’t hear the deer coming. In fact, I think they chase them away.”

I tried to project a Roy Keeler smile, the kind of disarming smile that exudes confidence and wisdom and softens the harshness of the advice that follows. “What you don’t realize,” I said, “is that the sounds you are complaining about are the sounds of a contented forest, a forest at peace and undisturbed.”

At that point I began to share an experiment that I propose when I feel an individual might heed my words and at least make an attempt at learning in the wilderness classroom: “Try this experiment. Approach the woodlot slow and quiet, then stand at the edge for ten minutes or so, until the birds are singing and the squirrels play. Watch and listen. 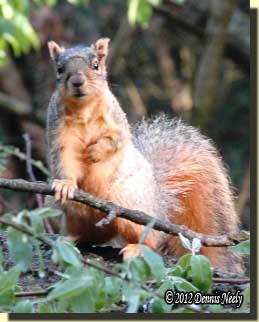 “Next, enter the woods as if you are the king of the forest. Stomp right through the leaves. Snap twigs. Kick branches out of the way. Clear your throat. Show ‘em who’s boss. Then stop halfway to your destination. Watch and listen. Don’t linger, but continue on to your stand. Kick the leaves and twigs away from the bole of the tree and take a seat on your throne. Watch and listen.

“On another excursion, approach the woods as you did the first time. Stand at the edge until the birds sing and the squirrels play. Watch and listen. When you are ready, take two steps then pause for two minutes. Take two more steps and wait two or three minutes more, trying not to disturb the birds and squirrels. Continue to stalk your destination, but pause at the halfway point again. Watch and listen.

“When you reach the sitting tree, lean against the trunk for five or six minutes, then kneel and pause. Try to clear away the leaves in slow motion, without making a sound. Humbly melt into your place in the forest. Watch and listen.”

Rare is the time when outlining this experiment doesn’t draw strange looks and scowls. No one has ever come back and said they tried it, but that doesn’t surprise me.

When I relate a particular traditional hunting adventure, I find myself including the sounds of the glade. A prominent and respected outdoor writer once told me to “lose the bird noises…” To me, these sounds are an integral part of relating that particular moment. On the surface, the “Swip-it!” of the blue jay or the “Whit, tsu, tsu…” of the cardinal might appear to have no relevance to the story, but they are just as significant as a tom’s gobble or a buck’s grunt—they are the sounds of peace and tranquility.

I can’t begin to count the number of times I’ve heard the story of a big gobbler or a trophy-sized buck that did not come in. And so many times the explanation is that this creature of the forest possessed a sixth sense that knew “something was wrong.” Perhaps that is true, but no one ever asks the obvious question: “Was the woodlot contented and at peace?” The answers to that question are often eye opening.

I remember one 50-something hunter who never hesitated or thought when asked that question. He went on to tell how the fox and gray squirrels had been running all around his pop-up blind. He said he started throwing sticks at them to drive them off. He even left the blind to gather more ammunition, until they “ran away and quieted down.”

I smiled and asked, “Do you remember how you felt when you walked into a crowded room and everyone stopped talking? Did your sixth sense suggest ‘something was wrong?’” Unfortunately, he did not grasp my message.

Early in my journey down the path to yesteryear, I realized an important lesson hidden in the words of Joseph Doddridge. I have quoted the passage often, the one dealing with the old buck that displays “superior sagacity and watchfulness.” In Doddridge’s story, the old buck survives the valiant efforts of the hunter and is left free, an “uninjured tenant of his forest.” (Doddridge, 101)

Today’s hunting philosophy seems to put all of the emphasis on the harvest, an event that rarely consumes five minutes. If one tallies the total time expended in any given pursuit, this amounts to less than one percent of the effort.

In contrast, the goal Doddridge sets forth is to blend in to God’s Creation, to become a tenant of the forest, rather than a ruling monarch. When an individual accepts this humble calling and attempts to live as a forest tenant, whole new opportunities open up.

Seek to become a tenant of the forest, be safe and may God bless you.