Fleshing Out a Persona

A silent black crow passed overhead. Sandhill cranes followed, winging west, chortling as they flew. Frost clung to the prairie grasses and dusted my hunt-stained leggins. The Northwest gun’s muzzle swung to the right as I turned quick. Deep-pink clouds touched the eastern horizon, hinting at a cold rain before midday. Such was the circumstance of that October morning, in the year of our Lord, 1798.

After a few footfalls, my progress stopped. My course veered left five or six paces, followed by a planned about-face. The intent on that cold, fall morning was to unnerve a fine fowl and offer no choice but flight with those unpredictable antics, that erratic dance. My stomach growled and churned. Thoughts of a succulent pheasant, slow-roasted over glowing coals wet my mouth. I could all but taste the butter and melted maple sugar on hot squash, too. Thankfully, the bread was a bit dry.

A strange fragrance, a blend of dry hay and damp, fresh-torn prairie grass, filled the air. A long string of Canada geese gossiped on their way west to the River Raisin. I paused to watch. As I stood, I caught a strong whiff of wood smoke. And then, as if traveling back in time, I felt certain I smelled blackberry tarts baking at the hearth in the trader’s house at Fort Michilimackinac.

I was about twenty at the time, so it had to be 1770. I hunted for a Scotch-Irish trader by the name of O’Neil, supplying fresh venison and wild game for the voyageurs of his brigade. That was my only trip to Fort Michilimackinac.

I remember being surprised when the canoes paddled ashore a short distance from the fort’s water gate, but learned this was to allow time for the voyageurs to wash and don their finery. We arrived to fusils firing, and a raucous melee of barbaric whooping and hollering ensued.

At first I wandered outside the fort’s cedar pickets. In due course I made my way to the land gate. The one blockhouse was unmanned. I climbed the stair and viewed the forest, then the buildings within the palisades. The British soldiers kept to themselves, drilling and doing what soldiers do. I don’t remember who was commandant or their regiment. It didn’t matter.

I next found my way to St. Anne’s church. It was abandoned; the priest was not due for another week. I knelt beside one of the green benches that served as pews and prayed. Afterwards, I walked around the gardens and talked with the blacksmith as he banged out a new hinge on his anvil. He was a pleasant fellow, but not prone to conversation.

I avoided the barracks and the guardhouse, then ventured into one of the trading houses. A young woman was baking blackberry tarts. She answered my greeting. We were both shy; she kept looking down at the table as she cut the rolled dough into circles. She dropped one of the crusts on the floor, but what I remember most was the sweet aroma from the hearth. But alas, the eerie screech of a red-tailed hawk brought me back to the reality of 1798.

I mulled over praying at St. Anne’s and how I had been granted God’s blessings for all these years. It was in that moment that I realized I had not offered the Lord the hunter’s prayer. “A clean kill, or a clean miss. Your will, O Lord,” I whispered.

With the adventures of my youth stowed away, I spun about. My blanket-lined moccasins took a few steps to the west, then veered right, into a small patch of barren goldenrod. A brittle stem snapped. My thumb was off the hammer’s jaw screw, resting on the trade gun’s wrist when a frantic flailing burst forth. Red and green and cinnamon streaked straight up. “Kort! Okk okk! Kort! Okk!” the fowl exclaimed.

Frost flew. Leaf shards drifted. Small, downy feathers floated in the rooster’s wake. My thumb fumbled. The sear clicked. The muzzle swung as the Northwest gun’s butt stock slammed into my shoulder. The turtle clawed at the whipping tail, and chased the bird’s open beak.

Boiling smoke obscured the fowl. Yet, in an instant I knew the death bees failed their task. I swung too fast, tried too hard to regain the advantage that I frittered away with trivial thoughts of blackberry tarts. The late swarm only changed the rooster’s direction. I watched in frustration as that magnificent bird settled into the sedge grass on the far side of the nameless creek.

A charger of powder tumbled down the trade gun’s bore. Big, wet drops plopped and splashed on the fringed cape of my hunting shirt. The heaven’s opened. I adjusted my course homeward. I arrived soaked and a bit disgusted with myself. Sometimes God answers prayers in ways other than what we think best.

The simple pursuit of wild game in the manner of our 18th-century hunter heroes is the result of a conscious choice. After all, that is what traditional black powder hunters, as true living historians, do; they live in a past time of their own choosing. The degree of immersion in yesteryear is up to the individual re-enactor, too.

At the core of our simulated time traveling is research, the snippets of “what once was” that tease and tantalize and drive us all crazy—and at the same time, become the addictive elixir that keeps us up nights with bedeviling questions that have no answers. To be sure, the dusty journals, diaries and narratives of long ago push us forward in this hobby, but there is also a need for hands-on visitation to places of historical importance.

Here again, there is a choice: living historians can visit as modern tourists, or they can slip into the mindset of an alter ego and view the world in an 18th- or 19th-century context. As an example, in 2010 Tami and I visited Hartwick Pines State Park, just north of Grayling, Michigan.

Like most state parks, the modern visitor center is not conducive to time travel, but I was barely out of sight of the building when my alter ego filled my head with 18th-century thoughts. On that warm August day, I was dressed as a tourist, but my mindset was that of a 1790-era hunter. I saw the pine forest not as an oddity, a must see attraction, but rather as the norm of everyday life, a fond memory to be stored away for future reference. 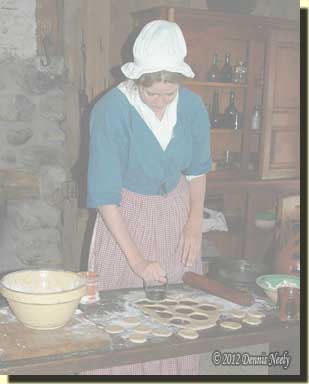 In like fashion, we visit Fort Michilimackinac as often as we can, and as it works out in today’s world that is usually when blackberries are in season. Baking blackberry tarts must be a common activity for the living historians at the fort. We have witnessed it on several occasions, enough times that the smell of baking tarts comes to mind at the darnedest times when I am in character. And this is as it should be, for that is what it means to “flesh out a persona.”

The goal of traditional black powder hunting is to re-live the past. Unfortunately, a lowly traditional woodsman cannot recognize the aroma of fresh blackberry tarts by sniffing the pages of a hunter hero’s reprinted memoirs. One learns that smell by hands-on visitation, by standing close to the young woman cutting out the crusts, by lingering and taking in the hearth’s smoky perfume, by becoming accustomed to the aged fragrance of open, unfinished beams in a reconstructed trader’s house.

Each living historian is at a different location on the path to yesteryear. Some struggle with finding adequate primary documentation sources to establish a believable portrayal, while others work at tweaking a long established persona. In either case, it is important to recognize that the characterizations we put our hearts and souls into must, at some point, become well-rounded persons of the past.

One of the fundamental rules of time is that humans have a cognitive awareness of what is happening at this instant, and most have a recollection of what happened in the past, but no one has any idea what the future, the next few seconds of life, holds. The same should be true for our alter egos.

As living historians, each person is taxed with blocking out the known future, while concentrating on life as it happens, second by second, in a chosen time period. Crossing time’s threshold is hard work and takes a lot of careful preparation, but it is also important to keep in mind that that preparation includes fleshing out a persona’s past experiences—so in the midst of an intense pheasant hunt an older hunter might recall a visit to Fort Michilimackinac when he was twenty years old.

Flashbacks to the past are a common occurrence for most people, some are fond memories and others are unpleasant—both are facts of life. To ingrain prior happenings into a persona’s life experience, a traditional woodsman must nurture a mindset that recognizes these fleshing-out opportunities when they present themselves, regardless of circumstance.

Sometimes those opportunities can be planned ahead, like a visit to Fort Michilimackinac, and sometimes they just happen, as in the case of our spur-of-the-moment side trip to Hartwick Pines. Yet, in both instances, it is snippets from within the entirety of the visit that flesh out one’s character.

Get in touch with your persona’s past, be safe and may God bless you.