Afternoon sprinkles pitter-patted. Light green autumn olive leaves bounced and bobbed, partly from the raindrops and partly from a slight breeze. The air smelled fresh and clean, a bit unusual for the first week in November. Overhead, the red oaks held all of their leaves, which was a tad unusual, too. Fall’s unseasonable warmth continued. I did not object. If I recall, the year was 1795.

Nothing moved, not even songbirds. My fingers dug around in the leather hunting bag, grasped the pewter flask and pulled it free. I rested it in my lap as I looked downhill, then glanced up at the wagon trail on the ridge. In a few minutes, I unscrewed the cap and took a short swig. The water was warm, as it so often is, from resting in the back of the bag, against my left hip. I caught myself nodding as I thought how pleasing the tepid water would taste on a cold November deer hunt.

With damp lips, I sucked once on the radius-bone call, muffling the cluck in cupped hands. It was the second time I had imitated a wild turkey hen from my ambush among the “five sisters,” five modest-sized red oaks that grew in a cluster on the east face of the big ridge. Three trees lean downhill and two grow uphill with a center space just big enough to conceal a traditional woodsman sitting on a blanket roll.

A doe trail passed a dozen paces in front of the five sisters, and a second angled behind the lair. Some nights the wild turkeys follow those trails on their way to the roost trees, off to the north. For the last week I had been hearing a cluck from that area, often enough that I felt confident the gamble was time well invested. Each evening the soft, single cluck sounded the same, and I thought an older hen might be calling her brood to the roost like Mrs. Schultz used to gather her wayward second graders with an old brass bell.

The summer insects were all but gone, save a few spiders spinning webs that would soon catch an overnight frost. That evening was also unusual, because I slipped the flask in the hunting bag as an afterthought. I still-hunted for an hour or so before sitting at the five sisters; my throat seemed dryer than normal, perhaps because I included the flask. I spent two hours sipping water and never did see a single wild turkey or hear a cluck.

“How Do You Carry Water?”

Not long ago a reader asked. “What do you do for carrying water when you are out and why?” That is a great question, and I thought I might share the answers—plural, because there are several, depending on the circumstances. 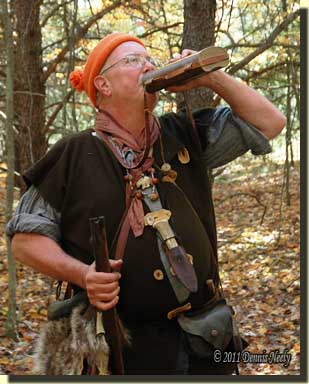 Captain Tom paused for a sip of water in the midst of an 18th-century squirrel hunt in the Old Northwest Territory.

First, I wish to dispel the myth that I spend days on end in the forest while everyone else is at work. As a full time writer, I have a hard time concentrating on hunting or keeping my mind in the 18th century when I know I should be pounding on the keyboard to meet a deadline.Therefore, the majority of hunts you read about in this blog or in the magazines only last for forty minutes and/or up to two hours—basically whatever I can squeak into my schedule.

On this particular afternoon, I was blessed with about three hours and I was able to keep my mind in 1795. When I know I will be afield for less than three hours, I drink about eight to ten ounces of cool water before I venture back to yesteryear. This amount tides me over, and if I need water to wash with, like after dressing a deer, swamp or creek water is usually a short walk away.

Years ago, my son-in-law killed a nice buck. It died in its tracks deep in the woods. After dressing it, I picked up a large handful of wet leaves and scrubbed the blood from my hands. I commented that “wet leaves are Mother Nature’s moist towlettes.” One of my daughters caught the quip on a short video and it became a much-repeated joke at special-occasion family dinners.

For no special reason, three hour pursuits seem to be the point at which my trading post hunter persona starts to carry water, as he did that afternoon. I’m still working on how the returned captive alter ego will carry water and in what.

The trading post hunter persona carries a drinking-water-safe pewter flask that was given to him by his father before he left for the Lower Great Lakes. The bottom of this flask is marked “10 ozs.” and it was manufactured in “Sheffield, England.” This accoutrement has seen many years and is pretty beat up. At best it holds about eight ounces, possibly less, because of the dents—one side is caved in, too.

My first persona was that of a French Canadian voyageur. In the 18th century the voyageurs dipped a wooden cup over the side of the canoe to take a drink. This practice is unsafe today, unless you wish to risk experiencing a severe period-correct illness or death. Because of the common presence of canoe cups in this region, my post hunter persona continued to carry the cup.

Now and again I’m fortunate enough to stay out overnight. In those circumstances I pack a two gallon brass kettle, again lined with food-safe tin. I make a second trip and pack in water, fill the kettle two thirds full and cover it with a linen dish cloth to keep out bugs, leaves and dust. The two gallon kettle allows me to fill the flask for day hunts, plus I can dip water with a wooden canoe cup when in camp. I don’t worry about contaminating the water source by dipping, because it is not shared with other hunters.

Over the years, I have participated in a number of traditional hunting camps where there was a single water source. I like to fill the canoe cup or the flask from the spigot (never contaminate the water by dipping). I don’t own an 18th-century style mug for camp use. I try to keep my kit as simple as I can.

Tami and I use canoe cups at the outdoor shows, so we are drinking in a period-correct manner in front of the show guests, rather than sipping from a fast-food container, and the habit generates a fair number of discussion questions.

For winter excursions, I have tried to wean myself away from “eating fresh snow,” because of the industrial contaminants in this area, the possibility of ingesting unwanted bacteria and who knows what else. I like to tuck the flask inside my linen hunting shirt, against my body, down to the left (being right handed) where the sash holds the shirt closed. The flask doesn’t move about or make a telltale gurgling sound as I stalk and my body heat keeps the water warm, even on the coldest morning. 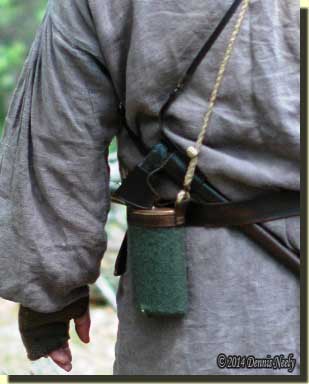 A copper canteen carried by Darrel Lang on a recent turkey hunt. The canteen has a wool and leather sheath.

A number of traditional woodmen carry a small canteen, usually made of copper and again, lined with food-safe tin. Such a container is consistent with their historical research and considered common for a French and Indian War or American War for Independence personas. They range in size from one pint to quart-and-a-half capacity. At most battle re-enactments participants are required to carry at least a pint of water, so living historians who are also traditional hunters use the same accoutrement for both purposes.

On the lighter side, years ago at the Eastern Primitive Rendezvous, both Tami and I found ourselves parched. The only drinking water we could find was sold at the “tavern” in plastic bottles. Neither of us wanted to tote around these artifacts from the future. A few vendors down from the tavern a lady was selling tanned, case-skinned muskrats. I asked if I could handle one, and when she said “yes,” I slipped a water bottle inside.

We walked away with two “somewhat” period-correct water bottle covers. We discovered the hair-on hide kept the water cold for four hours. Now Tami keeps that hide in her basket at some events with a water bottle in it. It freaks people out when you pick up a muskrat and start to drink from its lips. And sometimes we keep one out and sip from it when the kids come by, which always starts a conversation.

The days of safely drinking from a stream, lake or river are gone. As traditional black powder hunters, each of us must make sure our water is safe, which necessitates some type of container. Like any other accoutrement, a water container should reflect a common, historically documented alternative based on a persona’s time period, geographical location and station in life.

In most cases there are multiple opportunities and possibilities. Some might work better than others, so it is best to make an educated choice and then test it under actual hunting conditions in the wilderness classroom. From a traditional woodsman’s perspective, the container needs to carry sufficient water to survive without hampering the pursuit, and only woodland experience can teach a humble hunter the proper balance. What a delight!