Light rain spit. The sky appeared thick, gray and ominous. The air smelled sticky and humid. My bare shoulders and upper arms felt sweaty and damp as I tugged at the heel of my left buckskin moccasin, one of a pair I sewed so many years ago, but never wore. By the time I tied the strap from the second leather leggin to the thong about my waist, the rain was falling steady.

In a fit of mild anger, I pulled the osnaburg trade shirt over my head with a huff. The soft fabric stuck to my shoulders; the cuffs fell well short of my wrists. I rolled my shoulders back and forth and shook my arms until the sleeves dropped free. I never tied the orange scarf about my head, because the clouds opened up. 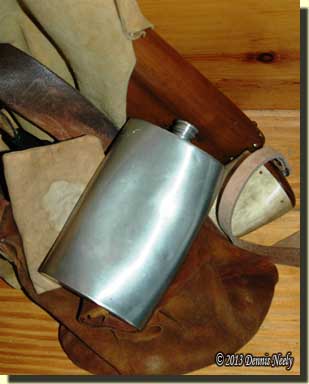 At first I stepped under the eaves in a vain attempt to avoid the fury. In my folly, I told myself the storm would pass in but a few minutes. Soaked and frustrated, I retreated into the house and watched through the window as the rain thundered on the roof. The Northwest gun leaned in the corner, still in its leather cover. The shot pouch and horn lay beside the butt stock. The pewter flask, filled with cool water, and a small sack of walnut meats rested on the pouch.

Time travels are few and far between this summer. Life’s other necessities demand the fore, much to my displeasure. What can an 18th-century child do?

From the start, I knew I only had two, maybe three hours at best. Other than chasing woodchucks, nothing was in season. Sitting in wet grass with “Old Turkey Feathers’” muzzle pointed at an empty hole offered no appeal to me. In those times, I tend to seek alternate scenarios, and on that morning the intention was a good go at “spies and scouts.”

Spies and scouts started quite by accident. In my early years as a traditional black powder hunter, Holstein heifers grazed on the North-Forty. The farm fences needed constant checking and repair, and the job of “walking fences” fell on my shoulders, because I was the one who spent the most time “in the woods,” as father used to say. Not recognizing the history-based opportunity fence checking offered, I would cover as much ground as I could, which left more time to devote to hunting.

In the mid-1980s, I started reading Mark Baker’s “A Pilgrim’s Journey” in MUZZLELOADER, and my perspective on my traditional hunts began to change. Over time, Baker’s writings helped me realize that it wasn’t good enough to just change clothes and romp through the woods with a muzzleloader—one had to develop an 18th-century mindset to guide each jaunt in the glade.

Not long after the herd was sold I began adding a healthy dose of stealth to the fence checking, except the need to stay close to the fences was gone, too. There weren’t many turkeys on the farm at that time, so the whitetails took on the role of British spies and scouts. For me, spies and scouts became a learning exercise in the wilderness classroom, a sort of forest game where you “lived” or “died” on your “own hook,” as Baker so often wrote.

The point was to traverse ground from one point to another without being “caught.” If a deer scented this traditional woodsman or in any way showed knowledge of my presence, I was caught and presumed killed. In later years, the same held true for the wild turkeys. Because of their keen eyesight, quick “putts” and hasty retreats, I often thought of them as Native American scouts accompanying a less aware British patrol.

On the surface, the game seems silly, but skirting the big swamp or the nasty thicket in an attempt to deliver an important message usually produces a number of heart-pounding encounters with cautious old does or wily mother hens. Survival is harder than one might think, even when one sits in hopes of avoiding detection from an approaching English spy.

At any rate, my hoped for spies and scouts never happened. To say the least, I was disappointed, not only from the standpoint of not making it to the woods, but also because that outing was supposed include another “get acquainted” sojourn with my new persona: a native captive returned to white society.

During the winter, I had grand designs on completing the basic regalia for this new persona by spring turkey season. That never happened, and deep down, I knew it wouldn’t. The alternative path was to repurpose some of my existing clothing and accoutrements for the time being while I worked on replacements.

By necessity, I had to use the old buckskin moccasins, because my elk moccasins are worn out. I decided to use my hunt-stained leather leggins, a not-so-period-correct wool breechclout, a hand sewn osnaburg trade shirt, a loom-woven wool sash and a head scarf worn turban style. My current shot pouch would have to do, along with the powder horn, too. A part of choosing this new persona was the fact that the Northwest gun fit.

In going through my hunting clothing, I set a medium-weight linen trade shirt aside. I think it’s about 14 years old, but doesn’t show much wear. I use it, or did, on winter hunts as a second shirt. It is machine sewn, which I am trying to get away from, but I thought it would work as an over shirt for my new persona.

So on that rainy morning, I slipped out of my wet clothes and dug out the linen shirt. The time was set aside for living history, and I intended to use it. The collar and cuffs are a tad wider than was common in the 1790s, but I can live with that, for now. As I examined the shirt closer, I saw that it had some pulled seams and a frayed neck line. I went about repairing the damage with a back stitch. 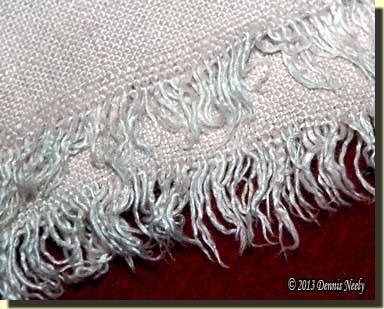 The frayed hem’s fringe was once considered period-correct, but now represented reliance on poor research.

The most glaring defect was the unraveled hem. When the shirt was first sewn, frayed hems were common and accepted. That has changed, and a sewn hem is now considered period-correct for this garment. It didn’t take much to trim off the threads and square up the hem. Even though the shirt shows machine sewing, I used a hem stitch, if for no other reason than practice. The stitching consumed more than the allotted time. I found it relaxing and enjoyable. Thankfully the rain continued, reinforcing my alternate choice.

As I worked, I noticed the fabric had yellowed a bit. From experience, I know my character would prefer an over shirt that is darker in color. I envision the shirt well stained, and perhaps that will come when it is used as an outer garment. I rolled the shirt about in my hands, wanting to keep going. I started to consider what to dye it with, and I longed to make a trip to the forest to begin gathering natural dye stuff, but that will have to wait for another drier day…