The search resumed at dawn. Frost-tipped cedar boughs dotted the steep hillside. Night’s cold, clear sky turned azure, and in a short while, yellow streaks of sunlight crept over the little valley. On that crisp November morn, I made no attempt to cross time’s threshold.

The rule on the North-Forty is that all hunting stops when we have an unrecovered deer, or any game, for that matter. All hunters put forth their best effort to be certain the deer is either not hit, or if blood is drawn or hair found, that the wound is not mortal and the animal will survive. No one takes a stand or begins a still-hunt until that task is completed.

No matter how careful we are as hunters, these situations occur. We work to minimize them, of course, but whether modern or traditional, all hunters bear a responsibility to the game to make sure and not waste a valuable resource.

There can be too many people in a chase, which actually hampers progress and destroys sign, but in this case, there were just Andrew and myself. Four of us searched with the living historian who took the errant shot until after dark, but he had to return home. To say the least, he was pretty upset, to say nothing of reluctant to leave. 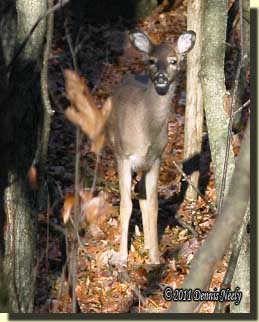 The doe wandered by the traditional woodsman’s stand an hour before dark. He said at first she was at the outer limit of his effective distance, but as he waited, she angled closer. After the fact, he paced the distance at 38 steps. Being a veteran hunter, he chastised himself unmercifully for flinching as he pulled the trigger. He said he thought he was calm when he cocked the firelock’s hammer. He was sure he saw leaves fly up behind the doe, but we could not find the musket ball’s skid mark.

The doe loped off, and the woodsman made a mental note of his last sighting of the waving white tail. Unfortunately, that location was at the juncture of a half dozen trails that crossed into the valley or followed the hill’s rough contours. As we scoured the area where she stood when he took the shot, he scowled and said, “I think she stopped and looked back where I last saw her.” Evening slid into stumbling blackness as we finished looking for evidence in that area, too. We found nothing and were forced to withdraw.

About an hour after we started, Andrew stood in the uphill trail with his hands on his hips. As I peered up from the lower trail, the sun turned him into a dark silhouette. From his demeanor, I knew what was on his mind. “Can you tell me how many deer walked on this hill last night?” I asked.

“No, can you?” he answered with a clear frustration in his voice.

“No, and that is the point,” I said. “We have no way of knowing if that doe took your trail, or mine, or one of the others, so we keep looking until we find something or nothing. We’ll quit when we’re satisfied we’ve exhausted all possibilities.”

My son-in-laws are quick to pitch in when we track deer, regardless of the circumstance. Their eyes are better than mine, plus, for me, it affords an opportunity to pass on years of hunting experience. Most deer don’t make it very far. After a game animal is tagged and dressed, I always backtrack to learn all I can from the trail. I stand and try to see what the whitetail saw and understand why it took that particular course of flight. As impatient as he sometimes gets, Andrew has picked up on this practice.

As we unravel a deer’s final journey, our discussions often cover basic woodcraft skills. While Andrew straddled the upper trail, I told him about Josiah Hunt, and how he would leave the fort in the dead of night to feed the garrisoned troops and how he was revered among the warriors for his great stealth.

Andrew relaxed a bit with that story and started asking questions. We talked about clearing the ground both for releasing the forest’s natural scents and so a hunter can reposition without making noise. I spoke about hunters who clear a nest on the ground, then leave it open when they depart the area, rather than returning the nest to its original state. I offered an 18th-century perspective, then told of the doe that stood for almost an hour, hidden in the edge of the thicket as it concentrated on the hollowed-out mess where a modern hunter once sat.

“Take Nothing But Memories…”

For some reason, the old sign that once hung on the main gate at the National Muzzle Loading Rifle Association’s Walter M. Cline Range at Friendship, Indiana, came to mind. It read: “Take nothing but memories, leave nothing but footprints.”

The quote is attributed to various authors, and often listed as “unknown.” Setting that issue aside, the point that I made with Andrew was that this is how the land and its inhabitants should be treated. The only exception is the taking of game or the harvesting of natural resources consistent with a sound property management plan and state and federal game regulations. 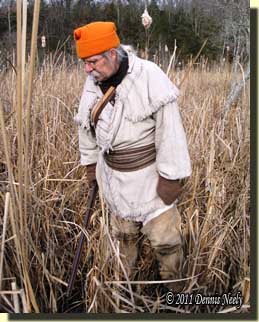 I went on to tell Andrew I was walking beside the trail I was on, intentionally keeping my moccasin prints in the short, soft grass, rather than on the churned up earth. Like Josiah Hunt, I was endeavoring to minimize my presence in the wilderness. In effect, I strive to not leave any footprints or physical evidence of being in that spot, whether as a 1790s time traveler, or a modern hunter searching for a lost deer.

As we walked the last two trails, I emphasized the importance to me of the phrase, “Take nothing but memories.” This is one of many driving forces behind my passion for traditional black powder hunting. The reality of fair chase is that we succeed only now and then, but that most times the game we pursue holds the upper hand and thus escapes unharmed and unfettered.

At the various outdoor shows we attend, we are hearing more and more hunters, mostly the thirty-somethings and under, complain about not stacking up game on every outing. This is not what hunting is all about, but rather the end result of the “gadgeteers,” as Aldo Leopold called them, hawking their wares. Please don’t misunderstand, there is no faulting the providing of products to meet the modern hunter’s needs and marketing them in a responsible manner. But in my opinion, the pendulum has swung too far to one side, and thus the gadgeteer’s salesmanship is creating unreasonable expectations, expectations that tend to drive young hunters from the sport.

In sharp contrast, the traditional hunting philosophy emphasizes enjoying every second of the hunt, and if game is taken, well, that is just an added bonus. In addition, the methodology also focuses on constant woodland learning and skill development, which provides a lifetime of enjoyable opportunities.

Our separate trails merged. I noticed he was walking to the side of his earthen path. Andrew looked at me and said there was no way the doe was hit. We had exhausted all possibilities and arrived at a common mind. We didn’t recover a deer, because there was no deer to recover. Yet even though some folks might think the morning was a bust, we both came away with a wonderful memory.

One Response to Exhausting All Possibilities