A gray nose poked from the deep green grass. A cunning eye, attentive ears and a sleek, lean body burst from the left. The Jeep’s brake pads gripped the rotors firm, but not hard enough to squeal tires. A second wolf, a bit smaller than the first, appeared. Both looked straight at me as if questioning my intrusion into their territory. Neither animal hesitated or broke stride. In a matter of heartbeats the wolves melted into the lush underbrush that hugged the right roadside. 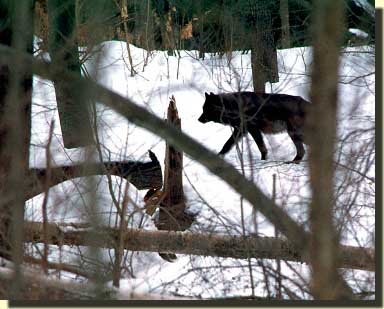 We traveled a short distance before either of us said a word, other than “wolves.” Tami commented about how it was “3:30 in the afternoon on a bright and sunny day.” It was then we both thought about the Nikon sitting on the back seat. As married couples do, I answered her unspoken statement with a reassurance that the wolves came and went so fast neither of us could have gotten a picture. The chance meeting was destined to fall in the magnificent memory category for both of us.

We were in route to the Michigan Outdoor Writers Association dedication ceremony for the Ernest Hemingway historical marker at the East Branch of the Fox River Forest Campground, located on M-77, eight miles north of Seney, in Michigan’s Upper Peninsula. In 1919, Hemingway rode the train into Seney, then hiked to the Fox to camp and fish. His famous short story, “Big Two-Hearted River,” is based on that fishing trip.

A Couple of Firsts

That afternoon turned out to be special. I wasn’t dressed in 18th-century garb or toting “Old Turkey Feathers,” but outdoor experiences are like that. On the one hand, we had a great time at the dedication—we saw new country, made new friends and reconnected with old ones. A few feet away, down over the cut bank, the Little Fox River gurgled on its way throughout the speeches and stories, just as it did before and will after. 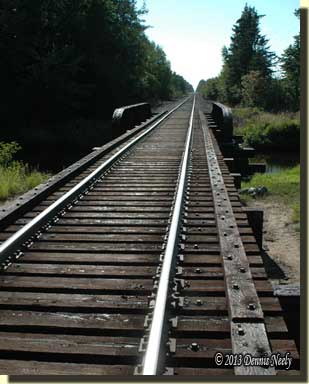 When the festivities ended, we all quietly, almost reverently, dispersed. I had reread “Big Two-Hearted River” the week before, so the historian in me wanted to see the Seney train station and walk the tracks a ways. I was hoping to experience the same kinship with Hemingway that I feel with my hunter heroes, and I did. If I had the time, I suppose I would like to try traditional fly fishing—I’m sure there are fishers out there who do that.

On the other hand, the brief encounter with the wolves was also a first for Tami and I, the first time either of us have seen wolves in the wild. I’ve seen fresh wolf prints on a sandy two-track not far out of Escanaba, but never seen the real deal. That’s not surprising, because I spend the vast majority of my woodland hours on the North-Forty. I’m happy with that, and have been for all my live. A person grows to love a piece of ground, and one of the attractions of that love affair is the constant change and newness each excursion offers.

The physical changes that mark a given piece of property happen gradually, and most hunters, traditional or modern, never give them much mind. Only when we catch ourselves telling stories of what the lay of the land was like “back in the 1950s, or 1960s, or 1970s” do we come to realize the land has evolved. Seeing the wolves was such revelation.

One of my first mentors was Joseph Doddridge. Like so many traditional hunters, I read over his musings about the wolf but failed to assimilate it in my historical persona—wolves were not relevant to my 18th-century experience, in part, I think, because I lacked 20th- or 21st-century knowledge of wolves. And even Doddridge, looking back in 1824, spoke of wolves more from memory.

“The wolves, formerly so numerous, and so destructive to the cattle, are now seldom heard of in our older settlements…” (Doddridge, 57-58)

As my research progressed and focused more on the North-Forty, I found myself reading the early accounts of the pioneers who settled in Jackson County, Michigan. The Reverend Asahel A. King wrote:

“The wolves used to howl terribly at night. In the winter of 1837 they killed and ate an Indian, near the corner of Tompkins, Eaton Rapids, Springport and Onondaga townships [the northwest intersection of Jackson County with Eaton and Ingham Counties]. He backed up against a tree and fought with his hatchet until he killed seven wolves; then he was overpowered. His hatchet, some of his clothing and part of his body and the wolves were soon found. Many others made very narrow escapes.” (History of Jackson County, 199 – 200)

A hop, skip and a jump west of the North-Forty, Mrs. M. W. Clapp echoed King’s statement about the wolves howling at night, also in 1837:

“…the wolves and screech-owls would sometimes make night hideous…” (Ibid, 204)

And then there is Darius Cook’s narrative, appropriately titled Six Months Among Indians, Wolves and Wild Animals, in the Winter of 1839 and 1840. I passed over Cook’s writings based on the fact the time period did not correspond to my 1790-era persona. I have come to the opinion that sometimes the well-meaning emphasis on limiting one’s research to a specific time period, geographical location and station in life creates a vision pattern that distorts the overall perception of one’s persona.

A generation after my beloved 1790s, a young journalist by the name of Darius Cook suffered a bout of ill health. A doctor happened into the newsroom at the Kalamazoo Gazette. After listening to Cook’s symptoms, Dr. Starkweather prescribed a remedy:

“You want fresh air and exercise. Go live with the Indians, sleep in their wigwams on a bed of leaves, hunt in the forests, live as they live, and the chances are you will recover. Pure air, rarefied by the trees in the forest, will do any man good.” (Cook, 16)

Darius Cook enlisted a companion, James Rhodes, and the two set out on a journey that landed them in “an old log shingle shanty on land owned by a Mr. Seymour,” about four miles from the headwaters of the Rabbit River in Allegan County. (Ibid,19) Chapter after chapter relate the constant danger and threat involved with living in the wilderness with packs of wolves and panthers. Here again, Cook’s experience mirrored that of the Reverend King and Mrs. Clapp:

“…In the deep snow our progress was slow. We heard the growl of a wolf in the rear. It was dark and gloomy. We grasped the limb of a small beech tree and leaped into its branches and not too soon, for a big wolf was near us…During this time wolves were all around but could not be seen…There was not a night the wolves did not follow us to our lodge as seen by their tracks in the morning.” (Ibid, 53)

As I consider a new persona, based on a strong Native American influence, I could not help but notice the visit of Adaniram Judson, a Pottawatomi interpreter, to Cook’s cabin:

The quest of this traditional woodsman is to answer a not-so-simple question: “What was it really like to hunt, live and survive in the Old Northwest Territory?”

This joyous journey is endless. The path to yesteryear is littered with magnificent memories. And some, like the chance sighting of two wolves, turn one’s perceptions upside down, but the goal of this glorious endeavor is a better understanding of the truth. Hopefully, today’s knowledge is better than yesterday’s and tomorrow’s revelations will be better than today’s.

2 Responses to A Magnificent Memory