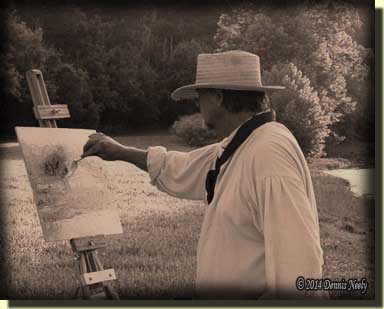 The writings of John James Audubon, the great ornithologist, painter and writer, offer a unique view of early 19th-century backwoods society. In Delineations of American Society and Character, Audubon described in vivid detail the Fourth of July celebration at Beargrass Creek. In his words:

“Beargrass Creek, which is one of the many beautiful streams of the highly cultivated and happy State of Kentucky, meanders through a deeply shaded growth of majestic beech woods…The spot on which I witnessed the celebration of an anniversary of the glorious Proclamation of our Independence is situated on its banks, near the city of Louisville…” (Audubon, 241)

“…The whole neighborhood joined with one consent. No personal invitation was required where every one was welcomed by his neighbor, and from the governor to the guider of the plough all met with light hearts and merry faces…” (Ibid)

“…Now the waggons were seen slowly moving along under their load of provisions, which had been prepared for the common benefit…In a word, Kentucky, the land of abundance, had supplied a feast for her children…” (242)

“…Columns of smoke from the newly kindled fires rose above the trees; fifty cooks or more moved to and fro as they plied their trade; waiters of all qualities were disposing the dishes, the glasses, and the punch-bowls, amid vases filled with rich wines. “Old Monongahela” filled many a barrel for the crowd…” (Ibid)

“…In a short time the ground was alive with merriment. A great wooden cannon, bound with iron hoops, was now crammed with home-made powder; fire was conveyed to it by means of a train, and as the explosion burst forth, thousands of hearty huzzas mingled with its echoes. From the most learned a good oration fell in proud and gladdening words on every ear, and although it probably did not equal the eloquence of a Clay, an Everett, a Webster, or a Preston, it served to remind every Kentuckian present of the glorious name, the patriotism, the courage, and the virtue, of our immortal Washington. Fifes and drums sounded the march which had ever led him to glory; and as they changed to our celebrated “Yankee Doodle,” the air again rang with acclamations.” (243)

“…However, as Kentuckians are neither slow nor long at their meals, all were in a few minutes replenished, and after a few more draughts from the bowl, they joined the ladies and prepared for the dance.

“Double lines of a hundred fair ones extended along the ground in the most shady part of the woods, while here and there smaller groups awaited the merry trills of reels and cotillons. A burst of music from violins, clarionets, and bugles, gave the welcome notice, and presently the whole assemblage seemed to be gracefully moving through the air. The “hunting shirts” now joined in the dance, their fringed skirts keeping time with the gowns of the ladies…” (243-244)

“…During each interval of rest, refreshments of all sorts were handed round, and while the fair one cooled her lips with the grateful juice of the melon, the hunter of Kentucky quenched his thirst with ample draughts of well-tempered punch…” (244)

“…You would have been pleased to see those who did not join the dance, shooting at distant marks with their heavy rifles, or watch how they shewed off the superior speed of their high bred “old Virginia” horses, while others recounted their hunting-exploits, and at intervals made the woods ring with their bursts of laughter… (Ibid)

“…But now the sun has declined, and the shades of evening creep over the scene. Large fires are lighted in the woods, casting long shadows of the living columns far along the trodden ground, and flaring on the happy groups, loath to separate. In the still clear sky, began to sparkle the distant lamps of heaven. One might have thought that Nature herself smiled on the joy of her children. Supper now appeared on the tables, and after all had again refreshed themselves, preparations were made for departures… (244-245)

“…the glorious Proclamation of our Independence…”

Lacroix’s Militia advancing the colors at the Battle of Frenchtown, late-January, 1813. “Remember the Raisin!”

At Christmas or at Easter, Christians embrace and reflect upon the words of the Scriptures. So often we hear “the reason for the season” intermixed in quiet conversations. As a Christian, I return to the story of the Nativity or the Passion to reconnect with the very foundation of my existence, which in today’s society runs counter to the tenants espoused by those who wish to control us.

For the same reason, on this July 4th, we should all take a few minutes and read the Declaration of Independence in its entirety and encourage all our family members and acquaintances to do the same, especially the list of grievances. After reflecting upon Audubon’s description of the 19th-century Kentucky barbeque Fourth of July celebration at Beargrass Creek, one might find it enlightening to read again the list of grievances, replacing “He” with “Our Government.”

“The Declaration of Independence: In Congress, July 4, 1776″

“The unanimous Declaration of the thirteen united States of America,

“When in the Course of human events, it becomes necessary for one people to dissolve the political bands which have connected them with another, and to assume among the powers of the earth, the separate and equal station to which the Laws of Nature and of Nature’s God entitle them, a decent respect to the opinions of mankind requires that they should declare the causes which impel them to the separation.

“We hold these truths to be self-evident, that all men are created equal, that they are endowed by their Creator with certain unalienable Rights, that among these are Life, Liberty and the pursuit of Happiness.–That to secure these rights, Governments are instituted among Men, deriving their just powers from the consent of the governed, –That whenever any Form of Government becomes destructive of these ends, it is the Right of the People to alter or to abolish it, and to institute new Government, laying its foundation on such principles and organizing its powers in such form, as to them shall seem most likely to effect their Safety and Happiness. Prudence, indeed, will dictate that Governments long established should not be changed for light and transient causes; and accordingly all experience hath shewn, that mankind are more disposed to suffer, while evils are sufferable, than to right themselves by abolishing the forms to which they are accustomed. But when a long train of abuses and usurpations, pursuing invariably the same Object evinces a design to reduce them under absolute Despotism, it is their right, it is their duty, to throw off such Government, and to provide new Guards for their future security…” (Bragdon, 734)

May God have mercy on us…

4 Responses to A Kentucky Barbecue…