“There are places I remember, all my life, though some have change,” Judy Collins sings with her characteristic soft, seductive voice while strumming her acoustic guitar. The needle point dips into the olive-green silk ribbon, hand-dyed by Mary of Brandenburg Storehouse, grabs the blue wool and then emerges out of the ribbon. The leather finger protector gives a gentle push. “Some forever not for better,” Judy warbles on as I tug the needle and pull the linen thread snug. “Some are gone and some remain…”

I had to “force” myself to put the writing aside for the last couple of days. I feel guilty, but I have sewing that needs to be attended to—and only “so many hours…” The early Canada goose season is fast approaching, followed by the opening of squirrel season. The seasonal itch returned the other morning when it was so cool and pleasant out. In the midst of a research project, my mind wandered and I found myself pulling Doddridge from the bookshelf. The passage that I always return to is marked with a purple sticky note that says “hunting season:”

“As soon as the leaves were pretty well down and the weather became rainy, accompanied by light snows, these men, after acting the part of husbandmen, so far as the state of warfare permitted them to do so, soon began to feel that they were hunters. They became uneasy at home. Everything about them became disagreeable. The house was too warm. The feather bed too soft, and even the good wife was not thought for the time being a proper companion. The mind of the hunter was wholly occupied with the camp and chase. I have often seen them get up early in the morning at this season, walk hastily out and look anxiously to the woods and snuff the autumnal winds with the highest rapture, then return to the house and cast a quick and attentive look at the rifle, which was always suspended to a joist by a couple of buck’s horns, or little forks…” (Doddridge, 98-99) 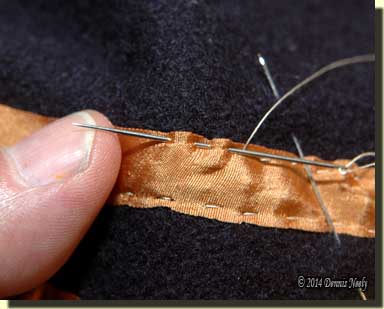 The needle disappeared under the silk ribbon, took another bite of wool, emerged, then disappeared again. The silk ribbon edge binding was an addition to a breechclout for Msko-waagosh’s woodland wardrobe. I intended to complete this project months ago, but good intentions…

The stitching fell into a rhythmic pattern. Judy was singing “Someday Soon,” and I was lost in the moment. I got to thinking about sitting on the gold and rust and beige shag carpet on the living room floor, thirty-plus years ago. I was new to traditional black powder hunting; I didn’t have a clue what it was called back then and I didn’t care. I was enthralled with the idea of hunting with a flintlock Northwest trade gun. After supper I would put a cassette of Judy in the stereo tape player, or Peter, Paul and Mary, or John Denver or…you get the idea.

We weren’t big television people back then, still aren’t. Mary would correct papers or work on class preparations. Some nights she would just sit in her rocking chair and read the latest novel from Danielle Steel. I would work on material takeoffs and estimates, and some nights I sewed my first elk shot bag, or a trade shirt or a red wool breechclout.

I lost track of time. The ribbon was ready for the finishing stitches on one side. The music returned to Judy’s rendition of John Lennon and Paul Mcartney’s “In My Life.” I stopped sewing when she sang “Some are gone and some remain.” A spot of melancholy swept over me.

Breast cancer took Mary like it did her mother, grandmother and great-grandmother. The girls are grown, the carpet is gone and the cassettes…we all know what happened to them. That first elk shot bag is soiled and a little stretched out of shape, but it still hangs on the side of the muzzleloading cabinet. The green-calico trade shirt is faded with a couple of holes burned in the right shoulder, but it’s on a hanger in the guest-room closet. The red wool breechclout is folded and tucked in a dresser drawer—the returned native captive persona actually hunted with it a few times last October. “Some are gone and some remain…”

Most of those early creations missed the mark, but over the years I have always tried to improve with each new item of clothing or accoutrement, to inch closer to 18th-century reality. In recent years, I’ve gotten hooked on hand sewing, and I spend as much time as I can studying existing museum artifacts. And when I can’t view the originals, I peer through a magnifying glass at photographs, most times until my eyes won’t focus any more.

The creation of the native captive persona has necessitated a return to those “primitive hunting” early years. Somehow I have lost the spare time that I once had. Some say it is age, and perhaps that is true. But I am forcing myself to set an hour here and an hour there aside to sew with hopes of taking Red Fox to another level of historical adventures in the upcoming hunting seasons. 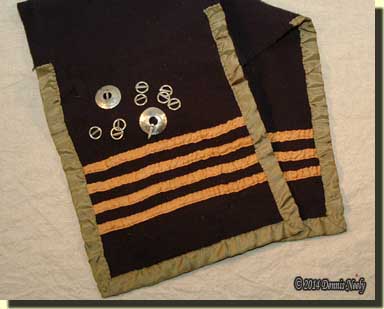 And when I reflect, I used to venture back in time now and again with a different purpose; my hand-sewn elk moccasins would wander to a woodland camp with gleeful thoughts of stitching away an hour or two. The songs of the creatures of the forest replaced Judy’s or John’s voice with unmatched joy. Geese ke-honked as they flew west to the River Raisin; a fox squirrel might scold from a scraggly hickory branch; and the distant clucks of a wild turkey hen might echo over the huckleberry swamp, or the nasty thicket or the narrows. How did I let that slip away from me?

Well, the breechclout is almost finished. With a finger’s worth of ribbon to secure, I’m debating on how “old” it should look. And I want to add two medium-sized silver brooches and maybe a few ring brooches—on a number of occasions John Tanner wrote about his trade silver. With any luck, tonight I might get a chance to cut out a pair of wool leggins, fashioned after those worn by Sir John Caldwell, but that is another story. Maybe I can wander into the glade and sew? I would like that. So if you will excuse me, I have a few more running stitches to complete, because the seasonal itch is growing in intensity…