Which Way to Go?

Tiny silver orbs festooned the tickle grass. Looking like a cloud on earth, the expanse shimmered in the morning’s soft light. Keeping to the shadows, my elk moccasins skirted the tickle grass for fear of defacing God’s magnificent artwork. It was late September in the Year of our Lord, 1796.

“Jay! Jay! Jay! Jay! Jay!” A blue jay screamed. A ridge distant, the woodland sentinel was not announcing my presence to the tenants of the forest, but rather warning of some other concern. It struck me that this was the first blue jay I’ve heard in quite some time; I paused to listen, to enjoy, to ponder.

That Wednesday’s air felt cool and refreshing; it smelled sweet, a pleasant mix of drying field corn, fresh-cut hay and wild mint. In due time my moccasins whispered on as my course veered from the edge of the open prairie into the hardwoods. Sunlight filtered through the treetops and created a mosaic of light and dark splotches on the tree trunks, the understory bushes and the wispy green grass that awaits the arrival of a myriad of colored leaves. 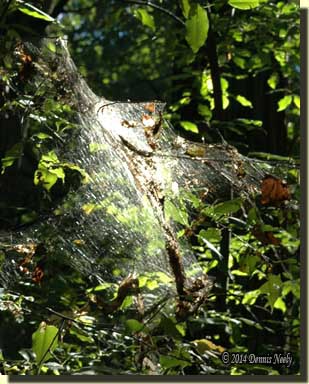 A ways down the east face of the hill, an abandoned, silky, worms’ nest caught my attention. A brilliant spear of light illuminated the nest, beckoning me to come closer. Crows cawed in the distance. I left the doe trail and stalked the glowing web. A squirrel chattered farther east. I stood for the longest time, glancing at the nest, checking my back trail and trying to decide where to wander next.

A bit later, as I approached the edge of a small clearing, I happened upon what appeared to be a buff-colored branch, standing tall in a sunlit clump of dark-green grass. I stopped. I told myself, “the branch does not belong.” Minutes ticked away, and in that time I attempted to make sense of the unknown shape that reflected the sun’s rays. Then a young fox squirrel turned about and bounced to the clearing’s far boundary, satisfied that the linen and leather clad woodsman posed no threat.

As I watched and waited, a grey head popped up at the crest of the next hill. Two smaller heads, not as tall or as large, bobbed up and down in the wild turkey’s typical herky-jerk fashion. The hen’s head remained upright, then stretched a bit skyward while its progeny pecked away. In an instant, I found the roles reversed: I was now “the branch that does not belong,” and the hen was the forest tenant trying to make sense of the circumstance.

My heartbeats grew stronger as the matriarch tried to assess the situation’s potential danger. It turned its head side-to-side with measured caution, then it started the “bob-and-weave” that so often precedes the dreaded three “Putts.” My leather leggins felt warm, as did my right hand; my dark-flowered, ruffled shirt felt cool and so did my ankles and moccasins. With great skepticism my mind argued that the sun and shadows worked to my advantage.

The hen’s neck seemed to relax. It dropped its head like the youngsters and soon all three were popping up and down. Then I saw the sun reflect off bronze back feathers, and the grey heads disappeared. Again I waited and watched. A tad later, where the birds last stood, I found the leaves disturbed and the remnants of scratching and thrown dirt. Overhead a string of eight geese winged in silence and once again I pondered which way to go.

In September, finding time to venture back to yesteryear is always difficult. Preparation and attendance at the Woods N Water News Outdoor Weekend, the National Championship Shoot at the home grounds of the National Muzzle Loading Rifle Association in Friendship, Indiana, and a host of other one-day or weekend functions burns up the better part of the month. This year was no exception.

The month slid by like an otter slipping down a snowy bank, but perhaps with not as much grace. Looking back, I’m surprised at how much I did accomplish in the time allotted. I came out of the month with a lot of positives, more than ever before, to say nothing of feeling a renewed sense of energy with respect to traditional black powder hunting. But those feelings are tempered with disappointed when it comes to what didn’t get attended to, especially the writing obligations.

That morning, the only sojourn to my beloved 1790s in quite a while, took a Herculean effort. I forced myself to take a baby step; I simply couldn’t tolerate being away from the North-Forty any longer. I could only squeak out about an hour, but what a glorious fifty minutes I had frolicking in my 18th-century Paradise. Just donning the rudimentary belongings of Msko-waagosh proved exhilarating. “Old Turkey Feathers” remained empty, because the emphasis of that time traveling episode centered on reconnecting with the glade, pure and simple.

Throughout the month, two related, underlying threads permeated many of my conversations with others in the black powder/outdoor community: an expression of frustration with the increasing demands of the modern world and the inordinate time required to successfully address even the simplest of tasks.

There were other conversations of equal importance, most upbeat and positive. Yet, in both cases, the end result is that these two thieves leave little time for living historians to romp in the long ago. And what is most troubling is the clear growth in the ranks of those who “can’t find time for the woods, anymore…”

As I wandered the ridge, I found myself reflecting on some of those conversations. It is apparent that a stark difference exists between the mental attitude of those who can’t find time, and those who do: the latter make time, sometimes with great effort. So often I get caught up in explaining the need for developing a proper 18th-century mental attitude with regards to my living history pursuits, but I now realize I must also encourage others to develop a proper 21st-century mindset to facilitate one’s time-traveling addiction. 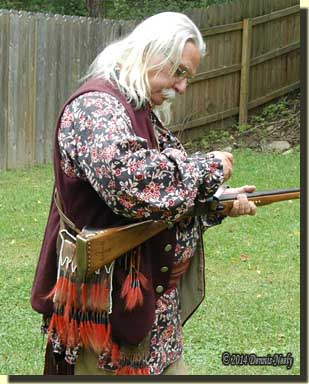 Near the end of that morning’s adventure, I breathed a sigh and scribbled in my journal: “what I deem important, the world deems frivolous. But with the Grace of God, I control my own destiny!” After all, I am the one who says “Yes” when the answer should be “No,” for whatever reason.

I have little doubt that setting aside fifty minutes extended my workday, but the victory, small as it is, was well worth the effort. When I returned to my office and embarked on the next scheduled task, I paused for a few moments and resurrected a work habit abandoned months ago: I started playing the sound track from “The Last of the Mohicans.” I can’t say that I accomplished more, or produced a better work product, but I felt at ease and more content with the world, such as it is.

As the weather cools, the urge to return to my forest haven increases. Finding the minutes, and hopefully hours, will take a Herculean effort, just as that morning’s ramble did, but I must. For the immediate future, the daunting challenge is to beat the world at its own game, to slot a smidgeon of time traveling here and dash there amongst the 21st-century’s false priorities. So often in my 18th-century world I stand still, pondering which way to go. That practice has served me well, and on that September morning in 1796 I resolved to take heed, to stand in the here and now and to ponder which way to go.

Take time to chart your course back to yesteryear, be safe and may God bless you.