A decent-sized doe scrambled to her feet. The startled whitetail stared to the right, looking downwind over its shoulder. Broad, fully-open ears flipped front to back. The tip of her tail twitched a bit, but it appeared she thought better of that. She stood shoulder-deep in the midst of the upturned boughs of an old juniper bush, not ten paces from the scrape. The rich, fresh-pawed earth told the rest of the tale.

Raindrops fell from churning, grey clouds. Just a few at first, then enough to instrument a steady patter on dry, yellowing leaves. The doe bounded over the knoll, ducked behind several clumps of autumn olive, then walked to the trail that headed to the southeast. When she stopped glancing back, my moccasins whispered off in the other direction.

The ridge’s east slope leveled out. The trees thinned, and the grass grew thicker. The brass kettle’s iron bail creaked a bit as it swung free, but the noise mattered little for the steady din of the afternoon drizzle muffled a humble woodsman’s advance. Much to my relief that stand of stinging nettles was still green, perhaps not as lush as in July. I placed the kettle in the grass, donned an old pair of deerskin mittens and began slashing with the butcher knife.

A couple of years ago I experimented with boiling wild mint leaves to make a period-correct dye bath. DO NOT TOUCH STINGING NETTLES WITH BARE HANDS.

With a quick motion, the left mitten stripped the lower leaves from the stalk. Some missed the kettle and came to rest on the grass. A swift cut with the knife severed the stalk, then two or three judicious cuts divided up the bushier tops. I grew careless with experience. A couple of leaves brushed my cheek after I grabbed a stem. The leaves were now wet and much to my relief, did not sting. I began to doubt if the foliage would make a usable dye bath.

I pressed on, my human existence soothed by the rain’s melody. I compressed the kettle’s contents about the time a lone Canada goose winged overhead. I looked up; it looked down. I went back to work, and in the distance, I heard the goose ke-honk as it approached the River Raisin. My mind wandered, imagining all manner of simple pursuits that were but days away, over time’s threshold, a few footfalls distant in the Old Northwest Territory of the late 18th-century.

The fall is upon me with the urgency of avoiding a herd of bison stampeding in the night. As always in my traditional pursuits, there is more that I wish to do than time to do it. Choices must be made and priorities assigned.

The ground under the walnut tree at the bottom of the hill is green with fresh-fallen walnuts. I set time aside to gather a kettle or two. I keep a five-gallon pail of walnut hull dye in the basement, and the one I have is old and weak.

I’m not big on dying everything the same color, because I don’t believe that was done in the 1790s, especially among the Native Americans, which is the historical foundation driving the returned captive persona. But the walnut dye bath is great for adding a bit of age to an artifact in conjunction with other methods, and it is time to replenish the vat. 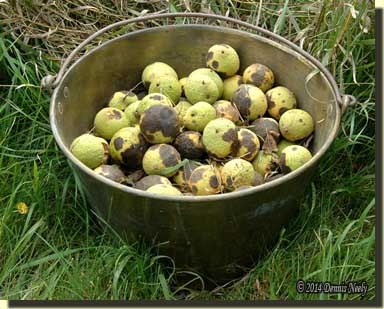 Once home, I filled a five-gallon plastic pail with hulled walnuts and added enough rainwater to cover the firm, green skins. This is not the course I had hoped to take; I wanted to build a fire in the woods and boil the hulls in the brass kettle as it was done long ago. But modern time constraints lead to necessary compromises, at least if I want to get the job done.

Alas, an historical boiling will have to wait for another day. So, as I winterize the rolling stock and start closing up for the colder months, I will set a kettle to boiling on top of the plumber’s pot burner. By following this course, I can tend the dye pot and work on another project at the same time.

After collecting the walnuts, I headed back to the ridge. Heavy grey clouds were rolling in and the air felt damp and heavy. I knew I would get wet, but I’ve wanted to try dying with stinging nettles for some time. I understand the leaves and stems produce a decent shade of green.

My trading-post alter ego owns a fine, hand-sewn, natural-colored linen hunting shirt. I first tried dying it with a bath made from wild mint. The dye produced a gorgeous light green, but it washed out. I studied the lone surviving recipe and tried again with a different mordant, but the results were the same.

I next dabbled with wild grapes. The wine color was stupendous and seemed to hold, but with time it turned a dingy grey, then faded away in the sun. I re-dyed the garment with the grapes using stag-horn sumac as a mordant, but the results were the same. The next lesson in the wilderness classroom will be the stinging nettles.

A couple of chunks of Osage orange heartwood await their turn in the dye bath, too. The shavings produce a rich yellow, which will look good on the Osnaburg trade shirt I hand-sewed a few years ago. But that may have to wait a week or two, because waterfowl season is right around the corner.

Trapping season starts a few days after the waterfowl opener. I pulled my traps out and hung them in the rain in preparation for getting them ready to go—like I need another time-consuming project. I go over each trap to make sure it is working properly, before dying and sealing them.

John Tanner talked about his trap line and on a number of occasions spoke about owning or buying traps:

“My mother gave me three traps, and instructed me how to set them by the aid of a string tied around the spring, as I was not yet able to set them with my hands as the Indians did. I set my three traps, and on the following morning found beavers in two of them…” (Tanner, 31)

A number of years ago I had a chance to buy a few old Victor double long-spring coyote traps. At the time, I wanted to re-work at least one of the traps to make it look more “hand-forged.” I still don’t think I have time to do that, but if the weather holds, I would like to set it in a traditional manner, as Tanner might have, and include the set in my predator trap line.

To that end, I pulled one of the old Victor long-springs out and tossed it on the pile with the modern traps. Out of curiosity, I tried to set the trap, but my hands aren’t strong enough. I’m wondering now if I can, “by the aid of a string tied around the spring,” set the trap. This is yet another wilderness classroom lesson taking shape.