Speak Up, Promote and Educate

A muffled yelp broke the silence. Light sprinkles pitter-patted. The leaves, the cedar boughs, the barren twigs overhead were all damp, yet that December morn, in the Year of our Lord, 1797, dawned pleasant and serene.

A thick-branched autumn olive obstructed my shape, but also broke up my view to the right. To the left, two keg-sized oaks offered similar comfort. Heads down, a doe and a summer fawn plodded on the trail that stitched back and forth across the isthmus between the nasty thicket and the huckleberry swamp.

The air smelled cool and damp, warm enough that I could not see my breath. The sprinkles grew to a steady drizzle. Drips formed on the tips of the cedar boughs that sheltered my linen and leather clad being. The Northwest gun rested across my lap, the lock with its precious prime hid beneath my right elbow, under a layer of scarlet wool blanket. 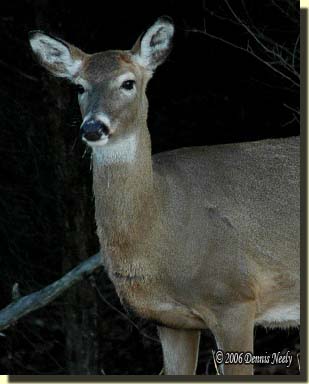 The wild turkey clucked three times, closer, on the ridge’s uppermost trail, a bit to the south. The smaller whitetail pawed the leaves, its dam stood watch, spending more time surveying its back trail than the hillside ahead. The hen uttered a sharp putt. As in the spring, a melodious gobble echoed throughout the glade. “To the north, at the edge of the cedars, beside the doe trail,” I whispered as I kept an eye on the isthmus trail.

Every so often the gobbling turkey offered up a hushed “click” as it walked to the south, following that upper trail, a few paces down from the ridge crest. I dared not turn around and gawk. Whether a long-bearded gobbler or a jake with an infantile stub of a paint brush, I could not say. Only my eyes moved, and then no more than need be.

Another doe’s ears perked up at the farthest visible end of the isthmus path. From the last sound, the gobbler lurked just over my left shoulder, still stalking south. The doe broke into the little clearing, then sidestepped the open scrape. Two younger deer scampered after, frolicking as if trying to catch up. They ran ahead.

With the appearance, the summer fawn perked up, then turned to the west. The three youngsters rendezvoused. The first older doe looked south, the second north. The first doe took the lead, and the others followed, single file. I watched until they were out of sight. The clicking bronze ghost was well down the ridge by then. I had to struggle to hear him, then all went silent again.

In a few minutes, a blue jay started jaying behind me, not loud and frantic, but steady and consistent like they do when they want to hear themselves. I realized my muscles were tensed. After a couple of deep breaths I eased back against the cedar’s trunk.

I knew that sound, and my heart sank. Over the ridge and down the hill another hunter sat nestled in the boughs of two downed cedar trees, or so I thought. “Jay! Jay! Jay! Jay!” the blue-crested watchman’s alarm came as expected.

The drizzle became a steady rain. My head turned slowly left, then right in anticipation of a buck crossing over the ridge, seeking sanctuary in the huckleberry swamp’s impenetrable tangle. But creamy-white tines never broke into view. In about ten minutes, I heard the pitiful imitation of a bobwhite’s whistle. I whistled back, got to my feet and prepared to leave.

A Question of Reliability

“Did you snap caps before you loaded?” I asked.

“No, should I?” he said as he furrowed his eyebrows and scrunched his nose. At that moment, I think he remembered my comments from the night before.

This brief exchange is becoming all too familiar, enough so that I fear mishandling the first load in a clean, black powder arm might be hurting the use of traditional-styled front-loading guns for “muzzleloader only” hunting seasons. The concern for modern hunters in the midst of a discussion about period-correct pursuits might seem misplaced, but many seasoned traditional black powder hunters entered through that door.

Over the last couple of years, variations of this conversation have become commonplace at the outdoor shows we attend. We just returned from displaying at the Michigan Field & Stream/Outdoor Life Deer & Turkey Expo held at the Summit Sports Complex in Dimondale. Some guests have never seen or spoken to a traditional black powder hunter, and on the other end of the spectrum, some have enjoyed the pastime for 30-plus years. So, as one might expect, questions and comments cover a broad range of topics.

Partway through Saturday, I realized I made a mistake by not keeping track of the number of questions or comments related to “misfires.” We talk with so many people that I can’t remember who asked what, but the gentleman that left just prior to that revelation was typical.

This particular guest is an avid inline advocate now. He started with a .50-caliber percussion Hawken-style rifle from a recognized manufacturer. The gun was purchased by his father in the late 1970s or early 1980s for Michigan’s muzzle-loading deer season. The father killed several deer with his Hawken rifle. The rifle spent a while in the back corner of the father’s gun safe before being passed down to his son.

The tale of woe began with two snapped caps on a “trophy 10-point buck.” “The gun went off after the buck was gone,” the 50-something gentleman said with an air of disgust. “The same thing happened the next season. Those guns are totally unreliable. That’s when I bought my (brand name) inline.”

“Did you snap caps before you loaded?” I asked…

Most people store their muzzleloaders barrel-up in a gun safe. Due to the corrosive nature of black powder, or black powder substitutes, many folks use ample oil after a thorough cleaning. With time, the oil makes its way to the breech: in percussion guns it settles in the flash channel, and in flintlocks it rests on the breech plug and sometimes finds its way to the touch hole. This problem seems worst with guns used once a year for a December deer season.

But managing the first shot is just as important as paying attention to how the fifth shot is handled with four “10s” on the paper. And in both situations, the caveats remain the same: each gun is different, and the user must spend range time to determine what works best in a particular muzzleloader.

At the show, I explained to the woeful hunter that the normal pre-loading sequence is to wipe the excess oil from the bore with a dry patch or two, depending on the gun. For percussion ignition systems like his dad’s rifle, I told him to find a safe location (a designated “blow-out” area at a range), point the muzzle down a few inches from a blade of grass and fire caps until the cleared bore utters a distinctive, hollow-sounding “thunk” and the blade of grass moves. The best and most consistent accuracy often comes after firing a fouling shot, followed by a spit patch wiping. After that the bore and flash channel are ready for the first loading.

“I didn’t do any of that,” the fellow said, tipping his camo baseball cap back on his head.

“That’s why the gun fired on the third cap,” I said. “The first two burned the oil out, and I’ll bet the discharge sounded weak and punky.”

“I think it did,” he said. “I was too upset to pay much attention. I know it did on the second buck.”

“Your black powder charge sucked up the excess oil at the breech, leaving you with less than a full charge to burn.”

Before I move on, I feel compelled to discuss flintlocks, too. A patch or two is needed to wipe the excess oil from the bore. I like to let a second patch sit on the breech plug for a dozen or so seconds to soak up whatever oil collected there. And as an aside, in humid conditions, like shooting at the National Muzzle Loading Rifle Association’s primitive range at Friendship, it is not unusual to have a “little worm” of black goo slither from “Old Turkey Feathers’” touch hole after sitting out a relay or two—again, it all depends on the particular bore’s nuances.

A quick inspection of the touch hole will tell if it is plugged or not. If there is any question, a priming wire or vent-hole pick will settle the issue. Some hunters leave a tooth pick, whittled peg or quill in the touch hole to eliminate oil build up.

A number of traditional hunters I know like to burn a pan of powder. Afterwards, they wipe the pan and frizzen with a dry patch. “Old Turkey Feathers” doesn’t need that, but it does require a fouling shot—the first round ball never hits point of aim. When the “thirty-point buck” stands 30 paces distant is the wrong time to wonder where the death sphere will hit.

Now all of this knowledge should come from repeated range experience, but in our instant gratification world, that doesn’t happen—especially with modern hunters trying to get a few extra hours of woods time. Unfortunately, for so many it is “load and go,” and the end result is that unmistakable “POP!” of a cap.

And that is where we, as traditional black powder hunters, must step forward as defenders of, and ambassadors for, the arms of our forefathers. Who better to explain why a traditional-styled muzzleloader failed to fire? The words need to be offered with kindness, respect and understanding, for no one knowingly loads a muzzleloader’s first shot with failure on his or her mind. To the contrary, each hunter expects the cap to snap, the muzzle to belch fire and thunder, and the trophy 10-point buck to fall over dead. But when that doesn’t happen, the traditional-styled gun’s perceived lack of reliability is confirmed and they become converts and disciples of the inlines.

The natural inclination is to keep quiet, to keep to ourselves, but our silence is hurting the sport and worse, I believe we are inadvertently putting our foot against the very door that opened up this glorious pastime to so many.

Speak up, promote, and educate, be safe and may God bless you.

5 Responses to Speak Up, Promote and Educate