What happened to the shot?

“I hunted a lot,” Jeff Wacker said. “It was late October, during archery deer season. Fall turkey season was on, too. Any chance I got I was hunting for deer, when I got up in the morning before work, and at night after work.” Jeff is an avid traditional archer, and that made my pestering a little easier—now he is also a traditional black powder hunter.

“One morning I was just beat,” he said with a sigh as he leaned back on the sofa on his screened-in back porch. “I told Sue (Jeff’s wife), ‘There’s no way I’m climbing up in a tree stand. I’m going turkey hunting.’ Every morning I’d see a flock of toms come off the ridge to the east. They’d come down through the woods and head to the river like clockwork.

“I went out to the barn and loaded up the French ‘D’ per the instructions of my mentor. It was still dark when I headed back to the woods to intercept the turkeys. It started to get light and the birds started cackling. A half hour after daylight here they come, five of them, but this time all hens. In the fall you can shoot hens, and I thought to myself ‘these will be better eating than a tough old tom.’

“I had a hen walk in. I stepped off twenty-two paces afterwards. My paces are about a yard, well within the effective distance of the load I had in the French ‘D,’ or thought I had. She presented herself—a broadside shot, head up. I took aim. The gun went off, but it didn’t recoil as much as it usually does with the hefty load of shot.

“I was using a measure and a half of #5 lead shot over a card and two fiber wads,” Jeff said with another sigh. Jeff custom built his 20-gauge fusil several years before this sojourn. “I’ve found that load patterns best in the French ‘D.’ I topped it off with a thin, over-the-shot card. 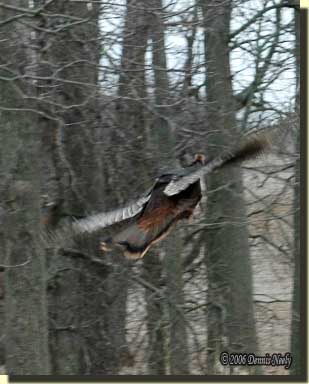 “I shot and the bird went right down. I smiled and didn’t bother reloading. I stood and started to walk over to retrieve my bird. I got halfway there and she jumped up and flew away, off toward the river. I watched her, taking note of the direction she flew. I walked that way. I thought I would find her dead on the ground. Where she stood I saw there were no feathers on the ground, and as I walked I started thinking about the gun not having the right recoil,” Jeff said. He never found the hen.

“I relayed what happened to my mentor. His first words were: ‘Did you put shot down the barrel?’ I answered with a smart-alecky: ‘Yes I did! I remember measuring it!’ He said one of two things happened, either I didn’t put the shot in or the over-the-shot card wasn’t seated properly and I lost my shot out of the barrel walking out in the dark. That had to be what happened, and if it was, I hit the bird with the fiber wads, knocked it over and stunned it for a minute,”

Conscientious hunters, modern or traditional, give serious attention to misses. The second guessing begins when the game jumps up and flies to the river bottom or runs off into the thicket, all the while showing no sign of injury. Hours pile up as the search widens, and it is during those agonizing times that the mind replays the moment of truth over and over and over, looking for the minutest of clues as to what went wrong.

In the last few weeks, I have run across three other incidents relating to lost or loose shot columns, which brought to mind Jeff Wacker’s hen—plus I have a story of my own to add. In all three tales, like Jeff’s, the shot was lost prior to pulling the trigger. One gentleman found part of his #4s when he vacuumed the carpet in his truck. I can imagine what that sounded like.

Among traditional black powder hunters who love smoothbores there seems to be a tendency to treat the loading of a round ball different from that of shot. Perhaps this is due to the versatility of these guns and the need to develop an efficient load matched to the wild game pursued. But regardless of one’s mental attitude, all projectile loads in a smooth-bored black powder arm must be treated with equal respect and loaded with the same care and caution.

Near the beginning of any presentation on black powder safety there is always a serious discussion about “short-started loads.” A short-started load refers to dumping powder down the barrel followed by a projectile that is not seated solid on that powder charge (Fadala, 98). The exact understanding of the physics involved is still in question, but the result is the same: when the powder ignites, the resulting pressures do not move an up-bore load, but will instead cause the barrel to bulge, or worse, explode in the shooter’s hands.

It is important to note that the term “short-started loads” is all inclusive, rather than referring to the phenomenon as “short-started round balls,” because this dangerous condition can exist with any projectile or projectile combination.

A common preventative measure for short-started loads is to mark one’s ramrod so it is easy to see when the projectile is seated firm on the powder, but that method is not foolproof. For example, my wiping sticks have a quarter-inch orange band painted around the rod. When the bottom of the band is even with the muzzle, my competition round ball load is seated properly. But since I use a variety of loads and compete in matches that require both round ball and shot, I have to be aware of where that orange band is supposed to be in relation to the muzzle for the different load combinations.

In the case of shot, the shot column must be kept tight once it is seated. Most folks use the thin over-the-shot cards, but whatever material is used, it must fit the bore with enough friction to hold an ounce-plus of shot from coming loose or spilling out during the course of a hunt.

When discussing the loss of Jeff’s shot, I asked if he remembered using an over-the-shot card. I have seen individuals, myself included, get ahead of themselves and forget the card, only to hear the shot rattle down the bore when the barrel was tipped down to prime. After much soul searching, one of the other traditional hunters said he didn’t remember seating a card, and after looking, found the remnants of the missing shot on the ground near where he loaded.

I next asked Jeff if his ramrod tip was flat or concave and if he started the card on edge or if he pushed it flat with his finger once it was in the bore. If a ramrod tip is concave, or hollowed out to fit a round ball’s spherical shape, and the card is not flat in the bore before it is run to the breech, the card might stay somewhat vertical and “knife” into the shot column, rather than seating flat.

Likewise, if the ramrod tip is flat, which Jeff’s is, and the card is not pushed flat to start, the tip’s flat face can fold the card’s thin edge over on the way down the bore. Once a few pellets escape on the folded side, the weight of the remaining shot can tip the card in the bore as they spill out. In a worst case scenario, only half of the shot escapes, leaving the rest of the pellets loose, creating a short-started condition.

Maintaining a tight card to bore fit is also important when shooting a double-barreled shotgun. The recoil from firing the first barrel can sometimes dislodge a poor-fitting card, in effect short-starting the second barrel.

In addition, cards fit better in a fouled bore than in a clean tube, especially one where a film of oil remains. After some experimenting, the fellow with the lead-lined truck carpet discovered this was his problem. If a card slides down the bore too easy, further care and examination is warranted.

An hour into a duck hunt, I moved “Old Turkey Feathers” off my lap, set the butt on the ground and held the muzzle upright. I heard the bismuth shot rattle. I dumped the prime, pegged the touch hole and pulled the wiping stick from the ribbed thimbles. The over-the-shot card was an inch or so off the shot. I reseated it and added a second card. A short while later I shucked the smoothbore up and down. The shot column was loose again. I walked out and went home. 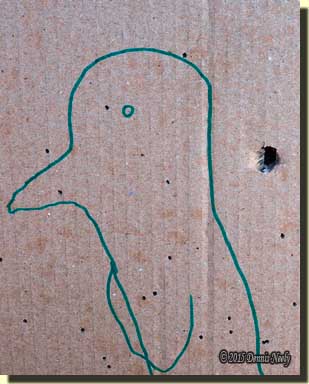 A month before I bought a bag of new cards—same gauge, same supplier. I pulled the two cards from the morning’s duck hunt. They came out too easy. I measured the diameters with a dial caliper, then dug around in the muzzleloading cabinet for a sample of the old cards. The old card was eight-thousandths bigger. The manufacture had “upgraded” their tooling and the old dies were “not to spec.” I exchanged the 20-gauge cards for 19-guage, and that solved the problem.

Jeff is still not sure what happened that morning, but subsequent trips to the patterning board with the French “D” added one piece to the puzzle. At least one of the double fiber wads hits the cardboard targets hard, sometimes penetrating clean through. He is convinced one or both wads hit his hen and knocked her down. Now if we can just figure out what happened to his shot?

Take care loading any smoothbore, be safe and may God bless you.

2 Responses to What happened to the shot?