In the First Five Minutes…

Crows shrieked near the meadow. All week substantial flocks, bolstered by young spring hatchlings, cawed at imagined villains with hopes of stirring to flight a real adversary, such as one of the young barn owls from the far ridge or the fledgling red-tailed hawk that perched on a red oak’s uppermost twig some days ago.

A warm southwest breeze rattled the tall cottonwood’s heart-shaped leaves as the sun’s brilliant glow crested the cedars and slipped among the mighty tree’s branches. Damped by dawn’s heavy dew, the air smelled humid and thick with a faint hint of drying prairie grass. 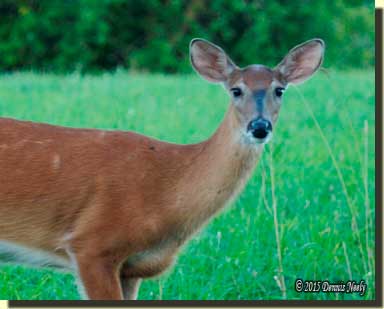 A hundred-plus-paces distant, a young doe’s head appeared in a stand of wild carrot. Two hoof-falls produced her neck and shoulders, clothed in summer’s cinnamon hair. She paused, turned her head south with a noticeable jerk, then stared upwind in search of the source of the scent that did not belong in the clearing. A single crow cawed; a second offered a harsh response, then a brief silence followed.

Goldenrod sprigs, perhaps a third yellow and interspersed about the clearing’s edges, swayed in an easy, rhythmic motion. Milkweed stalks, not yet topped with lavender flowers, stood stiff. Two cardinals, one visible on an outstretched cottonwood limb, “whit-tsued” back and forth as light streaks stretched across the moist, shimmering prairie grass.

That morning’s thin haze lingered, blurring the dark, shadowy spaces that define the depth and mystique of the cedar grove’s hilly terrain. Overhead, patches of azure broke through the wispy white clouds that rushed to the north with an unknown urgency. Four or five black crows winged over the tips of the hardwoods that populated the last hillside before the big swamp without uttering so much as a single squawk.

A dash of sunlight now caressed the cinnamon-colored doe’s thin neck as she glanced uphill. Perchance the flailing crows attracted her attention, too. She looked straight ahead into the grove, took two steps, then nuzzled the ground. With her head half-raised, she sniffed a clump of lacy-white wild carrot, then plucked a small flower. Unconcerned, she walked behind a bushy autumn olive and out of sight. Thus, the first five minutes of a splendid August morn ticked away, deep in the Old Northwest Territory, in the Year of our Lord, 1796.

Not long ago, I had a casual conversation with a modern archer regarding a fine buck he had taken last fall. His tale started with the buck stepping out from thick cover. He told of drawing his “blank-brand” bow, holding the “blank-brand” mechanical release against his cheek, and the “blank- brand” arrow he used with the “blank-brand” broadhead. The tree stand, camo and scent products all came with brand names that I assume I was supposed to recognize.

Thankfully, I don’t get cable or satellite television. We barely get electricity here at the North-Forty, but I now and again see outdoor programs in the hotels we stay at when on the road. And based on that viewing, this fellow sounded like his hunting persona was a conglomeration of hosts from the modern shows, or should I say “infomercials,” I’ve seen.

When I asked about notable happenings on the rest of the hunt, he was at a loss. He possessed no knowledge of the trees or bushes that grew in his locale. He could not name one bird or animal that he saw that day, nor could he describe the weather conditions, other than it was “a cloudy evening.” In essence, the details did not matter, only the point-total of the buck’s rack and the products that made the taking of that buck possible.

That conversation came to mind as I drove home from the Contemporary Longrifle Association Show, held at the Lexington Convention Center in downtown Lexington, Kentucky. Last weekend’s show was the first I have attended, although several friends and acquaintances have insisted, “you need to go” for the last five years. They were right.

At any point in time, I have a mental list of nagging questions that seem to elude documented answers. On the drive down, I ran through the list, prioritizing the answers that might lurk on the tables at the CLA Show. As questions came to mind, they wove their way into the conversations that my wife, Tami, and I had, usually in the form: “Keep your eyes out for…” Tami is great at spotting hidden gems and pointing them out to me.

For example, back in May a pile of Northwest gun components ended up on the work bench. The breech plug was set and the barrel was inlet into the maple stock. The lugs had been soldered on, but not finished. As I shaped the lugs with a file, I started questioning if the mortices for the barrel tenons passed through the web or if they were hidden on the original guns. That question never arose on the last Northwest gun that I built, but that is part of the learning process of such projects.

When such a question arises, I hit the books. With no definitive answer, I started calling gunsmiths and collectors that I know. Some said “Yes,” and some said “No.” At the National Muzzle Loading Rifle Association’s Spring Shoot, I spoke with several noted collectors and/or experts.

Most had no experience with Northwest trade guns and therefore offered no opinion. The Northwest gun is an animal unto itself, or so it seems, much like the Model “T” is an outcast to car collectors. One collector went to the back wall and took down an English fowler that he described as “more of a traded piece than a fowler.” That gun’s mortices were through the web. 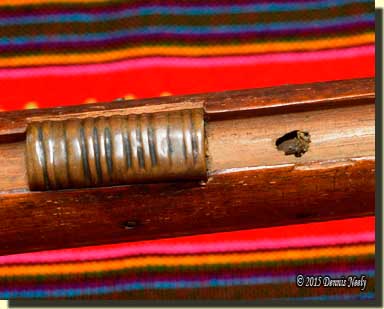 An 1863 Barnett Northwest trade gun with what appeared to be a mortice worn through from use, rather than cut through by the maker.

At the CLA Show, William Basco was gracious enough to allow me to photograph and handle a couple of later Northwest guns and a chief’s grade model. Based on his experience, he felt some did and some didn’t, depending on the maker.

Several other English fowlers displayed through mortices, others did not. One plain fowler was so heavily used that the walnut forestock was worn away, exposing the ramrod. That gun was gone when I came back to photograph it—lesson learned.

I came away from the CLA Show with a reasonable answer to the mortice question—either method is correct, depending on the gun’s actual maker. And I found partial answers to at least three other questions, as well.

For traditional black powder hunters, the details matter, especially when viewed from an historical context. On the surface, whether a barrel’s tenon mortice passes through the web or remains hidden seems inconsequential to downing a fine buck or taking a dandy gobbler. But that tiny, nagging voice deep within every living historian knows when a detail goes uncorrected and thus does not take advantage of the best primary documentation available.

The traditional hunter’s ever-elusive goal is to come as close as possible to an 18th-century reality that can never be achieved to 100-, or 95-, or even 80-percent assimilation of “what was.” Alas, a basic principle of this glorious, addictive pastime is that we will always fall short, but with that principle follows the principle that we can only apply our best understanding of what is period-correct at that moment.

There was no fine buck or long-bearded wild turkey at stake on that August morning in 1796, only a joyous, although quick, jaunt back to the Old Northwest Territory near the headwaters of the River Raisin. I suspect the modern archer would have found the trip quite boring. Hearing distant crows, watching goldenrod and wild carrot plants sway, and taking note of a far off doe make for lack-luster video presentations.

But traditional black powder hunters view that circumstance from a different perspective. After sitting down, the brass lead holder skimmed across the page leaving gray impressions of the details of the texture of life in the 18th-century backcountry, with no brand names necessary. It’s amazing how much there is to see and experience in the first five minutes of a time-traveling adventure…