Buffalo-hide moccasins stalked north, in the lee of the wind, off the ridge crest. A young doe stood in the shadows where the cedar trees give way to the hardwoods on the hill’s western slope. Thirty paces or so distant, the young whitetail did not realize danger lurked so near. Ten paces beyond her an older doe faced away. She, too, had no inkling as to the state of her jeopardy. But a few calculated steps to the east put the ridge’s rolling crown between the deer and the backwoodsman who stalked on.

Farther down the ridge, three wild turkeys perched high in a good-sized red oak. The trio fidgeted as the thinner branches swayed, engulfed in the pre-dawn murk. Not a single “putt” or “cluck” came from those three as death’s dark shape passed.

Beyond the turkeys’ vision, up from the tangled wreck of a once magnificent outward-spreading oak, the woodsman paused for what he thought was a buck’s guttural grunt. Two steps to his right shrouded the woodland tenant in the boughs of a red cedar tree. A thumb traced anxious circles on the jaw screw of the Northwest gun.

Seconds flowed into minutes. Eyes only surveyed the glade’s graying depths, but saw nary a hair. Then a modest gust rubbed a barkless, leaning spire against a living partner. The resulting guttural creak, sounding somewhat like a fiddler’s bow dragged across a dry cornstalk, brought a smile to the woodsman’s face and a whispered admonition: “Old ears!”

Not long after, frost-damped moccasins circled downwind of a moss-covered, half-rotted tree top. The remnants of a dead autumn olive bush scattered the tree top’s center with an abundance of brittle branches. A leather-clad toe scuffed away layers of brown oak leaves near the skeleton’s shattered butt end. The wool bedroll, guided in place by a portage collar’s broad forehead strap, settled in the nest. The woodsman took a knee, then sat cross-legged with the smooth-bored trade gun resting on his blue wool leggins. 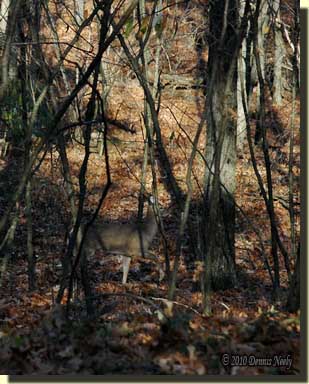 A blue jay flitted to a nearby hickory tree. A single gossamer thread, strung between an autumn olive sprig and a cherry sapling’s lowest branch, flickered, vanished, then shimmered again. An oak twig with a head-sized cluster of brown leaves hung from an unseen branch and rocked side to side with little regularity. A gray grapevine, anchored to a maple’s upper-most limbs, swung in the wind, appearing, disappearing, then appearing again from behind the tree’s trunk. And off to the left a hunk of bark, discarded from a lifeless oak, sprawled across some brush as it imitated a fine buck’s back.

Fox and gray squirrels came and went as did a few sparrows and the occasional irritable blue jay. But the brown, pointed ear did not belong. That white-tailed deer was a forest tenant in good standing, but the movement of her ear did not belong in the woodland setting that surrounded the tree top and thus betrayed her arrival.

A snout, a dark eye, an ear twitch, patches of fur and finally a shoulder passed through viewing spaces in the underbrush’s tangled web. Legs walked behind a broad cedar tree, then the mature doe’s body emerged from behind one of the glade’s many curtains. She plodded with modest caution: head up, looking about, ears checking, nose testing. With the wind at her rump, she had no inkling that death watched but twenty paces distant…

“Limit your own movements,” I whispered to the young man, “but spend your first few minutes studying the subtle movements that belong in this area.” I tapped him on the shoulder, whispered “Good Luck!” and started a steady stalk back up the hill and over the ridge.

The young man had never killed a deer before. His unsuccessful attempts spanned several seasons dotted with a smattering of “close, but not quites.” His plight came to light from a casual conversation and eventually led to him sitting in a prime location on the North-Forty. Usually I will sit with a hunter new to the property, but he wanted to take a deer on his own so I respected his request. I sat him in an area that offered safe shooting in all directions out to about sixty yards. In a non-period-correct manner we exchanged texts when I was clear of any potential danger. Even in the dark, the path uphill was easy; all I had to do was follow the glowing enthusiasm splashed on the cedars.

Later, the young man said he had a chance at a first-year seven point, but I think the buck caught him off guard, stepped in the open then angled away too quick. He never shouldered his shotgun. “I never saw him, then he stood there,” I think he lamented. We were walking south along the big ridge at that moment. We had time, so I sat him down just off the ridge and started another “movement seminar.”

Any given plot of ground, forest or fen, 18th-century or modern, is characterized by constant movement. Some movements “belong” and some do not. One of the secrets of blending into any historical simulation, becoming one with both Nature and the long ago, is learning what movement belongs and what does not.

This process applies to both still-hunting and taking a stand, as I did that morning. I often tell traditional hunters to think of their effective distance, the maximum distance where they can consistently place a humane, killing shot, as the hem of an invisible, huge hooped skirt. Take a step forward and the front of the skirt advances two or so feet, and likewise the back follows. One step to the side swishes the skirt sidewise, and so on. 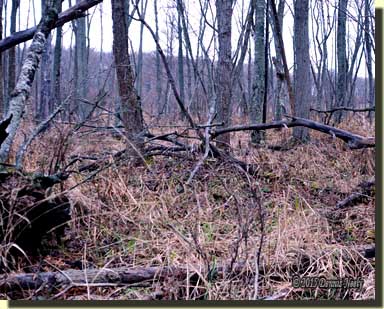 As I settled in, I reminded myself of my effective distance markers, paced off two decades ago when the tree top first tumbled to earth. After noting physical changes to the hillside since my visit the fall prior, I started assessing all discernible movements: the blue jay, spider web, suspended oak twig, swinging grape vine and a host of other “normal” flicks and flutters.

The primary concern is evaluating and mentally cataloging each movement. It sometimes takes a half-dozen glances before I “overlook” these little teasers, but once established, subconscious acceptance frees my mind to concentrate on movement that does not belong. And I never look for a whole deer, always parts or pieces: a pointed ear, a snout, an eye, patches of fur or lower leg.

Depending upon a location’s physical attributes, my eyes are not bounded by the effective distance. After the initial assessment, the process continues to the visible limits of a given area—the sooner a quarry is spotted the better.

The same methodology applies to a still-hunt. Although the importance is often overlooked, the pauses give the woodsman time to evaluate the forest, to catalog the motion-makers that belong and look for movements that don’t belong. A single step or two forward changes the angle of perception. A tree or underbrush might block a flagging leaf. Two more steps and the leaf’s action takes on a whole different dimension. The still-hunt’s pauses help compensate for such changes. There is, after all, a reason why a doe or buck or wild turkey pauses on its journey through the glade.

One Response to The “Movement Seminar…”