Waiting on the Next Trade Blanket

“Scu-reeeeee…Scu-reeeeee,” a red-tailed hawk cried as it banked its wings and drifted south over the River Raisin’s bottomland. A blue-wool-clad leg stepped over a rotted oak trunk. Two fox squirrels chased their way off the ridge crest, spewing dry leaves with no apparent concern for stillness. The second appeared more into playing than the first.

A pileated woodpecker swooped low, then rose straight up and gripped the barkless side of an oak’s dead limb. It cocked its red topknot from side to side, then up and down. A blue jay clenched the lowest branch of a fine shagbark hickory, growing tall a dozen paces east. A woodland pause seemed in order on that pleasant, late-October afternoon in the Year of our Lord, 1796. 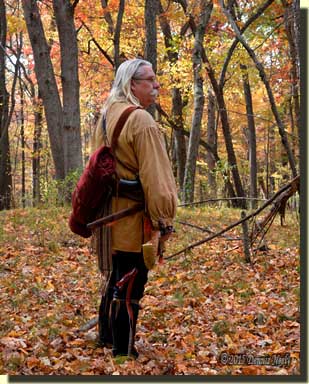 The two bushytails treed as the red-tailed hawk circled back over the forest. The first hugged a modest branch festooned with browning foliage. A few moccasin steps west would have brought the little beastie within the realm of the anxious death bees, sequestered tight in “Old Turkey Feathers’” breech. But a fresh wild turkey dinner sounded better than squirrel and dumplings that day.

Dusty buffalo-hide moccasins pressed south, bent on a white oak treetop downed that spring in a mighty thunderstorm. The still-hunt’s course wandered through the tiny valley. Tree-to-tree the stalked ascended the hill. At the crest, I weaseled my way into the entwined branches, seeking the top’s main crotch.

My left moccasin cleared away the leaves. The bedroll, a common burgundy trade blanket bound with a leather portage collar, slipped over my head and found its way into the back of the nest. I leaned the Northwest gun against the big limb, but before I sat I pulled the butcher knife and sliced away three small twigs. With the knife back in its leather sheath, I sat cross-legged and eased the trade gun over that big limb.

An earthen trail crossed over that ridge between the trunk and the top. Every other night or so, a flock of wild turkeys used that path to reach an old monarch of a roost tree with broad-spreading limbs, two ridges to the west. The afternoon before found me a fair distance from the white oak top, but still within eye sight. Those seven birds did not use the trail, which boosted my confidence in bringing a wild turkey to the table.

Out of unconscious habit, I fiddled with the knife’s handle to make sure it was all the way back in the sheath. That knife dropped out on a pheasant hunt one evening, and I was lucky to find it just before dark. One doesn’t want to be backtracking in buckskin moccasins with an angry knife loose on the path…

As I sat hidden within that white oak top, I realized I had used that particular butcher knife off and on for over twenty-five years. It was the “small butcher knife” blade made by Green River Knife Works, which I think was part of the Russell Knife Company back then. I bought it off a trade blanket in the primitive camp at Friendship in the late 1980s. I fashioned the handle from a cutting of wild cherry taken from the North-Forty and I used warm boiled linseed oil for the finish.

I’m heading off to Friendship this next weekend, and I’m starting to get excited. I can’t stay long, and most of the days will be spent “working,” as Tami says. But one of the joys of wandering through the primitive camp is rummaging through the trade blankets.

The merchandise has changed over the years; it’s not the same as it once was. The Internet and the various forums or social media “for sale” pages garner the best prices for the more valuable trade items. That said, there are still great treasures waiting on trade blankets—and “the hunt” is often more fun than “the find.”

If one has a solid, usable “kit,” the pounds and pence don’t burn the pocket quite as much. And with a well-researched persona, a shopper becomes all that more discerning when it comes to a purchase. But in recent years, items for the grandchildren have found their way onto the shopping list. And then there is the “happened upon find of a lifetime” that might be lurking on the red four-point one camp over… 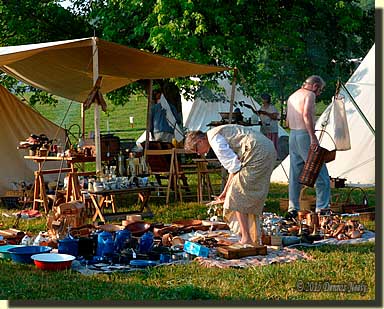 Years ago I acquired the components for Tami’s .40-caliber southern mountain rifle at Friendship. She was shooting competition with “The Silver Cross,” her cut-down chief’s grade trade gun, and a Hopkins and Allen .36-caliber under-hammer buggy rifle my daughters learned on. I knew she needed a nice flintlock for the primitive matches, and I planned to work on that project the following winter. As luck would have it, her competition gun came to the fore in a hurry.

The first afternoon at Friendship, I happened upon a “priced to sell” maple stock, rough carved in the southern mountain rifle pattern. A couple of worm holes just ahead of the lock panel and a bad bark inclusion at the nose put that stock in the bargain/almost-firewood pile. She likes the simple lines of a plain gun, so I thought “that’s a start.” I wrapped the stock in a spare towel and tucked it out of sight in the pickup.

Someone else had a .40 caliber Green Mountain barrel that had been cut down, something under 36 inches. I knew the shorter length barrel would be easier for Tami to handle, plus that took the bark inclusion out of play. After a little dickering, the barrel joined the stock in the gold towel—what an appropriate color towel, too.

A gun builder getting out of the trade had the correct breech plug snuggled in with a dozen others displayed on a dirty white towel. The butt plate was at the bottom of a greasy, well-worn cardboard box of goodies. The trigger guard was in a pile of “seconds” steel castings over in the “Sheep Sheds;” the air bubbles almost polished out. The plain steel thimbles were an easy find. I had the ramrod blank and a steel tip. I bought the lock from a good friend who spent his evenings assembling and tuning locks for a known vendor.

As I said, it’s harder now to find trade blanket treasures, but not impossible. Many times I don’t find the items that carry a high priority on the want list, but then a good smoothbore barrel peeks out from under a petticoat and a couple of rusting tin lanterns. And that’s the fun of this version of a traditional black powder hunt—not knowing what might be waiting on the next trade blanket.

Stop me and say “Hi” at Friendship, be safe and may God bless you.

One Response to Waiting on the Next Trade Blanket