Chocolate cake sounded good for breakfast. A half piece seemed sufficient, followed by a few plump, fresh strawberries. The cake is a week old, nursed along in “halves” and “quarters” and a few “slivers.” I ate this breakfast with a salad fork, one bite at a time, right out of the cake dish, but please don’t tell my wife, Tami. I don’t want her to think I’m a total savage; an older, somewhat unruly teenager is acceptable, I suppose.

I thought about getting a paper plate, but my arms were too tired. Wrestling a ten-foot, heavy-duty, pole-type chainsaw trimmer in eighty-degree humidity taxes a 1790s time-traveler’s physical being; two trailer loads of brush and debris or a full tank of gas run through the chainsaw is my limit, sometimes less.

A favorite long-sleeved, off-white, light denim shirt, one that will keep pesky deer flies at bay, stuck to my hide.  The shirt was soaked with sweat down the arms, around the neck and in the center of the back. Long, creamy autumn olive shavings and sawdust added a clingy layer of its own.  With the tractor parked and the saws put away, I unbuttoned the shirt, shook it hard and slung it open over the deck rail to dry. I’ll wash it with several other work shirts and two pairs of fraying blue jeans, kept just for working in the woods.

Sweat dripped from the tip of my pony tail and hit halfway down my back as I splashed cold water up and down my arms. An old bath towel did little to quell the flood; my body perspired, trying to cool down despite turning up the fan in the office. Maybe in twenty minutes or so… 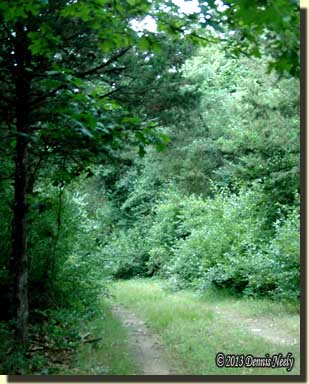 I sighed as my fingers started dancing on the keys. I had hoped to record a great 18th-century adventure, but instead of doing what I wanted to do that morning, I did what I had to do. That seems to be the curse right now: “want to” has to wait while “have to” gets taken care of.

This summer’s humid heat coupled with a minimum of rainfall provided perfect growing weather for autumn olive. The access roads on the North-Forty are choked full of arched-over sprigs. I fought this invasive growth spurt in early April, but the cooler temperatures made it easier to cut back the onslaught. The autumn olive thrives on the heat, and I wither. Doesn’t seem right, but that’s life…

At any rate, that trimming session pales in comparison to a great 18th-century adventure—a foray that amounts to another installment of life but does little to spark a new blog post. My desk is littered with notes and reminders that all fall into the “want to” category. The best I can do is peck away at the stack—a little here, a little there…

I don’t remember how I happened upon it, but a couple of weeks ago a new anthology of captive narratives arrived in the mail. North Country Captives: Selected Narratives of Indian Captivity from Vermont and New Hampshire was compiled by Colin G. Calloway and published by the University Press of New England with a copyright date of 1992.

I don’t know how I missed this book, but such discoveries are a part of the fun and mystique that surrounds living history. The anthology contains the stories of eight New England captives from 1745 to 1780. The geographical region is too far east for my Lower Great Lakes captive persona, but the thought of gathering additional insights is always exciting.

I’m partway through the narrative of Nehemiah How, captured in October, 1745, near what is now Putney, Vermont. A few pages now and then offer a pleasant respite from “have to” tasks. To help drift back I usually loop “I Will Find You,” the captive love song from the movie “The Last of the Mohicans,” on continuous play.

Lydia Boggs’ name came up in a discussion with Tom Lounsbury, a noted Michigan outdoor writer, who dabbles in black powder upland game hunting. I keep pestering Tom to don some linen and leather and chase his beloved ring-necked pheasants in a true, traditional manner—making allowance for the fact that this fowl species was nowhere to be found in the Old Northwest Territory in the 1790s. 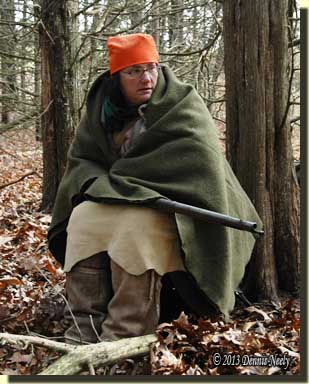 Lydia Boggs was the longtime friend and possible love interest of Lewis Wetzel. Talking with Tom about Lydia resulted in an “Ah Ha!” moment. My mind raced back to a different discussion from a few weeks ago. I created another yellow note to add to the “want to” pile.

When I got off the phone, I expanded upon my scribbling. In the midst of that prior discussion, I reached behind the desk, pulled out a book and thumbed to a tab that marked a passage that shed light on a part of the topic we were talking about. Other passages followed, and three of those passages dealt with a woman’s role during a fort siege. I missed the significance, but I can correct that oversight.

I did the same for Lydia; I took a few minutes to rummage through the notes and passages I have that tell of her life and circumstance. I expect to revisit Lydia, and other frontier women that perhaps we, as traditional black powder hunters and living historians, have overlooked.

The other afternoon, again for a few moments of rest from a “must do” project, I resurrected a pair of knee breeches I have been trying to complete since last February. I stitched for about an hour, mostly on the sewing machine, but some hand-sewing. All that’s left is to add the knee bands/casings and hand-sew a dozen or so button holes.

Since May I’ve wanted to get back to tramping in the glade with my trading post hunter persona as a companion. That version of the historical me took a back seat to Msko-waagosh for longer than I anticipated. The development of any new persona takes a lot of research and effort, more so than just stepping over time’s threshold with an old friend of thirty years.

When I last engaged in a simple pursuit with Samuel the Trader’s hired hunter, I noticed some of his clothing was pretty ragged. Patches cover tears and rips, and the fabric’s weave on one thigh was disintegrating. The goal was to have the knee breeches ready for an outdoor show, but that just wasn’t possible. Now I hope to have them ready to go by early September.

A new 1790-era reproduction of a Northwest trade gun sits beside the workbench, about eight-percent complete. I spent a few minutes with the gun a week ago, and I’ve found time for two short work sessions since. It was a parts set I acquired a number of years ago, and I decided to finish it last November. The story of this flintlock smoothbore is about the same as the knee breeches. Obligations with a greater priority won out.

Oh, and I have parts for another Northwest gun waiting in the wings—a parts kit someone else started, but decided not to finish. I bought that smoothbore about four years ago. That Northwest gun is up next…

And as an aside, I am always looking for Northwest gun parts or kits that are loitering in a closet. If you have such a gun or know of someone with an orphaned Northwest gun kit, please check out the “Wanted” tab in the navigation bar above and contact me, please.

So I have no great 18th-century adventure to retell this week, just more autumn olive to trim and cut. Dear reader, as John James Audubon used to write, I hope I have not disappointed you. Please don’t misunderstand; I have plenty of traditional hunting stories sequestered on journal pages, but nothing that moves me today. Rather, I am plodding along, trying to squeak out the time to finish a number of projects before the beginning of hunting season, which isn’t that far away.

Sometimes progress appears slow for a traditional black powder hunter, but when I review the list of what I have accomplished in the last month, I realize I have taken at least one more moccasin step on the path to yesteryear. The few minutes stolen from the “have to” tasks are gratifying, pleasurable and in small measure increase the historical understanding of my beloved era. Can any traditional black powder hunter ask for more?