“Grrr…Rrrreerrr…ssskkktttt…” A growling, spitting protest filled the darkened glade. “Rrrowwl…ssskkttt…urrrr…” The second outburst sounded defensive. Three rounds marked the wilderness altercation between two unseen raccoons, then the forest returned to a divine, pre-dawn silence. A solitary mosquito buzzed about; the year was 1796.

On that calm, clear, humid September morning, the air carried no discernable or distinctive aroma; instead it smelled warm, moist, heavy and a tad stifling. A bat fluttered at the edge of the clearing. It veered right, then left, heading out over the center of the huckleberry swamp. Twice it returned, circling a modest maple with an erratic course before disappearing. A quick hand to a linen sleeve killed a mosquito.

A robin flew from the south, entered the clearing, then swooped up into a red oak. A second chirped a sharp “Cheeri-leee, Cheeri-leee.” Closer, a robin winged across the clearing and perched in a different red oak. It stayed for two, maybe three seconds, uttered nary a sound, then hustled back to the hardwoods that bounded the south side of the thin ribbon of open ground. Another distraction landed above an eyebrow, its last act as the death toll rose.

“Ucckk…ucckk…” A wild turkey spoke next, its tones muffled and distant, somewhere beyond the west bank of the River Raisin. It was then that I realized the sky turned a gray-blue while I relished dawn’s first melodies. Little mattered as I sat engrossed in my woodland Eden. Despite the irritation of persistent mosquitoes, an aura of peaceful content surrounded the white oak that served as a resting place in the midst of my journey back to yesteryear.

To the west, well beyond the Raisin and through the spaces in the tree tops, visible bits of a solitary lavender cloud caught my attention. As I watched the cloud, a dark shape moved sideways, high up in the tree tops. It hopped twice, then twice more as it skulked farther out on a curving branch. Two upward puffs blew a mosquito from the end of my nose.

The medium-sized hawk flapped three or four times, vanishing in the thick leaves above the branch. It appeared too small for a red-tailed hawk. I limited swats for fear of giving away my presence, but even then, two more mosquitoes joined the body count.

Not long after, a black streak dropped from the tree top. A soft “thud” followed. The demise of a young squirrel was my first suspicion. My gaze returned to the clearing in hopes of spotting the doe and two fawns I came upon a few days before. As I watched, a marsh hawk flew into the clearing, gaining altitude with each stroke. A chipmunk-sized creature hung lifeless in its talons.

Movement again caught my eye. This time a plump raccoon ambled along the lower deer trail at the base of the far hillside. There was no telling if this was the aggressor or the object of the pre-dawn quarrel, but this forest tenant marched with a mission in mind. Given the hour and the heat, perhaps the raccoon marched on with the coolness of a hollow log or rotted trunk in mind.

With great reluctance, this humble woodsman scrambled to his feet, using the empty Northwest gun as a makeshift crutch. Like the raccoon, the business of the day awaited. After a twisting stretch, my damp elk moccasins turned about and struck off to the south, bent on a quick visit to the wigwam. Up the hill, by the fork in the wagon trail, those same moccasins stepped over time’s threshold…

“You need to take a few minutes and go to the woods,” Miss Tami said before she pulled out of the driveway. My usual response is a recitation of the morning’s projects, but today my answer was a quiet “maybe.”

My wife and I have a morning ritual. I carry her bags to the Jeep and stow them in the backseat. I hold her door as she crawls into the pilot’s seat. As I hand her the seat belt, I recite the checklist of her “must have” items for that day’s work. After I close the door she rolls the window down and I give her a “Good bye” kiss. I wave as she moves down the drive, and she waves back before closing the driver’s side window.

On the walk back to the house, I started humming “I Will Find You,” the love theme from the movie, “Last of the Mohicans,” sung by Clannad. The words started drifting through my head, “No matter where you go, I will find you…” It took all of five steps to convince the historical me to get dressed and head to the woods. First light glimmered. If I hustled I could enjoy the wood’s pre-dawn awakening and still start work on time, or close to on time.

As it turned out, I was rinsing Msko-waagosh’s silk-ribbon-bound wool breechclout by 7:30 am. Attending to my alter egos’ clothes, both the returned white captive who spent his youth as an adopted son of the Ojibwe and the hired hunter for a small trading post, was on this morning’s “must do list.”

This weekend, September 9th to 11th, marks the 30th annual Woods-N-Water News Outdoor Weekend, held at the Eastern Michigan State Fairgrounds in Imlay City. Miss Tami and I will have our 1794 River Raisin trader’s camp set up, and we are both looking forward to talking with show guests about living history and traditional black powder hunting.

Like our morning ritual, I have a checklist that I follow for each outdoor show, and as the week progresses, more and more of my time is spent packing and preparing. Washing and/or mending clothes is always high on the list. Checking and preparing accoutrements ranks right up there, too. I tend to gather clothes on the bed in the quest room and assemble the accoutrements and trade goods in a pile near the back door. And for me, as each item gets checked off the list, the excitement grows. 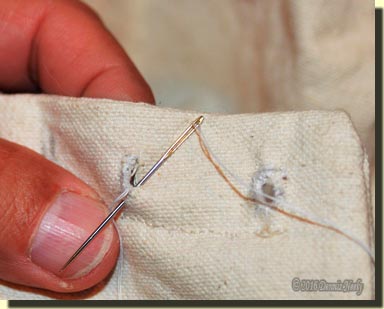 The post hunter’s new knee breeches may not be ready by the start of the show on Friday. If not, guests can watch me sew on buttons and stitch around button holes. Knee breeches are one of the most difficult garments to make. On a number of occasions, I have taken the breeches along with the idea of stitching away at some event, but it just hasn’t worked out.

I got all excited when I was down to the buttons, button holes and finishing some of the hand sewing. I worked on the eyelets for the back gusset adjustment the other evening. I stitched as I listened to a webinar. Fortunately, when I concentrated too hard on the stitching and not on the substance of the lecture, I could go back and re-listen to the speaker’s explanation. But the knee breeches will get done when they are done. Sometimes nurturing patience is an underlying take-away from a wilderness classroom lesson.

In late August, I had the opportunity to spend two nights on Mackinac Island at the former home of Magdelaine La Framboise. The Harbour View Inn now includes the original structure within its main hotel accommodations and the “homestead” has obviously been remodeled over the years. But staying in the house, walking the grounds and visiting her grave at St. Anne’s next door proved quite an exhilarating experience.

As we walked to the house from the ferry dock, I said to Miss Tami, “Maybe we’ll be lucky and see the ghost of a fur trader tonight.”

Her response was quick and to the point. “That might be ‘lucky’ to you, but I’ll pass. I’m sure Madame has long since received her heavenly reward, being the Godly woman that she was,” Miss Tami said as she tried to stifle a grin. More on that visit another time… 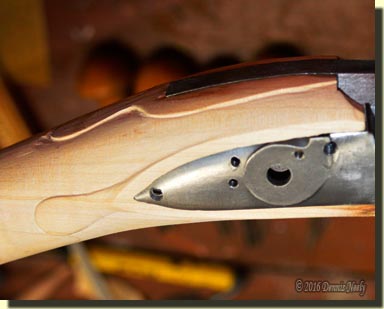 I spent some time laying out the lock panels, tear drops and beaver tail for a reproduction Northwest gun based on a North West Company example by Robert Barnett, dated “1789.” That gun is moving along, again, subject to time available. An hour here and an hour there roughed out the lock-side panel and the beaver tail around the tang.

Again, patience is the watchword on such a project. To save time in the future, I started making templates as I go along, and I am documenting each step as I re-familiarize myself with the building process. The end goal is a new Northwest gun for Msko-waagosh.

So for today, my hat’s off to Miss Tami for encouraging me to take to the woods, if only for a short jaunt. I surprised myself when I said “maybe” instead of “I’ve got too much to do today.” That “maybe,” coupled with humming a few measures from “I Will Find You” was all it took to send me off for another adventure in my 1796 Eden.

One Response to A quiet “maybe…”