A finger flipped twice. “Arrkkk…ark,” again the gravel-mouthed hen uttered two soft tones. The finger traced an imaginary line indicating the doe trail that wandered into the red cedar trees. The west face of the hogback ridge, just up from the sink hole, grew silent as the elk moccasins of the lady took three steps toward the path.

The stalk progressed with more haste than caution, but the distance was not that great. The lady of the woods’ buckskin, wrap skirt slipped by a small, purple-switched raspberry bramble without catching. Two dozen steps into the shadows a large cedar tree with no lower branches loomed. A hornbeam grew to the south of that tree. Several grape vines spiraled up into the old cedar; the vines swung free about the tree. Dry, brown oak leaves and green, wispy blades of grass covered the ground.

This forest maiden settled in the leaves, behind the cedar tree. A different hornbeam served as a backrest. The short barrel of “The Silver Cross,” her cut-off, Chiefs-grade, smooth-bored trade gun pointed in the direction of the sink hole. That old cedar tree offered a commanding view of the trails that came over the rise and down into the hidden valley below her.

To the south, just inside the tree line, a trading post hunter cleared away the leaves behind a smaller cedar bedecked with a multitude of dead, grey branches and sat in the nest. The seasoned woodsman chose that tree to put his frontier wife in a direct line with the hen’s last utterance. A few minutes passed. The hen did not call out when she reached the isthmus, if she traveled that way.

The hunter’s fingers dug in the deer-hide shot pouch that hung at his side. A hunt-polished turkey wing bone emerged and went straight to his lips. Two gentle draws on the flat end imitated the hen’s last clucks, “Arrkkk…ark.”

With a deliberate motion, the woodsman worked the trail-worn pouch’s flap up. His fingers stood the bone against the bag’s front seam. A Northwest trade gun rested across his buckskin-clad legs. The smoothbore’s muzzle pointed back to the sunlit clearing. The hen was not his bird to take.

Two fox squirrels chased down and around the spreading red oak at the top of the rise. In the middle of the valley another scampered through the dry brittle leaves. A gray squirrel added more noise, as did a blue jay that felt compelled to scream out from its perch above the bramble thicket at the far end of the valley. If the hen chose to come straight on, the steps of its scaly legs could not be detected among the sounds of the glade. 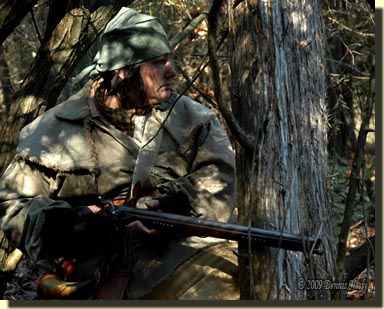 Well after the blue jay ceased, bronze feathers glistened in a patch of sunlight, to the south of the bramble thicket. A gray head bobbed about, peering into the autumn olives that dotted the valley floor. At first, the lady of the woods did not see this hen. The distance was a hundred paces, or more. When she caught the movement out of the corner of her eye, she remained still. The hen walked behind a large hemlock bush. The woman’s hips shifted south. The trade gun’s short barrel eased to that side of the great cedar.

Minutes ticked away, then a wild turkey’s head popped up beyond the crest of the little rise. The bird exhibited the same caution as the first and soon disappeared in the underbrush. This hen was closer, maybe sixty paces out. The Silver Cross’ muzzle eased back to the north. The lady’s thumb rested firm on the jaw screw…

On that fine fall morning, Tami’s shortened trade gun barrel proved of great advantage. The reduced length navigated back and forth around that red cedar tree with a minimum of motion. A long-barreled smoothbore like “Old Turkey Feathers” would have required more movement, and with that back-and-forth action, a greater chance for detection.

The Silver Cross has the look of a sporting gun or English fowler with standard trade gun modifications as described by Charles E. Hanson, Jr. in The Northwest Gun. As was the practice with the early Chiefs-grade guns, the smoothbore kept the fine fowler lines, but sported the serpent side plate and the ribbed brass thimbles (Hanson, Charles, 41).

The only deviation from the norm is a cut-down barrel of 26 inches. The file marks are still visible on the muzzle face, by design, along with charring from the fire that required the reduction in length. The two remaining thimbles were moved for serviceability, leaving open inlets at the original locations.

Tami’s introduction to trade guns was a shooting session with Old Turkey Feathers. She struggled with the barrel’s length and weight due to her arthritis. I loaded the gun with a light load, comparable to a 28-gauge bore. She tried both round ball and shot and saw the potential for a wild turkey dinner. Overall she enjoyed the experience, but she couldn’t take careful aim without fighting the barrel’s leverage on her joints. Without mincing words, she said, “The barrel needs to be shorter.”

With that statement, I immediately thought of one “J. Long” and his Voyages and Travels of an Indian Interpreter and Trader, published in 1791. In recent years, this treatise has come under some scrutiny and question. When the Silver Cross started to take shape that was not the case, and despite the questions about the validity of Long’s actual service in the fur trade, the account is at worst plagiarized from another trader’s life experience.

According to Long’s narrative, an Indian arrived at his trading post and asked for credit of “forty skins” until spring. Long questioned the man’s hunting ability and the poor prospect of making payment in the spring. The would-be debtor stormed back to his canoe where he plotted the trader’s demise. Long takes the tale from there:

“My man observing them, watched them very narrowly, and saw the Indian endeavouring to file off the end of his gun, to make it convenient to conceal under his blanket; having shortened and loaded it, he returned with it hid under his dress. This transaction being a convincing proof of his diabolical intention, I directed my man to stand on one side of the door, and I took my post on the other, waiting his entrance into the house. Just as he passed the threshold, I knocked him down with a billet of wood, and taking his short gun from him, beat him so much that we were obliged to carry him down to his canoe, where his family were waiting for him, and ordered them all off the ground, threatening that in case of refusal his canoe should be instantly broken to pieces, and his family turned adrift… (Long, 115)”

From time to time, either Tami or I have been told “canoe guns never existed” after that individual saw the Silver Cross. In recent years, I have personally handled several original Northwest guns and at least one Chiefs-grade trade gun that were cut down. All still showed some variety of mill/file/cut mark from the bobbing. The only variable is in what century the cut-downs took place.

A week or so ago I had the opportunity to photograph a noted gun builder crafting a period-correct arm based on an original. He is also considered quite knowledgeable on French trade guns, and has cut at least one down that I know of—I have those photos, too. Anyway, the subject of cut-down trade guns came up in the course of an afternoon’s worth of hand work. The first words out of his mouth were, “Never say never!” This is good advice for any living historian.

The discussion turned to “barrel ends” found at historical sites like Fort Michilimackinac, Fort St. Joseph and fur trade locations of historical significance. Some of these sections show damage, like the trade gun that burst in John Tanner’s hands (Tanner, 60), and others are just random lengths of barrel found through archeological excavation.

About ten years ago I visited Fort Michilimackinac. A professor of archeology sat at the edge of a square hole, troweling the northwest corner in the hot sun. I asked her if she had any interesting finds. After talking about a few beads and a copper shard she stated that the week before she found a section of barrel. I asked to see it, and she said, “It’s bagged, labeled and off site by now.”

I was bummed, and she realized my disappointment when I explained my passion for traditional black powder hunting and the history of the 1790 era. She stopped troweling and checked her notes. After converting her centimeters to inches, I determined that segment was about ten inches long. Her notes spoke of tool marks where the metal was cut. Documentation on why these cut-offs frequent military posts remains a mystery, other than most fur trade posts employed a blacksmith and/or person with experience repairing the arms of the time.

The gun maker laughed at the story, and we commiserated about that lost opportunity at the fort dig. Between the two of us, we shared knowledge of almost a dozen cut-downs—and I believe that is just the beginning. I suspect there are other documented tales involving cutting down a common trade gun; I just have not run across them, yet.

There is a practical side, learned in the wilderness classroom, to a shorter barreled trade gun. Tami has proven that over and over. On another occasion, she took a fine buck after turning ninety degrees and weaving the Silver Cross’ barrel around three cedar trunks—again, just one situation among many.

On the range, the shorter barrel patterns shot as well as a longer-barreled, smooth-bored trade gun. The only difference we’ve found is the Silver Cross’ love of #5 lead shot; the bore does not pattern #4 or #6 quite as well. With round ball, the limitation is Tami’s personal shooting ability, which is why she limits herself to about forty yards and under for deer. Her arthritis has kept her from competing the last few years, but when she did shoot for score the Silver Cross put her near the top of the pack.

But as the gun maker and I talked on that humid July afternoon, there appears to be a growing intolerance among living historians to accept documented passages that contradict the popular opinions passed about as fact on social media, over the campfires at a rendezvous or even at re-enactments. This is the basis of the now-common belief that “canoe guns never existed.” Perhaps it is the name, “canoe gun,” that needs to be changed, or maybe the listener’s perception of living history needs adjustment? At any rate, following the sage advice, “Never say never!” will lead to a tolerance of other researchers’ opinions, acceptance of contradictory primary documentation and perhaps a wee bit of 18th-century enlightenment.

Slip the bonds of today and venture back to yesteryear, be safe and may God bless you.