Temptation teased. Three broad green blades of prairie grass rolled between sweaty palms. A greasy, blackened thumb pressed the tangled ball into the Northwest gun’s muzzle. The young turkey’s gray pate again popped up in the deep grass and yellowing milkweed stems that surrounded the base of a bushy red cedar tree. 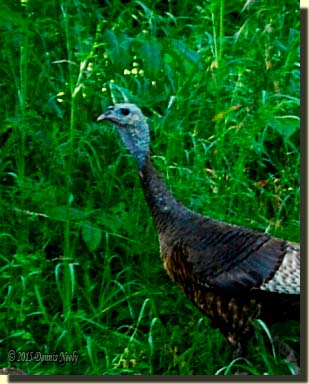 The fowl’s head jerked side-to-side, inquisitive and uneasy.  A piercing brown eye slashed away at the woodsman who stood in the open, perhaps eighteen human steps distant. A dirty buckskin pouch half-filled with hefty lead shot lay within easy reach of the backcountry hunter. Temptation teased…

With a knowing smile, the woodsman placed a shiny round ball sprue up on the grass wad. Rubbing hands, in full view of the wild turkey, formed two more blades into a thinner wad. The same thumb pushed this new wad over the lead ball. A wooden wiping stick eased the wad-ball-wad firm on the black powder with one simple stroke.

Holding the Northwest gun’s muzzle up, the woodsman turned to the west. The turkey’s head dropped into the safety of the grass. The woodsman shook grinned as he walked to his own grassy depression and sat. The sharp English flint came to half-cock with a loud “click.” Black powder granules dusted the smoothbore’s pan. The frizzen seated with an audible “snap.” Instead of offering the hunter’s prayer, “A clean kill, or a clean miss. Your will, O Lord,” the woodsman thought, “That youngster had to hear that.”

Orange sparks arced from the muzzle as the thunderous roar echoed up and down the big swamp. Beyond the white, drifting smoke cloud, after a half-second delay, the round ball struck cardboard with a “thwap.” The gray-pated head never appeared again, but still, temptation teased…

Twice this week I’ve been blessed with joyous time at the shooting range—and twice I’ve seen a wild turkey within the Northwest gun’s effective distance. I say that temptation is teasing, but there is no thrill in taking a turkey that ventures close to the shooting range to investigate the repeated claps of strange-sounding thunder.

For me, the thrill of plunging headlong into a simple pursuit set in the 1790s far outweighs bagging a wild turkey. I did not dress “period-correct” for either shooting test. I should have, and I thought about it—no, I really wanted to, but I didn’t. In hindsight, I believed there wasn’t sufficient time, plus the needed mindset was not there. So, by conscious choice, this traditional black powder hunter did not cross time’s threshold, which by default rendered the wild turkeys non-existent in my 18th-century Eden.

Instead, these jaunts were centered on learning more, still in the setting of the wilderness classroom, about a particular trade gun and how it performs with natural wadding and a round ball.  Not that long ago I wrote about John Tanner’s skill with a firelock in “Beyond the Northwest Gun’s Effective Distance.”  As so often happens, one passage in a hunter hero’s memoir keeps rumbling through a living historian’s mind. Tanner’s statement, “We fixed a mark at a distance of one hundred yards, and I shot first, placing my ball nearly in the center,” has caused its share of sleepless nights.

The full context surrounding this sentence includes the note that the other shooters involved in this match feared/respected Tanner’s marksmanship. And after he won the match, he noted that “Not one of either party came near me…” (Tanner, 100) The word choice leaves little doubt that Tanner knew his own ability, given the limitations of his gun.

From the outset, I loaded “Old Turkey Feathers” with a patched round ball. In the late 1970s that is how most smoothbores were loaded. The patched ball was an appropriation from rifle shooting. There were a few shooters who came from British battle re-enactments who used paper cartridges, but most of them switched to a cloth-patched ball to compete. Despite this loading method’s lack of historical background, the accuracy of a patched round ball is hard to beat.

In the 1980s, using a patched round ball, I felt comfortable taking a shot at a deer out to 80 yards. I had “a few secrets” gleaned from watching national championship shooters at Friendship. Thoughtful range practice taught me that the round ball started to “tail off” at 85 yards with my deer hunting load. The tail off started at 75 yards with a lighter, target load. Much like a Hoyt Wilhelm knuckleball (I know that dates me), wind resistance can push the ball in any direction. 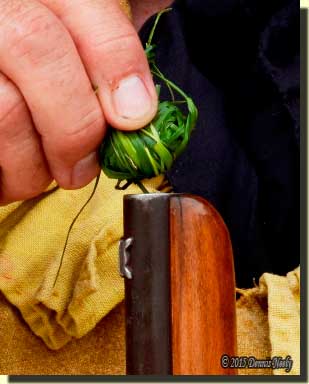 The trading house inventories and the narratives of the woodsmen known to hunt with a smoothbore make no mention of cloth patching material. X-ray examination of several recovered 18th-century smoothbores show various configurations of natural materials used as wadding. Armed with that information, I started loading with leaves and grass for wadding, or as neighbor Jeff says, “Compost.”

The purpose of my latest range testing was to press beyond the 50-yard effective distance established by my abilities and the ballistic performance of leaf/grass wadding in Old Turkey Feathers. When designing this wilderness classroom lesson, I chose to work my way out to 100 yards in 10-yard increments. I usually shoot from a sitting position with my left elbow resting on my left knee so I chose to use that rest to minimize the human error factor.

To start, I opted for the same target load used in the earlier tests that determined the 50-yard effective distance. Each shot was loaded the same, regardless of distance, with a keen eye toward maintaining a consistent load. I selected several clumps of broad-bladed green grass that appeared identical and counted the blades as I rolled them into wads.

I also duplicated the sight picture at each distance, rather than raising the front sight in relation to the barrel’s back flat as the yardage increased. At first I found this aspect a bit surprising, because with years of experience shooting the same gun, I automatically increased the windage as the distance increased.

As expected, the greater the distance, the greater the drop in the death sphere. But the roundish groups that characterize shots out to 50 yards soon became “linear.” The impact points formed a rough horizontal line across the target face, spreading wider as the distance grew. This line accentuated the drop and pointed out the error of minute changes in sight picture, given the lack of a rear sight.

The drop at 60, 70 and 75 yards (I added this distance, because when I hunted with a patched ball, I practiced at this distance and have a lot of data recorded) amounted to 8 ½, 9 and 9 ½ inches, respectively. The linear groups measured 8, 9 and 10 inches.

At 80, 90 and 100 yards the drop progressed from 12 ¾ to 16 inches, and the groups jumped from 14 inches to 26 inches in width. These results were not surprising, given the tail off of the target load after 75 yards with a patched round ball. They also confirm the imperative need for establishing an effective distance to affect a clean, humane kill.

During the last session I took time to up the black powder charge 10 grains, then I shot a group at 80 yards. The width tightened from 14 inches to 10 inches, and the drop decreased by almost three inches to 9 inches below point of aim.

I thought through the night’s shooting results, and jotted down questions as I packed up. I have other wad combinations to test, to say nothing of adjusting the black powder charge and perhaps trying a different projectile size.

I often say, “If you tell me what we are hunting, I’ll have a load for it.” Such a statement is based on almost 40 years of traditional black powder hunting experience. Like any living history endeavor, there are always more wilderness classroom lessons than time to experiment. If I am to share a sense of kinship with John Tanner, I need to concentrate more range time on loads suitable for longer distances.

Those test targets consumed almost two prime beaver pelt’s worth of round balls. To say the least, I came away from the two sessions feeling exhilarated and filled with enthusiasm. There is little doubt that Msko-waagosh can never best John Tanner’s marksmanship, unless he was shooting a rifle that day. But like that inquisitive wild turkey, the temptation teases…

Give traditional black powder a try, be safe and may God bless you.