The Slow Stalk Back…

A bending, hesitant foreleg hinted. A second rising, then falling hoof removed suspicion. Despite the hazy cloak of small snowflakes filtering earthward, the deer’s faint outline became all too obvious in the snow-clad tangle of twigs and cedar boughs. Another shape appeared, then a third. 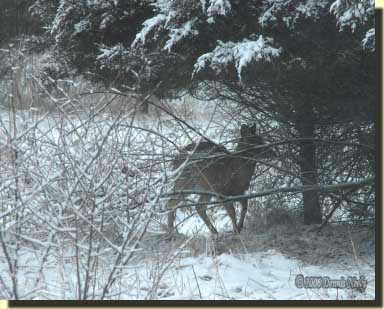 A weary woodsman’s right shoulder leaned against a stout red oak on that damp-smelling evening of early December, in the Year of our Lord, 1796. The trunk’s furrowed bark pressed hard against the faded linen outer shirt, more from unconscious frustration than plan. The three deer milled about, twenty-plus paces upwind of a clump of cedars that was supposed to be that night’s lair.

Despite the white trade blanket draped over the backcountry woodsman’s left shoulder, he was just as vulnerable as the brown-haired deer. Moving beyond that oak, at least until the trio passed, was not possible without certain detection. No alternative remained but to sit beside the oak.

A trail-worn moccasin eased the snow to one side when all three heads were down. In time the returned white captive who spent his youth learning the woodland ways of the Ojibwe settled to the ground, sitting cross-legged with his right shoulder against the oak’s trunk. Msko-waagosh, the Red Fox, made sure the white blanket did not betray him against the oak’s almost-black bark. The does continued to scrounge and browse, showing no intent of moving on before darkness fell.

A solitary deer meandered through the open hardwoods along the hilltop to the south. It disappeared behind a knoll, then walked out into the little valley to the southeast, still upwind. This deer pawed the snow away at the base of a big red oak, turning first to its right, then to its left as it looked for acorns. Several times it glanced at its back trail, but another deer never joined it.

The snow stopped a bit before dark. An owl hooted well to the east, but in the quiet serenity of winter it sounded as if it was perched no farther than two trees distant. Faint stars twinkled as the gray clouds withered away overhead. All at once, the three deer by the cedar clump at the edge of the River Raisin’s bottom land raised their heads and began walking northeast, single file.

The little deer in the valley lingered until the moon broke through the thinning haze. It bounded twice, then loped east and vanished over the little rise. Believing he could now move undetected, Msko-waagosh got to his feet, shook the snow from the soiled, wool blanket and began the slow stalk back to the warmth of his canvas-covered wigwam…

The intrusion of modern game laws dictated the taking of an antlered buck that day. As always, measured compromise weaves such details into the fabric of any period-correct pursuit. In essence, the choice of killing a buck or a doe became invisible within the context of December of 1796.

The true test that evening was to remain undetected in the forest proper. Glimpsing the bending of the leg, no matter how slow and deliberate on the part of the young doe, changed the complexion of that still-hunt. All movement on my alter ego’s part had to cease. There was no advancing to a more secure lair; the stout red oak was the only wilderness fortification available.

Further, that oak tree offered a minimum of cover. At the time, Msko-waagosh knew the chance of being discovered by the three deer, and later by the single deer, was increased, rather than decreased. No other alternative existed.

Moving tree-to-tree in a snow covered stand of hardwoods without being seen by the other forest tenants is a near impossible task in and of itself. But such a challenge makes the quest all the more fun and rewarding, when it works. And if a doe snorts, flags and flees in the opposite direction, well that is a fun and educational experience as well. After all, I had no intent to take a doe, and as it turned out, there were no bucks lurking anywhere close to those deer.

The examples in the presentation focused on the trading post hunter persona. The choice of clothing, based on primary documentation, was an integral part of the discussion, and that included the scarlet, four-point wool trade blanket. The talk centered on deer hunting, in part because the red blanket presents too many challenges for sneaking up on wild turkeys.

Sitting reduces a human’s deathly shape from an upright, two-legged threat to a softer, rounder bush-shape. Sitting also cuts the bold blob of color in half and adds deep wrinkles for shading and contrast. Keeping in mind that deer research suggests the animal sees red as a shade of gray, half the amount of gray is better than all of it standing tall and proud. Likewise, sitting within or behind a natural structure—a downed tree top, a clump of cedar trees or a stand of thick grass—minimizes the intrusion even more.

But the question still remained, “Do you know what you look like to the forest tenants.” I offered a solution to that question based on my own practices over many seasons of still-hunting: “Look at yourself,” either before or after a circumstance presents itself.

Now that always brings puzzled looks, but what I do is study the forest from the perspective of the deer, turkeys, geese or squirrels. I simply position the blanket, outer shirt or other clothing in the location as it would appear if I was actually sitting there. I then wander the deer trails, crest the hills, walk through the valleys and circle the chosen lair from all directions.

This exercise often leads to humbling revelations. “Oh, my,” gets whispered a lot. The same experiment applies to the standing-upright part of any still-hunt. Three saplings tented together along a trail or two saplings leaned against a bush or tree with a hunting shirt and a red blanket added emphasize just how vulnerable a woodsman is when still-hunting.

The end result is a constant re-evaluation of how a backcountry hunter traverses the forest and where and how he or she chooses to take a stand. This self-examination leads to improvement of woodland navigational skills and a more thoughtful consideration of each step taken within any 1790-era sojourn. With time, the living historian learns to become a part of the glade, rather than a fancy-dressed dandy out for a sunny waltz.

And that was the case on that evening in 1796. The first victory was Red Fox spotting the deer before they spotted him. White was the predominant color in the river bottom, so he wore a white trade blanket. Once the deer appeared, there was no moving on. The stout oak was the only cover, flimsy as it was.

From observed experience, he knew sitting in front of the oak with the white blanket draped over his body would look unnatural. Instead, he chose to draw upon that woodland knowledge and sit to one side with his right shoulder against the tree and the blanket blending with the background around the tree.

As the snow fell it coated the blanket and the exposed linen shirt. In essence, Msko-waagosh’s being melted into his surroundings. Only his squinting eyes moved. When nightfall arrived, he remained undetected and waited until all the deer moved through the area. When the moon appeared he stood up and kicked snow into the leafy nest he occupied that evening, erasing any remnant of his existence at the stout oak.

Red Fox smiled as a cold snowflake melted on his cheek. With the same care that brought him to this evening ambush, he commenced the still-hunt back to his wigwam…