Fall’s melody played upon the treetops. Yellow maple leaves fluttered earthward. A single wing bone touched pursed lips. Two kissing breaths passed up the hollow tube. “Arrkk…arrkk.” Two abrupt clucks drifted on the gentle breeze of a early-November morning. Greenish-yellow poplar leaves flapped like the wings of a wood duck that does not wish to take flight. The forest floor was not yet arrayed with gold and red patches—the weather being too mild.

Several robins frolicked at the west edge of the grassy clearing, three trees distant. Bugs flew in and out of sunlight spears. A fox squirrel chattered somewhere on the tiny opening’s far side. Another fox squirrel uttered a soft, pitiful bark close by, but where?

A gust carried the aroma of a warm and damp hayfield, laced with a mystic hint of angle worms. Lazy minutes ticked by. Across the clearing, a fox squirrel hiked up a tall, slender red oak, the one beside the forked wild cherry. A lone drag on the wing bone sent out another quiet “Arrkk…”

Little claws scratched bark, but again, their direction remained undetectable. The squirrel sounded near, but the muffled noises seemed to come from the south, then the north. Experienced eyes scanned the treetops, searching for a wisp of cinnamon-colored hair—more as an exercise than from desire. Wild turkey was the meal of choice that day, in the Year of our Lord, 1763. 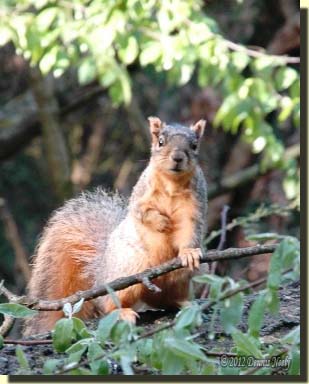 The far squirrel jumped to another oak branch, spiraled around that limb and came to rest on a rotted stub. It basked in sunlight and chattered away. Four or five scratches later a plump fox squirrel plopped onto the oak leaves beside the tree that hid a backcountry woodsman.

As it happened, this forest tenant’s crinkling nose ended up inches from the forestock of a worn fusil de chasse. Dark eyes grew big. A bushy tail flipped and twitched. The returned white captive squinted, but remained motionless. The startled fox squirrel turned to its left, bounded under an autumn olive bush, then scampered into the clearing.

In time, Mi-ki-naak, who spent his youth among the Ojibwe, got to his feet, surveyed the area, and still-hunted to the north, staying to the shadows while skirting the clearing. The Snapping Turtle’s moccasins followed the doe trail beside the huckleberry swamp.

A red oak, encircled with stunted, half-browsed scrub oaks looked like a fine location for the next try at garnering a hen turkey’s attention. Coon leavings, some fresh and some old, eliminated that tree as a possible fortification. His course moved east, then veered south until he came to two maples that grew a foot apart.

The sun was beyond noon-high. A couple hours remained before the planned rendezvous with Lt. Lang of Joseph Hopkins’ ranger company. Mi-ki-naak unbound a trade blanket, pulled it about his shoulders and sat cross-legged with is body between the two tree trunks. The long-barreled fusil pointed to the south, the direction he hoped a bird might come from.

Fifteen or so minutes ticked away. “Arrkk…arrkk.” The wing bone’s submissive clucks appeared to stay within the bounds of the wooded hillside. To the north, a fox squirrel chattered. Another answered to the south. A bronze-feathered turkey never clucked and never came to investigate…

On that early November morning, a new being set his moccasins upon the North-Forty’s soft earth: Mi-ki-naak, the Snapping Turtle. This was an alter ego’s first excursion to 1763, a first attempt at time traveling to Lt. Lang’s historical destination.

The vast majority of my traditional black powder hunts have been solitary adventures. I am no stranger to period station camps with multiple participants or engaging in a fair-chase hunt with other like-minded individuals. 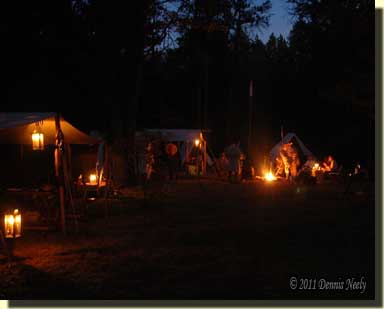 For example, memories from the camp in the pines at Swamp Hollow will always be dear to me. The sight of a breakfast fire’s smoke hanging in the tree tops, the smell of a clay pipe lit with a glowing ember, the taste of goose breast seared in bear fat or a full moon beaming down on the ghostly shapes laughing around a dancing fire are among the reveries of this glorious pastime that match those described by Joseph Doddridge.

On that occasion, and a few others at Swamp Hollow, a half-dozen canvas shelters held traditional hunters from 1750 to 1840—a 90 year span. The disparity of time periods didn’t seem to matter to any of us. The subject never came up in campfire discussions. I only became aware of the potential historical conflict in hindsight, after the creation of Msko-waagosh, the Red Fox—the returned white captive from the mid-1790s.

“Measured compromise” usually assesses the impact of a modern intrusion upon any given historical simulation and applies an acceptable solution that makes the transgression almost transparent within the confines of the chosen scenario. One of the goals for a traditional hunter is to nurture a mindset that applies measured compromise without conscious thought—except in cases of impending danger. I suppose that is why the differences never became an issue. Perhaps the awe of the moment overpowered the trespass. 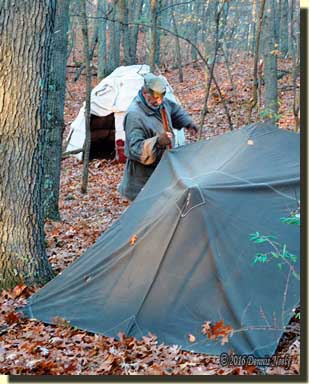 A couple of years ago Lt. Lang erected a temporary shelter in the same woodland bowl where Msko-waagosh’s wigwam sits. As that day’s wild turkey chases drew to a close, both personages “returned to camp.” The two time travelers talked about a variety of subjects and shared stories of that day’s simple pursuits. The time warp between 1790 and 1763 yanked me from my 18th-century Eden like a low flying airplane buzzing geese on the River Raisin.

My first inclination was to remain the same character, only thirty years younger. That notion did not fit with the backstory developed for Msko-waagosh. Next I considered a new character name and a swap-out of the Northwest trade gun for a French fusil de chasse. Change the date and you’re good.

A morning deer chase in late November left the Red Fox straddling time’s threshold with most of his body in 1790 and one leg in 1763—Ouch! That test in the wilderness classroom proved the hypothesis flawed and solidified the only reasonable choice: create a new character—do the research and get the portrayal right.

Like the creation of Msko-waagosh, the development of this new persona had to begin from the ground up. For any traditional black powder hunting portrayal, the fictional character must fit within the primary documentation for a person in a chosen geographical location, station in life and time period. I started scribbling down notes and ideas and stuffing them in a file marked “New Persona.”

Lt. Lang centers his ranger persona within a few months of the later part of 1763, scouting and hunting out of Fort Detroit after Pontiac’s Siege.  At the least, my new alter ego had to share that time and location with Lang’s character. This newbie’s exploits might include a year or so before or after the fall of 1763, but when he shared the glade with Lt. Lang, the day and month had to match that of the British ranger. Therefore, the focus time period became the fall of 1763.

James Smith’s captive narrative, Scoouwa, offered the first guidance along with other firsthand accounts, such as The Siege of Detroit in 1763; The Journal of Pontiac’s Conspiracy and John Rutherfurd’s Narrative of a Captivity. Other works followed, shedding light on the material culture of white captives adopted by the Ojibwe during the French and Indian War.

Serious family obligations limited time, but by that November turkey hunt this new persona had an Ojibwe name, Mi-ki-naak, madder-red leggins and a breechclout of the same material. A borrowed trade shirt, an appropriated, natural linen outer shirt, a black silk neck scarf and a green sash fleshed out the meager basics.

A butcher knife and tomahawk that were not associated with any persona “will work for now.” A loaner deerskin shot pouch and powder horn had to “make do.” The fusil de chasse required range practice time, and is a bit different than “Old Turkey Feathers,” but still serviceable for putting meat on the table.

The history and research are not complete, and never will be. That said, Lt. Lang and Mi-ki-naak plied the woods together, seeking wild turkeys and fresh venison. Neither happened, but the scribblings in the Snapping Turtle’s journal pages and those of Lt. Lang all reference the fall of 1763…

5 Responses to Referencing the fall of 1763…