“It’s no wonder Mi-ki-naak has amnesia…”

“Cringe-worthy” best described Lt. Lang’s email. The subject line, “Today 1763,” put his message at the top of my “must read list.” I hate to break the news to the modern world, but living history takes precedence over your perceived crisis of the moment. Family comes first, always, but the constant bombardment of hyped triviality does not sway me—I could care less who the next glamorous guest is on some late night talk show. I’ll either be researching or sleeping.

As living historians and traditional black powder hunters, Lt. Lang and I share primary documentation, swap traditional hunting data and information, and we are on a constant lookout for snippets relative to each other’s research. Thus the subject of his email was no surprise, but the content was. 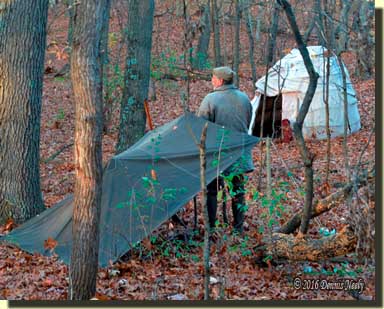 Lt. Lang set up his overnight shelter in the same hollow as Msko-waagosh’s wigwam. From a living historian’s perspective the wigwam is timeless, but the character portrayals are not.

About a year ago, I decided to create a third persona, a returned captive for Darrel’s current bygone era: the fall of 1763. Up until then, we roamed the glade three decades apart. He focused on 1763 and I on 1796. In the field, we each go our separate ways, immersed in a specific history-based scenario. Sometimes we cross paths and sometimes we settle on a rendezvous point where we discuss the events of that morning or afternoon. The time disparity pulls us out of character, at least to some extent.

Along came Mi-ki-naak, the Snapping Turtle. I thought the transition would be smooth, and it has been far from it. I failed to realize how much research I had invested in my trading-post hunter and in Msko-waagosh, which amounts to 40 years of study.

Because nothing exists beyond this moment in a person’s life, what we call “the future,” living historians apply the same restriction to their characters. As a person living, surviving and hunting on a given day two-plus centuries removed from “what is,” my alter ego is unaware of the actual events of tomorrow, what the next week will bring or if he will be around next year, which is 1797. Those happenings are all in the future, and making it through “this day” is all that matters.

That said, the past exists in some form for every person’s life. Because the aforementioned characters center their time-traveling exploits in the Great Lakes region, one would expect they have heard of the defeat of the British garrison stationed at Fort Michilimackinac in June of 1763.

From time to time, I reference the writings of Alexander Henry as primary documentation to support some aspect of my wilderness classroom experiences. I try hard to make sure the passage presents a practical “lessons learned” approach to building a portrayal that is well rounded, believable and authentic. In most cases, a reference to any real player from the past focuses on the hunting experiences of that individual, successful or otherwise.

In everyday usage, the trading-post hunter and Msko-waagosh possess a basic knowledge of the taking of Fort Michilimackinac acquired through oral history recitations of others. That is a reasonable expectation, considering these portrayals exist in the mid-1790s, thirty years after the deception.

However, that caveat is not and should not be the case with the third character, Mi-ki-naak who hunts near the headwaters of the River Raisin in the fall of 1763. Pontiac’s Rebellion is raging all through the region at that very juncture in time!

During the last four weeks the modern world’s demands have consumed every waking minute—most of that time has been dedicated to resolving issues set aside “for the future” last year. Smothered with a “to do list” that I swear spawns at night, Darrel’s email that passed on a posting on social media, at least on the surface, appeared to be a welcomed respite. 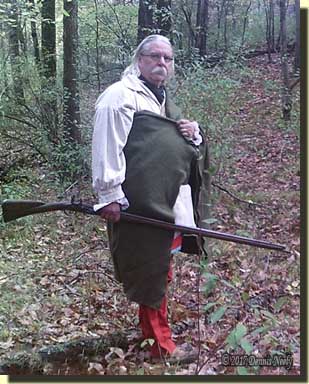 Mi-ki-naak’s first turkey hunt. I know from experience I’ll look back on that day and laugh.

Then I opened the message and read the first line: “A storm was brewing at Michilimackinac…” The posting quoted Alexander Henry’s journal, starting with the visit by Wawatam who tried to convince Henry to leave the fort immediately and travel to the Sault (Henry, 74 – 76).

As I read, I cringed. This was a huge blunder on my part, because in all the hubbub of the modern world, my new alter ego, Mi-ki-naak, failed to recall the significance of that day in his life. And therein was the difference: this new character was based on a year of steady research, unlike the other two. The poor Snapping Turtle doesn’t even have a complete set of woodland attire… “Patience, Grasshopper, patience…” I told myself between deep, cleansing breaths. “This too will pass, this too will pass…”

A 1763 event timeline is in order, but that will have to wait until July. Alexander Henry’s journal is packed for Friendship, with hopes of reconnecting with his ordeal, but with the schedule for that visit, I doubt that I will get any time to read. Yes, that was a big sigh you heard. Oh, and I just received another “urgent email,” the third in the last twenty minutes, that requires an immediate response. It’s no wonder Mi-ki-naak has amnesia…