What a Strange Time Machine?

Tami smiled. Discussions about “Uncle Jerry’s Cadillac” have been a part of her family gatherings for over four decades. The story of how Uncle Jerry acquired the car was always the same: the car was a gift from General Motors to a union executive. Uncle Jerry did odd jobs for the gentleman and admired that Cadillac. He hoped to own it one day, and did.

There were other tales of high adventure driving the ’59 Sedan De Ville. In the 1970s, Uncle Jerry added a clamp-on bumper hitch and towed a trailer heaped full with his and Aunt Barb’s possessions to Michigan’s Upper Peninsula. The clamp-on side mirrors are still in the trunk, but the bumper hitch is lost to eternity.

In her own special way, Aunt Barb shared fond recollections of Sunday trips to church, then out to eat followed by an afternoon drive. In the early 1990s, Aunt Barb oversaw the professional restoration of Uncle Jerry’s Cadillac, which took over a year. When the ’59 Cadillac returned to “bright and shiny,” Uncle Jerry babied it, but didn’t drive it like he did with the rust and dings of an active life. After he passed away, Aunt Barb moved the car from the garage to a heated warehouse. She talked about the Sedan De Ville for a while, then forgot about it. 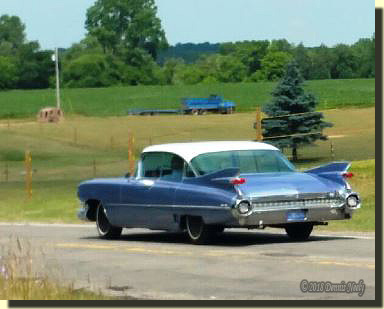 I realize this is a bit of a departure from romping through the 18th-century glade. But then again, swinging open a heavy, all-steel sedan door and taking a whiff of the aroma of the Buddy Holly and Bill Haley era does rival the captivating scent of drying oak leaves and wild mint. One has to settle in to that big, cloth-covered bench seat, grip the large, slender steering wheel and take in the view out over the massive hood of a ’59 Caddy at least once in this life. A couple pumps on the gas pedal primes the carburetor, a turn of the key and then 390 cubic inches of a long-forgotten Detroit V-8 roar to life with a gentle shake of the entire chassis. Touring the open road in a ’59 Sedan De Ville is time traveling, too.

Uncle Jerry’s ’59 Sedan De Ville is now part of Aunt Barb’s estate—the prime beneficiary is her church. As per her wishes it’s time to pass this historic piece of Americana on to another owner who will love it like Uncle Jerry did.

Dear reader, if you have a desire to step back to the glory days of American manufacturing excellence, or know someone who does, please respond to or forward my email address. Put “Uncle Jerry’s ’59 Cadillac” in the subject line. The ’59 Sedan De Ville is appraised at $32,800.00 (not including a trunk full of additional parts and a shop manual), and Aunt Barb’s personal representative is asking $29,500.00. The car is located in southern Michigan.

Travel back to the Golden Age of Rock ‘n Roll, be safe and may God bless you.

This entry was posted in Uncategorized. Bookmark the permalink.